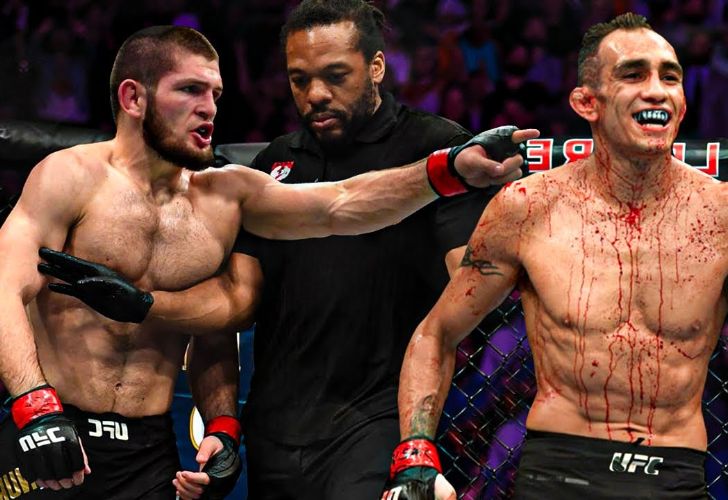 The Ultimate Fighting Championship, or UFC, is home to some of the greatest mixed martial artists on the planet. However, with every fighter split up into different weight classes, there’s still always the question of who’s the best. Well, here’s an attempt to answer that question. Ordinarily, Power Rankings are used when describing teams. Let’s try to apply that logic to individual UFC fighters.

Until Moreno dropped the flyweight title to Deiveson Figueiredo in January, he was undefeated for three-and-a-half years. He seemed to have formed a rivalry with the Brazilian, having several close bouts with him. However, his lack of a perfect record is what has him knocked out of the top ten.

Sterling had been subject to some ridicule, having won his bantamweight title via disqualification in 2020. Petr Yan had landed an illegal knee to Sterling that left him unable to continue, hence the disqualification. Unfortunately, due a neck injury, Sterling had to wait an entire year before he could get his rematch with Yan. He managed to silence some doubters by winning a narrow decision against Yan last April. And that led to his seventh straight win.

Of his last seven fights, Max Holloway had lost four. Although, some of those loses were at lightweight and one was from a controversial point loss. Although, he still seems to be in his prime. And when he wins, he’s certainly mesmerizing in his performances. Although, he dropped from a potential top ten placement when he lost for the third time against Alexander Volkanovski.

Covington is still one of the best 170 pound fighters on the planet, just behind Kamaru Usman and maybe Leon Edwards. He was the former interim welterweight title holder. However, he hasn’t managed to get it back from Usman, having lost to him two more times in the last three years, as well as losing once to Edwards.

In the last six years, Poirier has only known two defeats. Fighting one of the greatest lightweight fighters in Khabib Nurmagomedov and Charles Oliveira has proven how great he is in the lightweight class. Nicknamed the “Diamon”, he’s also won against five different former world champions, including Conor McGregor twice in 2021.

Stipe Miocic is a part-time firefighter, but a full-time UFC fighter. He has the record for the most successful title defenses in his division. And the heavyweight class is known to be the most difficult one to hold on to. Although, that lead streak came to an end in March 2021 when he was defeated by Francis Ngannou. Despite this, he still has impressive past victories over Daniel Cormier, Junior dos Santos, Fabricio Werdum, Andrei Arlovski, and Ngannou, himself.

Petr Yan went five years without a loss until his disqualification in his bought against the aforementioned Sterling. His fighting skill has stayed acute, claiming the interim gold against Cory Sandhagen. Considering his superior performance against Sterling, many considered him the true bantamweight champion for a time, even after losing his closely contested rematch with Sterling.

Leon Edwards was the second ever UFC champion to hail from Great Britain, gaining the title after his knockout against Kamaru Usman. No fighter in the UFC had ever accomplished this. He’s been unbeaten since his victory in 2015, including wins against former lightweight champ Rafael dos Anjos and fan favorites Nate Diaz and Donald Cerrone.

In the last eight years, Whittaker has only lost two fights. Both of those being to skilled fighter and rival Israel Adesanya for the middleweight belt. And it was by TKO. His road to the belt saw him go up against a murderers’ row of opponents. Yet his still managed to come out on top.

Ngannou is considered the hardest hitter in the sport. People refer to the heavy champion as the “baddest man on the planet”. He has twelve knockouts to his name, several of them achieved in under a minute. While he had back-to-back decision losses in 2018, he’s since made up for it with four first-round KOs, avenging a defeat at the hands of Miocic to secure the gold. He even managed to outwrestle interim champion Ciryl Gane for a successful first title defense in January.

Oliveira had an inconsistent record during his debut to the UFC. However, since moving from the featherweight class to the lightweight, he’s managed to turn his career around. He won 11 fights in a row over the last five years. He was even considered the successor to the retired Khabib. Of his 33 victories as a pro, he’s accomplished 30 of them through stoppage. He was recently stripped of his title due to a weight miss. But his win over Justin Gaethie in the first round the next day immediately established him as the number one contender.

The former kickboxer made an explosive entry into the sport. He’s become one of the most exciting fighters in MMA history, even earning himself the moniker the “Last Stylebender”. He didn’t suffer his first defeat until 2021. But then he moved up a weight class to challenge Jan Blachowicz, the light heavyweight champion, for the title. He’s since managed back-to-back rematch wins against Marvin Vettori and Whittaker.

Kamaru Usman is arguably one of the best MMA fighters in the world, let alone the UFC. Of course, arguably, hence why he’s only number two on this list. He extended his unbeaten run for nine years with a 19-fight win streak. He even got a title win in 2019 and defended it five more times until a knockout defeat at the hands of Leon Edwards.

Volkanovski only suffered one defeat in 2013 during his professional career. He won 22 fights in a row during that time. His only professional loss was actually against a welterweight champion. Six of his last seven fights were against elite featherweights. He’s displayed a ferocity and skill that’s allowed him to lay out many of the most skilled featherweight fighters in the UFC.