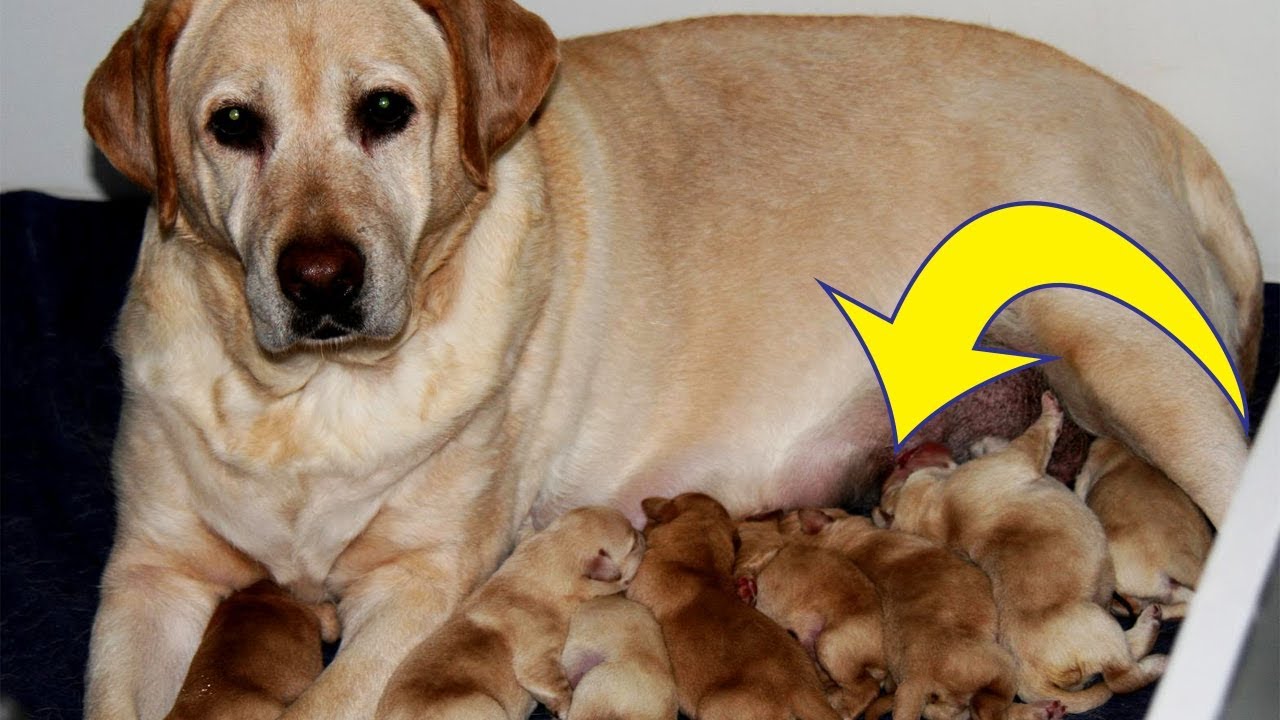 Dogs are really man’s best friend. Quite a lot of people enjoy the company of the animals. John and Katie Black probably had a similar idea when the adopted a pregnant golden retriever. The Blacks’ foster dog was pregnant when they took in it, but they never expected this when it finally gave birth.

John and Katie Black are no stranger to dogs. Far from it, in fact. Natives of Raleigh, North Carolina they own three other pets named Annie, Leroy, and Winchester. They’ve been offering their house as a foster home for any canines in need of one, and in that time, they’ve seen 20 dogs come in and out their door.

Currently, the Blacks are registered with the Neuse River Golden Retriever Rescue shelter as foster owners. They don’t take care of dogs for recognition, only the love of the animal, but have since gotten quite a bit of attention from taking care of their latest litter. After all, it is a particularly interesting litter.

The name of the mother is Rosie, a golden retriever mix who had been through quite the ordeal. In October of 2017, her previous owners had left her at a local shelter. Not only was Rosie now homeless, but she was also pregnant, and very close to giving birth. The facility’s manager was actually afraid she’d give birth in the shelter.

Fortunately, the shelter manager knew exactly what to do and called the caretakers at Neuse River. They sent a volunteer to pick up Rosie, who was equally as worried about Rosie’s pregnancy. They half-expected the dog to give birth as they drove her to a check-up at Raleigh Vet Clinic.

However, when Rosie arrived at the Blacks’ home in late October, she was still pregnant. After Rosie had settled in, the couple took a picture of her and posted it on their Instagram account @ourgoldenyears. The captain read as “This is our new foster Rosie, who is very preggers and close to delivering her puppies. She is a little shy and scared, but very sweet.”

Not long after taking her in, Rosie finally gave birth. And the results were… surprising, to say the least. As it turns out, Rosie didn’t give birth to dogs, but cows. Or, more accurately, dogs with the fur pattern of cows. It was pretty bizarre how little the pups took after their mother in terms of general. Katie updated her followers in November, saying, “Not quite the puppy pile we were expecting, but we will gladly take four baby cows”.

Rosie had given birth to a litter of four puppies. Three had the same black and white pattern, but the fourth had a little bit lighter fur, making it a little bit more brown than the others.

The Blacks’ friends and family really got a kick out of the strange appearance of the puppies. One person that especially found their look funny was Katie’s father. “My dad laughed for quite a while at the photos, initially,” Katie told a reporter from the Press Association later in November.

It was during that conversation with her father that he suggested she post it somewhere. As such, she quickly uploaded an image of Rosie with her pups on Reddit. They had been aptly named Clarabelle, Betsy, Daisy, and Moo. As it turned out, people couldn’t get enough of these puppies-turned-cows. The post received 90,000 upvotes and 1,600 comments.

Quite a few Redditors had something to say about the posted image. “Mama looks as confused about this as everyone else”, one commenter said. Another offered an explanation for their expression; “It’s guilt. Her boyfriend’s a black lab and he’s coming home any minute now.”

Speaking of the boyfriends, it’s actually unknown who the father of the puppies was. After all, Rosie had been brought to them while she was already in active labor. They don’t know what breed Rosie’s mate was, let alone which dog specifically. On the bright side, the puppies still had a caring and loving mother, even if they didn’t have a father.

Unfortunately, shortly after giving birth, Rosie came down with a bad infection. Of course, she was given a course of antibiotics and her foster family helped take care of her pups.

Katie and John were more than happy to help bottle feed the puppies while Rosie was recovering. They were so cute, in fact that the couple had trouble keeping their hands off of the little bundles of joy.

Too Cute And Too Small

Katie especially had difficulty not “eating up” the puppies. Her favorite appeared to be Daisy, saying “Practicing some AMAZING self-restraint in not biting Daisy’s tiny paws” in an Instagram post. It’s completely understandable, just look at how cute and cuddly they are.

But in the next couple of months, the four grew up fast and developed their own personalities. In an Instagram post, Katie described the tykes as follows; “Daisy is a sweetheart but a little anxious/shy/hesitant/fearful. Clarabelle is a hilarious, fearless spitfire. Moo is a snuggly baby that likes to be held and cries when he wants attention. [And Betsy is] the sweetest and most gentle puppy, and I want to keep her!” Unfortunately, the puppies grew up too fast, and it was soon time to say goodbye.

In the first few weeks of January 2018, two different families adopted Clarabelle and Betsy. They were nice families with excellent kids that loved the pups. Although John and Katie were sad to see them go, they knew they would be in a better home.

Daisy and Moo were with the Blacks for a little while longer, but would eventually have to move on to new homes as well. But all of the puppies were able to benefit from the love and care of Katie, John, and of course, their mother, Rosie.