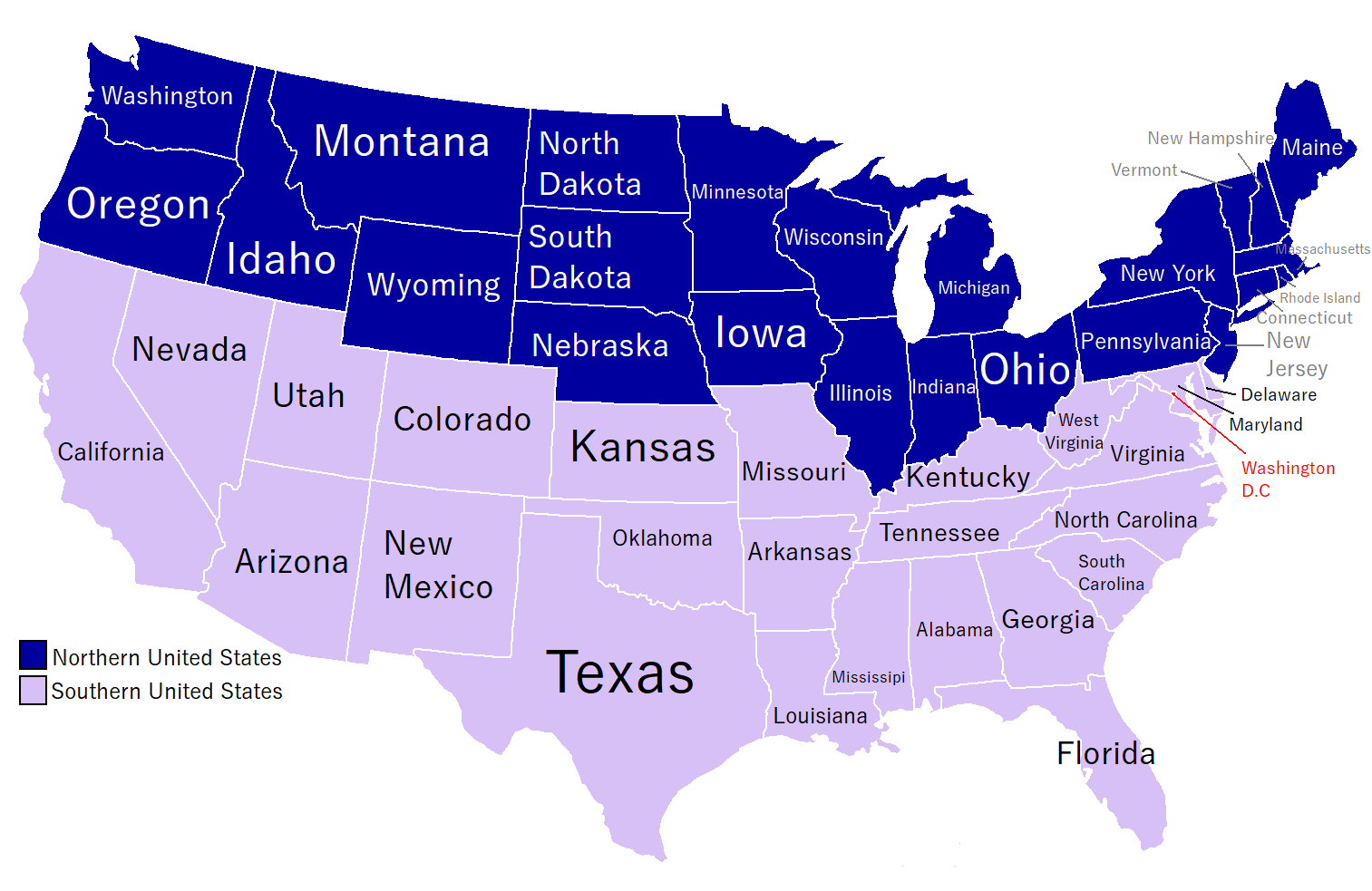 People from the north sometimes act like the south is a strange place, filled with even stranger people. But, to be fair, cultural differences exist all throughout the world, even within one’s own country. What’s strange to one person will be completely normal in another part of the world. And that’s why some of the things northerners do seem so strange to southerners as well. Here are a few examples in the United States.

In the South, life tends to be slower and more relaxed. Southerners will often talk to each other and just chat when out on a walk or out running errands. They’ll even talk to strangers. However, people in the north tend to do the opposite. There’s a social norm in northern states where you just don’t bother people you don’t know. Northerners find this behavior “nosy”, but southerners just think it’s friendly.

In the South, it’s just good manners to say “ma’am” and “sir” when you’re addressing people. But people in the North just don’t say it. Some Northerners even find this strange. Southerners just find the omission to be a little rude.

You’re probably familiar with the idea of Southerners calling people “sweetie”, “sugar”, or “honey”. In many states, they’re considered a term of endearment. But in the North, the words seem more condescending. According to the U.S. Department of the Interior’s Office of Civil Rights, some of those words are even considered unprofessional in the workplace.

To a Southerner, everything that Northerners do just seems too fast. They drive fast, walk fast, order fast, and most importantly, talk fast. At the same time, Northerners seem to get frustrated because Southerners talk too slow. Southern accents just have more drawn-out vowels and twangs, but Northern ones don’t have anything to really slow them down.

Northerners Are Always In A Hurry

Earlier, we mentioned how Northerners seem to do everything quickly to Southerners, but mainly focused on them talking. Well, they do seem to be in a rush to get to places too. Northerners live busier lives on average and want everything to move quickly and efficiently. To Southerners, they’re hurrying for not real reason. And when a Northerner visits a Southern state, they can find themselves frustrated with how slow life is there in comparison.

Now, Northerners don’t try to be rude, they just come across as a little bit more brash to Southerners. It’s another part of the fact that Northerners and Southerners have slightly different manners when it comes to speaking. Northerners may say something like “Lemme get…” while ordering at a restaurant. And a waiter may take exception with that.

In the West and North, they’re called shopping carts. But in the South, they’re called buggies. This difference in name is minor in the grand scheme of things, but just creates a fair amount of confusion when talking about them to someone from a different of the country. Fun fact: if you’re in England, they call them shopping trolleys.

Apparently there’s a slight difference in regional dialect when people are standing in a queue. People from the north may refer to this as waiting “on line”. In comparison, people in the South may refer to it as waiting “in line”. It’s a minor thing, but can lead to quite a big debacle about vernacular between the two groups.

The South is well-known for its large amount of delicious and interesting fried food. But the North has a lot fewer fried foods in comparison. Apparently, a lot of Northerners don’t even know what hush puppies are. A lot of the most famous southern, fried foods can only be found in the North at very niche restaurants.

Fried Chicken Is Too Bland

Southerners probably hate northern cornbread. Cornbread is traditionally made with cornmeal, butter or bacon grease, and buttermilk. The important difference comes in with how southern cornbread lacks sugar. According to some southerners, proper cornbread simply should not be sweet. One even said to Southern Living that “Sweet cornbread is called ‘cake'”.

Catfish is incredibly popular in the South. Certain dishes even remind them of their childhood. But Northerners seem to despise catfish as a food. A lot of Northern catfish species aren’t particularly good in the first place. Southerners just can’t comprehend why anyone would not want to even try catfish.

There are actually a lot of people in the North that don’t even know what okra. That’s even stranger to Southerners, as it’s a staple part of most meals in the South. They especially love to deep fry the vegetable. In Irmo, South Carolina, they even have an annual “Okra Strut Festival”.

Potato salad is a pretty polarizing side dish. People in the North seem to prefer vinegar-based potato salad. In comparison, this baffles Southerners, who prefer a creamy mayonnaise base. Although, both sides agree that anyone that likes both is just bizarre.

Where To Find Good Mexican Food And BBQ

There are a few states on the Mexican/US border in the South, so the South having generally excellent Mexican food is unsurprising. They also have a longstanding barbecue tradition. But the farther North you go, the more the quality of Mexican and BBQ food goes down. Northerners grill multiple meats instead of slow-roasting them, and the sauce might even taste different.

Northerners after making bacon tend to toss the excess grease to avoid fat consumption. But Southerners make sure to save it. Not only do they use it to add more flavor to various foods, they can also use it to clean the pan. Donald Tomlin from the magazine Garden & Gun actually called bacon grease “Southern olive oil”.

Have you ever heard of Zaxby’s? How about Waffle House? Bojangle’s? Whataburger? Or maybe Cookout? Those are all restaurant chains found only in the South. While Northerners may be familiar with their names, it’s much less likely that they’ve ever actually tried their food. Southerners moving to the North may be mortified to find out how few of their favorite restaurants aren’t there.

The word “dinner” has different meanings to people in the North and South. In the North, dinner is an evening or nighttime meal, the last of the big three meals you’ll have throughout the day. In the South, dinner is your big afternoon meal. In place of Northern dinner is Supper. If a Northerner and a Southerner attempt to make plans for “getting dinner”, deciding on a time to arrive at the restaurant is a requirement.

People have different words for soft drinks depending on what part of the US you live in. Northerners normally say “soda” and people in the midwest say “pop”. But in the South they call it “Coke”. Northerners only refer to Coca-Cola as Coke, so this can get pretty confusing when a Southerner orders a “Coke” in a Northern restaurant.

Sweet tea is a staple drink of the South. To make it, you pour sugar in the tea while it’s still hot then serve it over ice. But in the North, instead people mostly drink iced tea. People put the ice in the tea first then put the sugar in it. In iced tea, the sugar won’t actually dissolve properly in cold water and just sit at the bottom. Southerners that give this drink a try will probably be disappointed by its quality.

The brewing of coffee between the North and South are radically different. Most Southerners home brew it. Most Northerners just use instant coffee. Not to mention, iced coffee is a lot more common in the North than the South. While strange to them, Southerners may be surprised to find out that more than half the world actually prefers instant coffee. Even if it’s not as good, it is easier to get ready.

Cheerwine is a cherry-flavored soft drink from North Carolina. It pairs well with barbecue and. surprisingly doesn’t have any alcohol in it, given the name. It’s a pretty popular beverage in the South, but you’d be hard-pressed to find a Northerner that’s even heard of it.

Koozies is a cushiony foam drink holder that keeps cans and bottles cold. They’re used by Southerns to keep their drinks cold, even in the hot summer. Some even make custom koozies as wedding favors. Of course, the North doesn’t have these, as the weather is far less temperate than in the South.