The Worst Haircuts In Human History - The Delite Skip to content

The Worst Haircuts In Human History 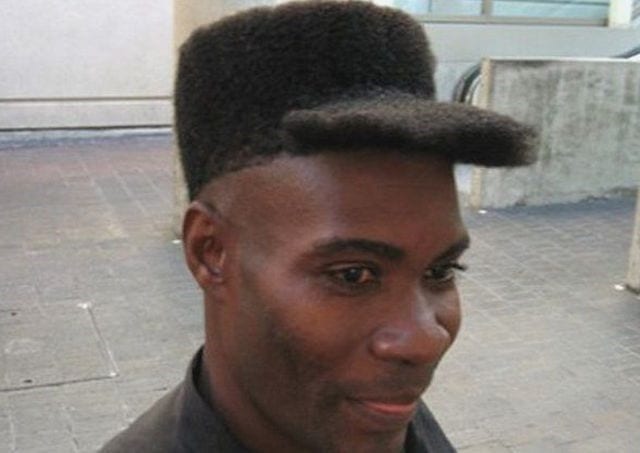 You’ve had hair days. You’ve seen bad haircuts. But have you ever seen a haircut so bad it made you wonder what kind of dare this person lost? Well, here are some haircuts that can rightly claim a title as some of the worst in human history.

The amount of detail that went into this design is actually impressive. However, there isn’t much of a reason to have the Oreo label on your head. Not unless you rented out your hair to sell ad space.

This cotton candy hair color was crazy enough. But this person went the extra mile to have some unicorns in their braids. It looks like a little carousel that the horses are walking around.

You may have seen people get their hair cut in ways that resemble animals before, but probably not like this. After all, who gets their head shaved to resemble a gecko? It even has a small tail.

Either they really like pineapples or they really like Spongebob Squarepants. There’s also a chance they just like hair dye and did this without even thinking about it. However, that’s doubtful, considering the pineapple-like pattern on the back of their head.

This one doesn’t use hair to form its surface. Instead, we’ve got what appears to be nickels. This could be some mid-hair appointment type of thing, but it still looks incredibly ridiculous on its own.

He had his hair died to form the rings of a bee’s rear, that would have been ridiculous enough. But then they went the extra mile and had the hair on the back of their head shaped into a stinger. Now that’s some commitment. Still looks bad though.

How do you even get your hair fashioned into this shape? At least they don’t have to worry about the sun getting in their eyes.

Men with braids, honestly not that strange. It’s the kind of braid that makes it a particularly bad aesthetic. Having your braids float in front of your face like bangs is just a bad look.

This haircut evokes the haircut of two of the Three Stooges, Curly and Larry. Curly because they’re bald in the middle and Larry because of the curly hair on the sides. Yes, it’s not a very good look on anyone, let alone a young woman.

It just seems like this person didn’t have enough hair to do a proper topknot. Either that or they just didn’t know how to make one properly. Either way, it looks very messy and haphazard.

And this one is the viola. Seriously, how do you grow enough hair to be able to do this kind of thing? This person must really be dedicated to violas.

The two thick strands of hair they’ve got here look more like a mustache than anything else. So of course they shaved the rest of their head to accentuate how amazing their new style looks.

To an untrained eye, this might actually work in tricking someone into thinking you’re awake. But if you’re at a lecture and your professor is wearing glasses, you might get found out pretty easily. Regardless, your hair’s going to look a little weird in just the day to day.

There are no words to really describe what kind of haircut this is. Shaved areas, pigtails, and whatever that front part’s supposed to be called. It’s all just a hodgepodge of different ideas and it is not flattering at all.

Ring Around The Head

Well, this has to have been a lost dare or something. No normal person is going to ordinarily get their hair cut like this. Although, how clean it looks is rather impressive.

This is one of those cases where it was actually a prank. It’s not super common in the NFL, but sometimes players get hazed. And that’s how this man ended up with no hair on the top of his head.

They should’ve gone with either the flat top or the long hair, not both. The two of them together really just makes this kid look ridiculous. Hopefully they corrected their mistake sometime after this yearbook photo was taken.

There are a couple other animals you could probably compare this to, but the most accurate is probably the mythological griffin. And this hairstyle is certainly mythological. In regards to the fact that no one else will believe you when you hear about it. You have to see it to believe this thing exists.

Not Quite A Combover

Well, it’s not quite a combover, although it looks like they tried. It’s just a real shame that this is the only hair they have on their head. Looks like someone shaved most of it off against their will.

The beard and side of the head actually looks pretty clean. But after you get to the top of the head the rest of the look falls apart. The mohawk/afro looks crazy enough, but that white part at the end really gives off skunk color vibes.

How much mousse did they use to get their hair like this? Hopefully they didn’t go out in public like this, they look absolutely ridiculous.

How much of this is actually their hair? It looks like they put a tumbleweed on their head. This puts some of the big hairstyles in Texas to shame.

How does this even happen? Was the lower half of the bangs growing out of their forehead? How it happened probably doesn’t really matter, cause it looks like the subject isn’t happy about it either.

You can actually find a few different photos of this kid’s year book photos online. That shouldn’t be too surprising though, just look at her mullet. It’s actually impressive, although not exactly stylish either.