The Truth About Nancy Pelosi - The Delite Skip to content 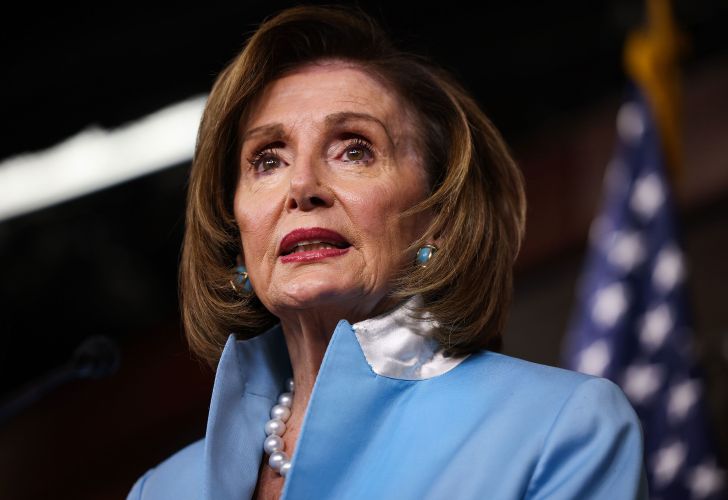 With the 118th Congress having met, Nancy Pelosi’s time as Speaker of the House has come to an end. She was often criticized for her policies and actions, but certainly had an impact on American politics during her latest four year tenure. But, there are some things that many people don’t know about Nancy Pelosi, her upbringing, her education, and what drove her to becoming the Speaker of the House in the first place.

Politics really do seem to run in the Pelosi family. Her father is Thomas “Big Tommy” D’Alesandro Jr. He was a Congressman from Maryland back during World War II, as well as a three-time mayor of Baltimore. It’s believed that’s what motivated her political career to begin with.

It wasn’t just Nancy’s father that was a politician, but her brother as well. His name was Thomas “Young Tommy” D’Alesandro III. He served on the Baltimore City Council an was even the mayor for one term. He died in 2019 at the age of 80. But at least he got to see his younger sister become the Speaker of the House.

An Early Interest In Politics

Pelosi was taught the art of politics by her mother, who was also active in politics. Pelosi would help out her father with campaigning while he was running for office. She even attended John F. Kennedy’s inaugural address.

Pelosi ended up graduating from the Institute of Notre Dame in Baltimore, an all-girls school. And for college she attended Trinity College in Washington D.C. As one would expect, she received her Bachelor’s Degree in political science.

Pelosi’s rise in politics began when she moved to San Francisco in 1969 with her husband, Paul. She started out by working as a volunteer for the local Democratic Party. And they certainly took advantage of her fundraising skills.

Rising Through The Ranks

In less than a decade, Pelosi was able to catapult her way through the Democratic Party’s infrastructure. She was the DNC’s California committeewoman by 1976. And she held this title while also serving as chair of the California State Democratic Party and the finance chairman for their senate campaign committee. In 1984 she chaired the host committee for the DNC convention.

Pelosi was a skilled politician, but it helped that she had strong backers in her early years. People like Phil and John Burton were powerful movers and shakers in San Francisco politics. And after Phil Burton died, his wife Sala took his place in Congress following a special election. A dying Sala was actually the one that encouraged Pelosi to run in a special election that led her into Congress in 1987.

Something that people seem to forget nowadays was that Nancy Pelosi’s tenure as Speaker of the House from 2019 to 2022 was her second time holding the title. Her first term was between 2007 to 2011. And that led to an interesting relationship with one of the former presidents.

While Pelosi’s feud with Donald Trump has been well-documented in recent years, she had a much more complex relationship with former Republican president George W. Bush. They clashed on occasion and disagreed even more on policies.

Pelosi felt Bush was incredibly irresponsible when it came to financial matters and the conflict in the Middle East. Her spokesman actually told Vox, “There aren’t enough words to describe how outraged [Pelosi] was with George Bush and his policies.”

Despite her disagreement with his policies, Pelosi actually helped to stop Democratic attempts to impeach Bush in 2006. She even went as far as to tell the press, “Impeachment is off the table.”

Donald Trump was actually one of the biggest critics of this move, feeling that Bush deserved to be impeached for his alleged lies to the country. Although his feelings towards the necessity of impeachment may have changed in the coming years.

Of course, after her first tenure as Speaker ended, Pelosi didn’t leave Congress. She spent time as the House Minority Leader, as well as the Minority Whip and, holding this position for the longest period of time, the House Democratic Leader.

Although, parts of Pelosi’s time in office weren’t exactly about bi-partisanship or even arguably positive. For example, the Iraq War was strongly opposed because of the usage of waterboarding to torture people for information. These so-called “enhanced interrogation techniques” as called by the CIA, were an open secret in regards to getting information from terror suspects.

Pelosi was openly opposed to the Iraq War, but not so much about waterboarding. Or at least so it seems. Depending on who you ask, it seemed as though she just lied to score political points.

According to the Washington Post, Pelosi and other members of Congress were briefed in 2002 about the CIA plan to use waterboarding. And apparently, at the time, she allegedly had no objections. The CIA actually says that they were encouraged to proceed with these plans.

However, according to NPR, Pelosi claimed she heard about waterboarding as a hypothetical scenario that would not be performed. Pelosi actually accused the CIA of lying about this. Although, to this day, the full truth of the matter is unknown.

However, other than her relationship with George W. Bush or even the CIA’s waterboarding, Pelosi’s most complicated relationship has been with her Catholic faith. While certain tenets of Catholicism implies a need to deny the marriage equality of homosexual Americans, Pelosi has been a steadfast supporter of gay rights. She voted against the Defense of Marriage Act in 1996, supported the Hates Crimes Prevention Act, and supported repealing “Don’t Ask, Don’t Tell”. She also supported the Equality Act, although it has not yet passed into law.

Pelosi’s support of gay marriage came to a head in 2012, when she supported Barack Obama’s call for legalizing gay marriage. People wondered how she could justify that given her faith. And in response, she said this; “My religion compels me… to be against discrimination of any kind.”

A decade after this event, Pelosi ended up being denied a Holy Communion by the archbishop of San Francisco. This was because of her support of Roe v. Wade in addition to her previous actions in support of gay rights.

Of course, as many other lifelong politicians, Nancy Pelosi’s been involved in her fair share of scandals. Two of them have even threatened her entire political career. But just what are those scandals?

The first of these scandals involved Pelosi’ stance on trading stocks. Her husband is actually a successful venture capitalist. As such, her political opponents have accused her of violating the STOCK Act. It was intended to keep politicians from profiting off of their insider knowledge and legislation in Congress.

There’s no way of knowing whether or not she actually violated the law or not. But when Business Insider asked her point-blank if Congress should be allowed to trade stocks themselves, she said they should because “We are a free-market economy”. This was a rather controversial statement, considering that Congress banning members of Congress from stock trading was a law that had broad, bipartisan support.

Another of her controversies once again involved her husband. And it was as recent as May 2022. That would be when Paul Pelosi crashed his car near their estate. He was arrested for drunk driving. Their estate actually has a winery on the premises. Nancy absolutely refused to comment on the matter, seemingly not caring how his actions put the lives of others in danger.

Paul pled guilty to the misdemeanor DUI and was charged on August 23rd the same year. He was sentenced to five days in prison and three years on probation. Many critics were enraged by this, calling it a slap on the wrist compared to most other punishments. However, as bad as these scandals are, they were mostly related to Paul Pelosi instead of the former Speaker.

And yet, bad things seem to continue to befall Paul Pelosi. In October 2022, man broke into the Pelosi residence in San Francisco. He attacked Paul, demanding to know his wife’s whereabouts and beat him with a hammer.

The person who attacked him was named Paul DePape, a 42-year-old man. He was charged with attempting to kidnap Nancy Pelosi, assaulting a relative of a federal official, and six other federal crimes. And apparently he planned on attacking other politicians as well.

It’s somewhat telling what kind of figure Pelosi is, as well as the state of the union, that many people had no sympathy to give to the former Speaker and her family. While many Democrats gave support, there were several prominent Republicans, such as Steven Bannon that claimed it was a “false flag” incident.

Regardless of how controversial a figure Nancy Pelosi is, it’s undeniable that she’s had a profound effect on the United States. She was the first woman to become Speaker of the House after all. And she hasn’t exactly been quiet about her political views and ideals. Her time as Speaker has come to an end. It’ll be a wonder to see how history remembers her actions.