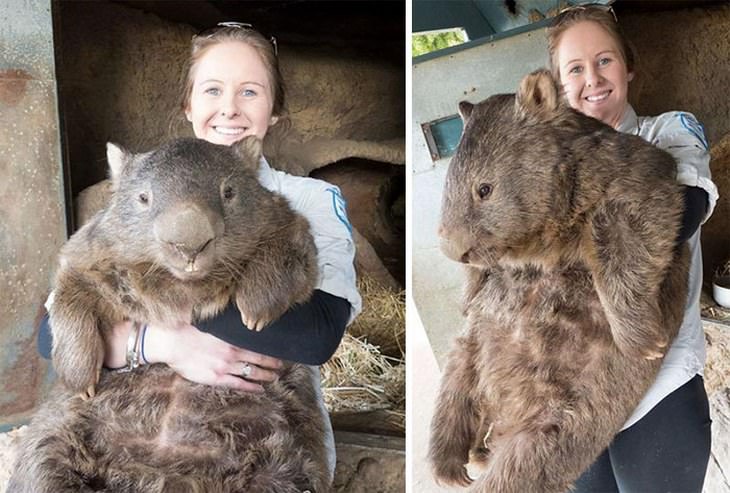 Sometimes you hear how large an animal is, but it never really clicks in your head how large that’s supposed to be. Some people just have no sense of scale. Well, here are some images that might help you understand how big (or small) some of the most interesting creatures on Earth actually are.

Everyone sees pictures of grubs. It’s not too hard to identify them solely based on appearance, but some species can get particularly large, such as these ones here. About the size of your palm, these ones will eventually grow into beetles, probably around the same size.

As far as whales go, gray whales are on the smaller side of things. But still being whales means that they’re absolutely massive. They grow to be around 39 feet in length. Of course, a number alone won’t help you visualize. Just the head of this big whale is is about the length of this speedboat.

The coconut crabs are also known as robbers crabs, as they’re known to steal anything that their acute sense of smell can pick up food on. They’re well-known for knocking over trash cans so that they can get to the garbage inside. It’s not a difficult feat for the world’s largest land arthropod. Although, they’re most famous for eating coconuts, their namesake, which they’re capable of breaking open al by themselves. Humans normally need a machete. Coconut crabs with more access to coconuts actually grow larger than coconut crabs that don’t

The flying fox is the largest species of bat alive nowadays. Despite their intimidating size, they’re probably the least harmful bat to humans. They survive off of fruits and insects mostly. A few sub-species are actually diurnal, meaning they’re active during the day, as opposed to nocturnal. This is hypothesized to be related to a lack of natural predators. Not too surprising given their size.

This rabbit’s pretty cute, despite its size. This is the Flemish giant rabbit. Most of them are around 15 pounds, but a few can weigh up to 22. They’re actually very easy to domesticate and make docile and loving pets.

Let’s take a break from giant animals and take a look at something incredibly small. Ghost crabs normally have one claw that’s larger than the other, but it’s harder to tell when they’re still just babies. They’re nocturnal as well, and most nocturnal animals tend to be on the smaller size, but this is taking it to extremes.

Back to massive organisms, but for plants instead of animals. These are redwood trees, named for the color of their bark. They’re capable of growing up to 380-feet tall with a 20-foot wide diameter trunk. The most well-known grouping of these beauties is in Sequoia National Park in California.

The lion’s mane jellyfish is one of the largest jelly fish species around. It’s found primarily in the English Channel and Irish sea. The largest one recorded had a body measuring seven feet in diameter and tentacles that stretched over 120 feet long. It’d be pretty bad news to get tangled up in one of these.

The anaconda is the largest snake in the world. And looking at this one being lifted with construction equipment, it’s easy to see how. This South American constrictor is one big muscle, 25 feet long and 550 pounds. Some of the anaconda’s most notable prey includes caimans, a somewhat smaller relative of the crocodile native to South America.

The leatherback turtle is the largest turtle in the world. And this photo really puts into perspective how large that is. It look like you can ride one, although that’s probably a bad idea. This particular species of turtle doesn’t have a bony shell for protection. Some of the largest ones can grow up to 8.9 feet in length.

We just looked at a big turtle, now let’s look at a small version of its land-dwelling cousin. Tortoises are around the same size as the average turtle in adulthood, but they’re also just as small as children. Here you can see this baby tortoise is barely larger than the strawberry it’s trying to eat.

It’s not entirely clear what species of tree this is that washed up on shore, but it seems like it could give the redwoods from earlier a run for their money. The only thing that could probably move this thing is the ocean itself, which is what led to this tree washing up on this beach in the first place.

Some breeds of dogs can get truly massive, and the Tibetan mastiff is one of them. It has a double-fur coat for colder climates that makes it look a larger than it truly is, but that doesn’t mean much when you hear its weight. That’s 160 pounds by the way.

The disparity in size between baby and adult hippos is quite staggering. Females of the species can as much as 2,800 pounds. Males are even heavier at 3,300. And babies? Those can weigh as little as 55 pounds right after birth. The one pictured here isn’t exactly a newborn, but the difference in sizes is pretty clear.

The first live photos of a giant squid in its natural environment are as recent as 2004. And it wasn’t until then that people could really see how big these creatures are. Males have been measured as long as 43 feet. Females have been measured as long as 60. And to put into perspective of how long that may be, only the head of the squid is visible in this picture. The tentacles make up for at least half the squid’s length.

The wombat pictured here is named Fat Pat from Ballarat. The nickname stems from Ballarat wildlife park, where Fat Pat is from. He’s the oldest wombat known, at 29 years old. He’s also one of the largest at 88 pounds. Some people seem to be unaware of how large these things truly are. To put it into perspective, these creatures are so large and sturdy, that hitting them with a car is more likely to flip your car over than actually kill the wombat.

The blue whale is the largest creature to ever live on Earth. And with that size also comes the world’s largest heart. That heart is about the size of a small, compact sedan and weighs around 400 pounds. As you can see in this model, a person could fully climb into and hide in one of the whale’s aortas.

The common eagle is surprisingly light. It only weighs 15 pounds by its adult stage, but its wingspan is more than seven feet. That’s longer than most humans are tall. And as you can see, its talons are about the same size a human hand. Those beauties are capable of inflicting 1,000 pounds per square inch of force. They may not weigh much, but they’re certainly strong.

Something about the snail being giant actually makes it kinda cute. It looks a little bit like a rabbit. Albeit, just a little bit. For the more faint of heart, knowing that there’s a snail as big as your hand is probably terrifying. Just make sure you’re not slow enough that it can catch you.

People seem to not understand how big and powerful a moose is. An adult male can weigh over 1,500 pounds, stand up to seven feet tall, and be as long as 10 feet. They’re actually the last surviving species of North America’s megafauna. That’s animals like giant sloths wooly mammoths. So of course they’re going to be big.

People know that wolves are big, but it seems as though their understanding of how big has been warped by popular media. In movies and television, most people use huskies, a breed of dog, as wolf stand-ins. Wolves are much bigger than huskies. The gray wolf is actually the largest, living canid species.

This image is more a diagram than a photo, but there’s good reason for that. This is a to scale photo of a couple of cells and a fairyfly. The fairyfly is the smallest animal on the planet, so small that several members of its species are literally microscopic. They’re technically classed as wasps, but you definitely won’t feel it if these things sting you.

The saltwater crocodile is the largest crocodilian alive. And frankly, they’re terrifying. All those images of massive and scary crocodiles you see are normally of saltwater crocodiles. The largest one ever held in captivity was named Lolong, measuring at over 20 feet long. It even made it into the Guinness Book of World Records in 2012.