The Most Ridiculous Cosplays And Costumes - The Delite Skip to content 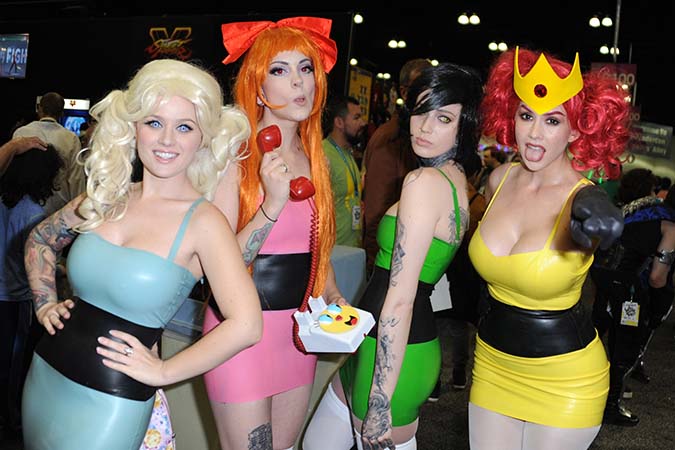 Sci fi, fantasy, comics, and all the other things that make up pop culture, act as inspiration for others. People often dress up as their favorite characters, either on social media or at conventions. And more often than not, those people add a little bit of personal flair to those costumes. And sometimes a lot of personal flair. Here are some of the most ridiculous (and revealing) cosplays and costumes.

BB-8 was really the breakout star in the Star Wars sequel trilogy. Showing your appreciation for the character isn’t too unexpected. Although, you wouldn’t ordinarily expect someone to dress up in a sexy version of a BB-8 costume.

The Ghost in the Shell movie wasn’t very well-received, but it still has its fans. Regardless of how you may feel about it, you have to admit that this is a very good costume. It matches the body suit Scarlet Johansson wore perfectly, and the wig, itself, is also spot-on.

Here we’ve got a combo showing appreciation for two franchises: Star Wars and Aladdin. We’ve got Jasmin in a slave Leia costume, Aladdin wearing the vest and toting the blast of Han Solo, and a teddy bear that’s clearly supposed to be a cross between Chewbacca and Abu. The costumes ended up coming out really well.

The Jon Snow cosplay in this image is pretty impressive (he looks exactly like Kit Harrington too), but that’s not the real focus of this image. Most women that would want to do a genderbent Gandalf probably wouldn’t keep the beard. But that’s what makes this one all the more interesting.

It doesn’t appear as though she’s trying to dress a a particular Sith Lord (die hard Star Wars fans can take a guess), but the Sith Lord costume here is still absolutely stellar. The costume looks incredibly convincing and the deep cut Sith Holocron is a nice touch.

It’s strange how people take some of the cutest creatures in popular media, then decide to make them incredibly sexy. Most people probably don’t think to dress up like this when cosplaying Pikachu. Then again, this can’t be that much different from dressing up as a sexy cat. The main difference is that Pikachu aren’t real.

Mandalorians have gotten a lot more notoriety in mainstream media following the success of The Mandalorian tv series. The fun thing about Mandalorians is that they all wear different armors based on their clan. So you can customize your armor to look any way you want it to. Like these two women here.

Comic book characters are pretty common cosplay options at conventions. Catwoman is no exception to this rule. This one is specifically the Catwoman that appears in the Arkham series of video games. And the makeup combined with the actual costume looks like it ripped straight from the actual game.

Wookies are supposed to have brown fur. But that’s what really makes these costumes pop. The iconic Star Wars species reimagined as these colorful guys. They probably still get just as hot as anyone dressed as a normal Wookie though

With the release of Arcane, more people have probably become familiar with League of Legends characters. The costume, died haired, and temporary tattoos were impressive enough. But they even had Jinx’s iconic weapons made as well. It really shows her dedication to the costume.

She looks a little taller than the average Ewok. Also she looks like she has less hair. The teddy bear-like species from Return of the Jedi have been considered cute for decades. Wanted to do a cosplay of them makes sense, but it might be inaccessible for some considering their height. Although, going the more tribal route isn’t a bad idea either.

From this photo you can’t see the rest of the costume, but this is undoubtedly Elvira. The nails, the make-up, and the hair are ridiculously on point. She looks like the Cassandra Peterson, herself, the actress who played the Mistress of the Dark.

Are they cosplaying a Toy Story character? Might just be the toy itself. Either way, this costume’s so good it wouldn’t be hard to mistake this for a statue. They even have a foot stand. How do they move around with that thing on their feet?

This quartet did an awesome job with their Powerpuff Girls (and Princess cosplays). Some might think the tattoos of the women might ruin it, but it really just gives the impression that they’re older, which is certainly what they were going for. The prop of the mayor’s hotline is particularly noteworthy. It’s basically a one-to-one recreation of the phone.

They’re not dressed up as anyone in particular, but the makeup and costumes certainly do the trick of what they were going for. They look like characters in an old movie. They even got contacts to help sell the act. They have more of a yellowish color, but they still give the impression that these people aren’t real.

Here we’ve got another genderbent character, this one being Star Wars Sith Lord Darth Maul. While the general change in clothing is interesting by itself, the addition of the hood is an especially nice touch. Especially since it was made so that her horns poke through the top. And let’s not forget how much time it must have taken putting on all that body paint.

Genderbending is one thing, but looks like this woman wanted to turn the Winter Soldier into a Playboy bunny. The change isn’t exactly bad or unwanted, but it’s intriguing nonetheless.

The Red Riding Hood costume isn’t much to write home about, but, to be fair, there wouldn’t be much to that costume in the first place. The funny part is the dressed up husky by his side. If you don’t get a description of the cosplay, it might take you a few seconds to realize that’s supposed to be the wolf dressed as the grandmother.

This one’s more of a pun than a cosplay. Although it is pretty funny. Two bags of ice and a baby. If you can’t get that one, then you probably just don’t know who Vanilla Ice is.

Children Of The Forest

The Children of the Forest from Game of Thrones have an interesting look that’s hard to pull off. That’s what makes this trio all the more impressive. The make-up, prosthetics, and costumes are completely on point. And they did it all themselves as opposed to having an entire department on their side.

This isn’t the most accurate Hawkgirl cosplay, but they were probably going for their own thing with it anyway. Of course, it’s not the clothes that make this impressive, it’s the wings! Even people that wear wings in their cosplays ordinarily can’t get them to unfurl like that. Hopefully they can retract them too. Otherwise it’ll be a bit difficult to walk around and not hit anybody.

This little girl did an excellent job with her Wonder Woman cosplay. It’s not exactly correct, but it’s still good. Although, the best part is probably the invisible jet made from plastic.

It’s probably not that hard to get your hands on an Indiana Jones costume. Not to say that this one isn’t good. What really makes the cosplay great is the boulder cosplay following him. He’s even got the golden idol from Raiders of the Lost Ark as he’s running.

Yeah, this one’s more of a pun than anything. And it’s a pretty good one. They’re certainly representing a lot of spicy toppings here.

Is there a samurai Spider-Man in the comics? Maybe, it’s hard to tell, there are a lot of different universes. But that doesn’t take away from how amazing this cosplay looks. They even have the webbed areas on the arms and legs make up the armor plating. You can see for yourself how great this one is.