The Most Interesting Photos Taken On Nature Trails 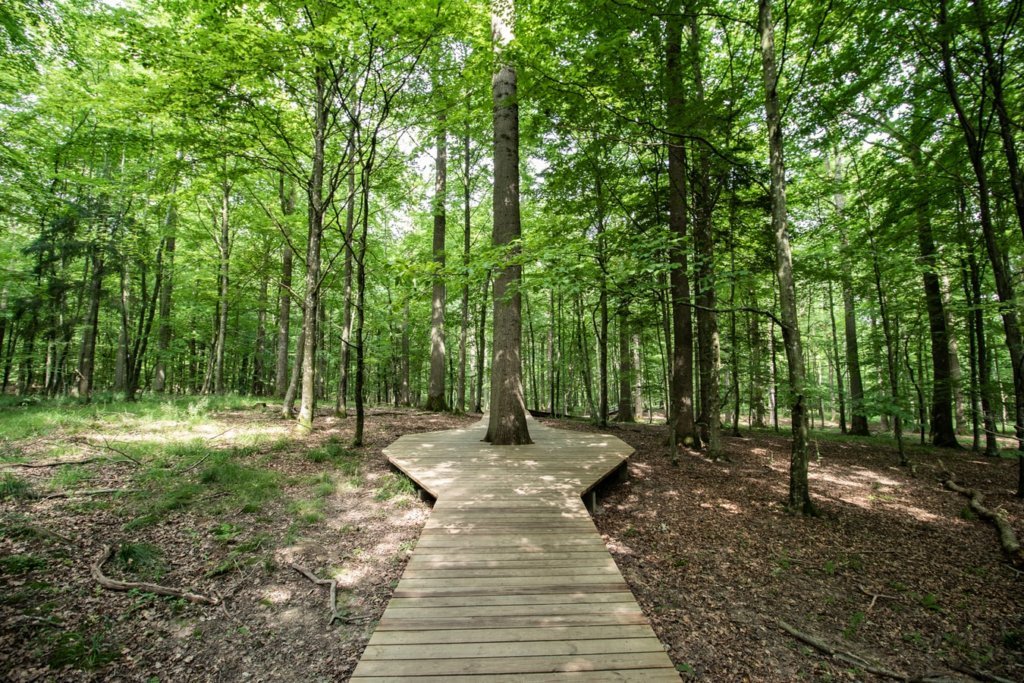 Nature can be an incredibly wonderful thing to look at and experience. Why else would people go on hikes and nature walks? Anyone that likes getting outside enjoys a good nature walk. Although, nature can also be scary, or just plain intriguing. These are some of the most interesting photos taken on a nature trail.

This man’s probably just walking through the woods with his dog. Although, the pose this man is in makes it appear as though he’s taking up a martial arts stance to ward off this dog.

The Cat And The Hound

Whether these two animals are looking at the camera or something offscreen isn’t clear. It is interesting that these animals are clearly not hostile towards one another, especially given the well-known feud between cats and dogs.

What Do You Call A Group Of Deer?

You call them a herd. You can also call them a bunch, mob, parcel, or rangale. No matter what you call them, it seems as though a lot of does wanted to gather in this spot, for whatever reason.

It’s easy to forget that the cute and cuddly otter is a stone-cold predator. They’re in the same family as animals like the honey badger and wolverine after all.

Out Of Your League

What exactly was the owl’s plan here? Is there something on the deer’s head we can’t see behind its ears? Maybe it’s just saying hi to a friend.

It’s not very clear how this car ended up here, but it’s obvious that this raccoon decided to move in. Now the raccoon’s eyes glow in the night as a fox approaches its humble abode.

What appears to be an ocelot or some other feline must’ve been tired. It must be especially brave to have just hopped onto the back of this massive Cape buffalo. And it appears as though the Cape buffalo isn’t particularly perturbed either. It’s very strong, so that makes sense.

This tiger’s definitely just covered in mud. Even when shaved, a tiger’s skin is striped. Even though tigers do enjoy swimming, it is curious how this one became so covered in mud.

The wolverine is also known as the skunk bear due to its colorization, size, and actual skunk-like odor it produces to mark its territory. Wolverines aren’t actually bears though, they are related to skunks. And they’re not related to people either, so it’s strange that this one is standing up.

What other reason would a bear have for attacking a Santa Claus decoration if not for a hatred of him. It only started on the ball on the hat, but it could have quickly escalated beyond that.

Probably not. Depending on where this image was taken, this is either a bear or a silverback gorilla. Although, both of those are far more dangerous than a theoretical bigfoot.

Something as common in the United States as deer are bound ot have plenty of funny photos. It appears as though this one caught a tumbleweed or a bush in its antlers. On the bright side, that gives it a gnarly-looking hairdo.

Looks like this deer lost its footing. Its friends don’t seem to care though.

Howling In The Night

Coyotes hunt mostly by themselves, but they do live in social groups. This looks like a family of coyotes having a good time howling towards the moon. Generally, loud howls are used for communication.

It seems as though this deer caught sight of the camera and thought it might be food. It just wanted to give it a quick lick before it was absolutely sure. Something about the tongue being just barely out makes this deer look particularly adorable.

Seems as though the wolves found the camera too. Although they might be more weary of it. The other two wolves probably sent the one with the darker fur to go check it out.

Looks like these two porcupines get along great! It’s easy to forget that some species can stand up on their hind legs, the porcupine being one of them.

The Deer Couple And Their Girl

In this late night image, it appears as though a little girl happened to run into a pair of deer. One’s a buck and one’s a doe, so it can almost look as though they adopted a human.

Marvel at the exceedingly rare albino gorilla…! Okay, it’s actually a guy in a suit. Seems as though they just wanted to pull a prank on the cameras.

It looks like something startled this deer. It’s understandable though. A creature with glowing eyes flying through the night is certainly scary.

Plenty of people have seen images or videos of bears scratching their backs on trees. Its not very common for bears to gather together to scratch their backs like this though. It actually looks like fun, although it’d be dangerous for any humans to show up.

Gathering By The Watering Hole

It appears as though all these animals were attracted by the same thing. A few sips of water and what appears to be some seeds are a good for raccoons, skunks, and that one deer that showed up.

These beautiful creatures are actually called bongos. They’re a unique species of antelope native to Africa. It appears as though they’ve just gathered around these bushes to have a meal.

There’s A Toll On The Food

Just behind this falcon you can see the carcass of some large animal. And on the top left part of the screen you can see another falcon’s legs as its trying to fly by. Seems as though this bird’s really greedy and wants all the meat to itself.

A Fox, A Possum, And A Rabbit Walk Into A Bar

It doesn’t matter if you’re predator or prey here. Whatever it was these three were looking for that led them here just wasn’t around. And now they leave, utterly disappointed.