The Highest Paid Female News Anchors In The Business 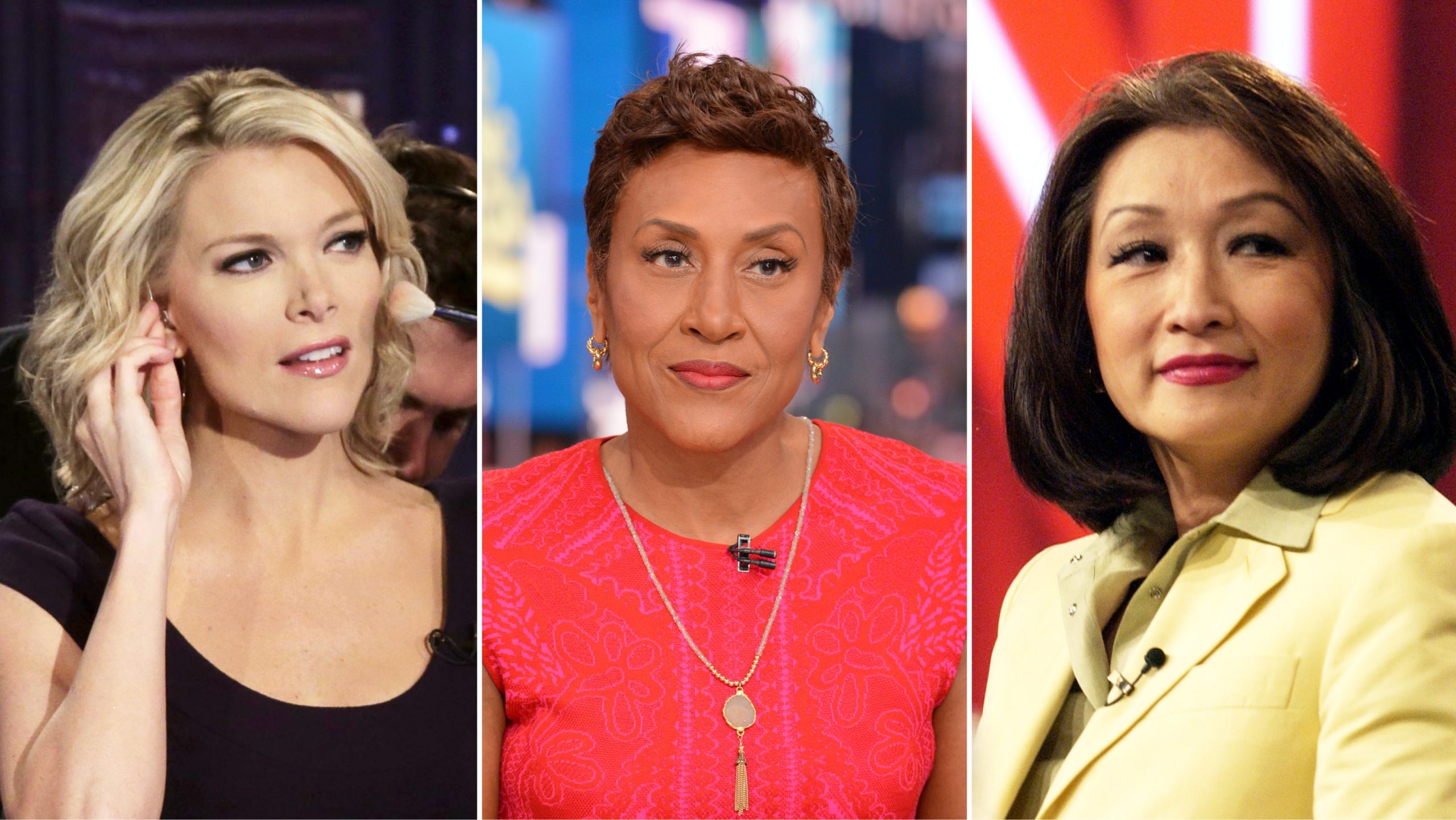 Talk shows, morning shows, news stations, we all get our daily news from there. And while there are a few memorable faces of men in the industry, there are just as many women, and they make quite the pretty penny. Here are some of the highest paid news anchors are that women.

After graduating from Clemson, Nancy O’Dell was a former beauty pageant contestant Miss South Carolina. Afterwards she started her broadcasting career in her hometown of Myrtle Beach. Serving as a reporter and anchorperson at the WDPE-TV news station, she gradually worked her way up the latter. She moved through local stations in Charleston and Miami before she was hired by Access Hollywood. Now, Nancy is a special correspondent for the show Entertainment Tonight.

Vargas is the anchor of ABC’s 20/20, a TV newsmagazine that airs most of ABC News’ specials. Previously she worked as an anchor on World News Tonight and got her start at WBBM-TV. The latter of these two was an affiliate of CBS in Chicago. Senior vice president of ABC, Phyllis McGrady called Vargas one of the most flexible talents he had ever worked with.

Burnett currently works on her self-titled show, Erin Burnett OutFront, on CNN. Additionally, she had co-anchored CNBC’s Squawk on the Street and Street Signs. And throughout the years she’s appeared on Meet the Press, Morning Joe, Today, and NBC Nightly News. Her work on documentaries has even made her a celebrity outside of the United States.

This news anchor came from Moldova to become a finance anchor at Yahoo!. However, after a drop in the financial services industry, she decided to pursue journalism in stead. Starting out as a producer on CNBC, she eventually became an on-air correspondent. In 2004 she was named one of the top journalists under 30 and was offered a correspondent position by ABC.

Abbys Huntsman started her career at the young age of 16, working behind the camera on Good Morning America. However, she hated the job so much she considered quitting the television industry. However, she got her big break when she got a gig hosting on MSNBC. A few years later she became a general assignment reporter for Fox News. Now she’s a co-host on Fox and Friends and ABC’s The View.

Meade is the lead news anchor for her self-titled show, the Morning Express with Robin Meade. She’s also a former Miss Ohio, starting her broadcasting career in her home state. She even won a regional Emmy after she joined HLN for her work. Something that’s helped with her career though is that she’s also a country musician, releasing two albums in 2011 and 2013 respectively.

Mithcell has been in the broadcasting industry for 50 years. Starting in 1967, she served as news director of WXPN, a student radio station. Later, she was hired as a reporter at KYW radio after graduating from college. Now she’s the New Chief of Foreign Affair Correspondent for NBC. And that’s just scratching the surface of everything she’s done.

Bartiromo is a famous TV journalist and magazine columnist, as well as an author. Currently, she hosts The Mornings with Maria and Wall Street Week with Maria Bartiromo. Fun fact, she is the first reporter to live broadcast from the New York Stock Exchange. Because of her programs and other accomplishments, she was even inducted into the Cable Hall of Fame.

Hoda started her career in 1998 on NBC-TV as a Dateline NBC correspondent. In 2008 she began hosting the fourth hour of The Today Show. In 2017 she was chosen to be the third co-anchor on the morning show Today. And after Matt Lauer was fired in 2018, Hoda helped to make history as the first ever all-female co-hosting team in the show’s history.

Currently the co-anchor on NBC New Today Show, Natalie Morales has appeared on many other NBC programs as well. In addition, she works as a weekend report at the WVIT-TV in Hartford. She’s popular for reporting compelling events, like the 2000 presidential election, Hurricane Floyd, and the Columbine shooting. She received an award for “Groundbreaking Latina in Media” from Catalina Magazine and was named one of the “Fifth Most Beautiful People” in 2007.

Ann Curry is a particularly popular TV personality, photojournalist, and news journalist. She’s been in the industry for over 30 years and has covered a lot of different subjects. From natural disasters, to wars, and human suffering, she’ll go anywhere to get the story. She even secured several exclusive interviews, including one with Iranian Foreign Minister, Javad Zarif.

Chelsea Handler’s career is a little bit different from the other journalists on this list. That’s mostly because she takes news and attempts to put a more comedic slant on reporting it. Her career began on E! Network where she had a self-titled late-night talk show that ran between 2007-2014. After a few other ventures that didn’t quite have the same level of success, Handler found herself on her own shown again, this time on TBS.

Courtney Friel works as a news anchor for KTLA-TV in California. Previous, she had covered entertainment news for KTTV or Fox 11 in LA, as well as working for the Fox News Channel. She hasn’t only been an anchor though, also posing for magazines like FHM and Maxim.

Mika Brzezinski has a somewhat impressive past, as well as a famous father. Zbigniew Brzezinski served as a presidential advisor to both Jimmy Carter and Lyndon B. Johnson. However, this is about Mika’s accomplishments. One of the most notable things she did was when she covered the attack at the World Trade Center in 2001 at ground zero. She was on MSNBC as an occasional anchor before becoming its official co-host. She’s also been the author of three books.

A British-Iranian journalist and TV host, Christiane Amanpour serves as the Chief International Correspondent for CNN. In addition to this, she hosts her own nightly interview Amanpour and is the Global Affairs Anchor for ABC News. She’s received over 30 awards for her reporting and was named as one of the “World’s 100 Most Powerful Women” by Forbes.

Megyn Kelly isn’t just a journalist, but a political commentator and corporate defense attorney. Initially she worked for Fox News, but has since joined the NBC News team. Her time with Fox and her popularity as a journalist led to her being named one of the “100 Most Influential People” in Time Magazine’s list in 2014.

A journalist, presenter, and philanthropist, Melissa Theuriau has quite the varied career. She’s worked for various news outlets, magazines, and launched organizations with other journalists. Her own organization is “La Rose”, which works with UNICEF to help provide education to underprivileged girls. In 2006 she was voted the world’s most beautiful news reporter.

Rachel Maddow’s been a particularly successful commentator and news anchor. She’s the first openly gay anchor and hosts her own, self-titled program. She got her start on radio, but made the transition to TV in 2005. She’s gained immense popularity over the years, both online and offline, as well as just as a fair number of detractors.

Kelly Ripa got her start in front of the camera, but not as a journalist. She started on the soap opera All My Children in 1998. In 2000 she made the transition to co-host on the show Live! With Kelly and Ryan. She’s been on other shows, both as an actress and show host, and has acquired quite the bit of wealth as a result.

Robin Roberts is one of the anchors on Good Morning America. Previously she also worked as a reporter on ESPN and was inducted into the Women’s Basketball Hall of Fame for her contributions to the sport through basketball. She was also the first to interview Barack Obama after he won the 2008 presidential election.

Greta Van Susteren has been a TV anchor and commentator on several networks, including Fox News, CNN, and NBC News. She hosted several self-titled programs and worked as a legal analyst on CNN.

Meredith Vieira is probably one of the most famous American journalists around right now. She was the original moderator of The View and co-hosted NBC’s morning news program from 2006 to 2011. She also worked as the the host on Who Wants To Be A Millionaire and was a contributor to Rock Center with Brian Williams and Dateline NBC. In 2014, she got her own self-titled program, The Meredith Vieira Show.

One of the most influential people in the broadcasting world, Katie Couric currently works as Yahoo’s global news anchor. She’s also worked for multiple news stations, including NBC, CBS, and ABC News. Some of the shows she’s been on include Today and CBS Evening News, as well as being a correspondent on 60 Minutes. In 2004 she was even inducted into the Television Hall of Fame.

Diane Sawyer is considered to be one of the most successful and influential female news anchors. She’s been in the business for over 50 years, starting in 1962. She’s had a lot of work on ABC in particular, including the flagship program ABC World News, ABC’s Primetime, and Good Morning America. And in 1984 she became the first female correspondent for 60 Minutes. Not only has she been a TV journalist, but she was also the White House staff member that wrote Richard Nixon’s speeches.

One of the most influential journalists, TV personalities, and authors in the US, it’s no surprise that she tops this list. She’s hosted ABC Evening News, 20/20, The View, and Today. Originally a writer and segment producer on The Today Show, she became more and more popular over time among her viewers. Currently, she’s retired, but she still reports to ABC News on occasion.