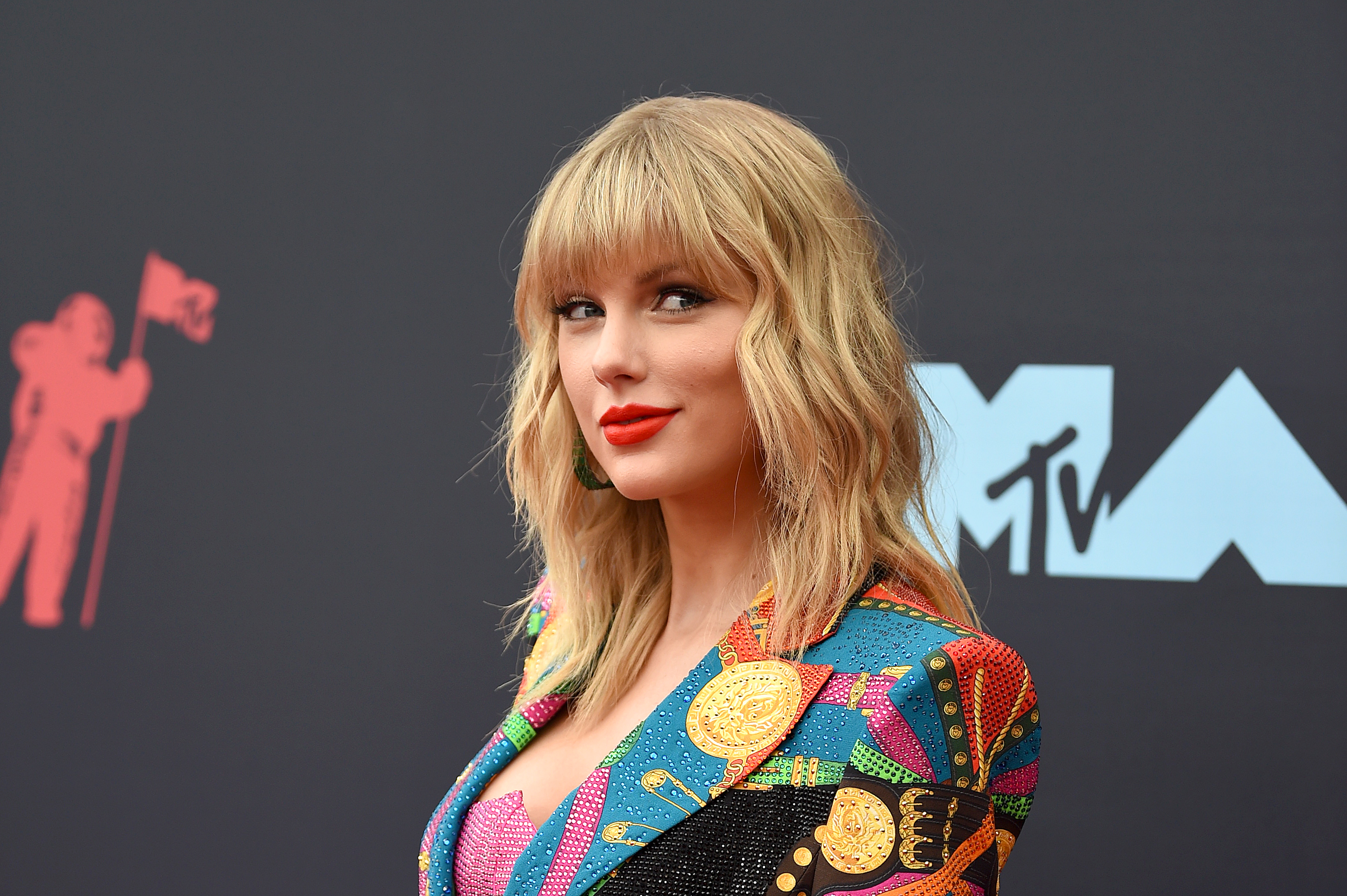 In the 13 years since she came on to the music scene, Taylor Swift has become one of the most profilic artists of all time. And it’s safe to say she’s undergone some pretty drastic transformations along the way. Now a politically outspoken pop star with a penchant for red lips and bold-colored outfits, Swift has come a long way from the curly-haired country singer she once was.

Over the years, fans have witnessed many iterations of the musician, from the fairytale-inspired dresses she wore as a young star to the crop tops and high heels she donned in the mid-2010s to the dark lipstick and snakeskin apparel of the “Reputation” era. Here’s a look back at her radical style evolution.

Taylor Swift looked every bit the country starlet for her first-ever Academy of Country Music awards show, which took place just weeks before she dropped her debut single, “Tim McGraw.” For the ceremony, Swift donned a printed handkerchief dress and, of course, cowboy boots — a staple piece in her wardrobe back then.

Swift maintained her curly ‘do for her appearance at the 2006 Country Music Association awards, but (temporarily) ditched her cowboy boots for a more formal look. Instead, she donned a long black, fishtail gown with matching black gloves.

Swift’s affinity for sparkly dresses was put on display at the 2007 CMT Music Awards, where she donned this short, glittery gown. The show also marked one of the singer’s earliest wins at an awards show. She took home the prize for Breakthrough Video of the Year for her first single, “Tim McGraw.”

Swift was back in her cowboy boots at the 2007 Academy of Country Music Awards, where she took the stage to sing one of her songs. For her performance, Swift paired the boots with another white beaded dress, this time with fringe at the bottom.

Swift went into full-on princess mode at her first-ever Grammy Awards show in 2008. The country singer walked the red carpet in this purple, full-skirted gown with floral embellishments. She completed the look with glittery eye makeup and some tight curls.

At her first Met Gala appearance, Swift looked sophisticated in this long, beaded gold and bronze ombre gown from Badgley Mischka. The metallic colors of the dress were appropriate for the theme of the evening: Superheroes: Fashion and Fantasy.

Swift’s fame rose to new heights with her second album, “Fearless.” So it’s no surprise her looks from the ensuing tour have become some of her most iconic. These beaded fringe dresses, usually paired with boots, were a signature part of the “Fearless” era.

Unbeknownst to Swift, the glittery, one-shoulder gown she wore to the MTV VMAs would end up bearing witness to one of the most infamous moments of her career. Though she took home the prize for Best Female Video for “You Belong With Me,” she also ended up getting dragged into a very bizarre, ongoing narrative with Kanye West. Swift later recreated this look — along with many other memorable ones — in her music video for “Look What You Made Me Do.”

Swift donned a more grown-up version of her favored glittery gowns to the 2010 Grammy Awards. It ended up being a big night for Swift, who took home a whopping four Grammys, including Album of the Year.

Swift surprised fans with her stick-straight ‘do and blunt bangs at the 2010 American Music Awards. She paired her new hair with a beaded minidress and dark eye makeup. Fun fact: Swift is currently the most awarded female artist in AMA history.

Back at the Grammys in 2012, Swift posed for pictures in a lovely, gold-sequined, high-necked gown from Zuhair Murad. She completed the softer, romantic look with an updo and subdued makeup. But that wasn’t the only gold Swift handled that night — she also went home with two more Grammys, both for the song “Mean.”

Swift seemed to be giving us a hint of what was to come with her 2012 look at the MTV VMAs. With a return of the straight hair and, most notably, the red lip, the singer was firmly ushering fans into the “Red” era. During the show, she performed the album’s first single, “We Are Never, Ever Getting Back Together.”

A month after releasing “Red,” Swift performed at the MTV European Music Awards. To take the stage, the singer dressed like a circus ringleader — an outfit that would become a signature part of the “Red” tour.

Swift traded her usual red lip for softer makeup and a loose, curled updo at the 2013 Grammy Awards. To go with her more ethereal vibes, she wore an airy, white Grecian-inspired dress. She also took home even more hardware, winning Best Song Written for Visual Media for “Safe and Sound,” a collaboration with the Civil Wars that appeared on the first “Hunger Games” soundtrack.

Swift didn’t take home any awards at the 2014 Grammys, but that doesn’t mean she didn’t shine. The singer literally sparkled in this metallic column dress from Gucci Première, which she compared to “a suit of armor” on the red carpet.

Swift was the epitome of old Hollywood glam at the 2014 Met Gala, bringing back her signature red lip and a soft, wavy ‘do. For the occasion, which paid tribute to legendary designer Charles James, she wore a pale pink Oscar de la Renta gown with a dramatic back and a long train.

Although the red lip stuck around, Swift went with a very different look at another red carpet just three months later. For her appearance at the 2014 MTV VMAs, Swift left behind the ultra-feminine dresses for this short, long-sleeved, alphabet-patterned romper and a shaggier, tousled hairstyle. The appearance came just days after she dropped her single, “Shake It Off,” leading up to her famed fifth album (and first fully pop record), “1989.”

The “1989” era was filled with bright jewel tones, cutouts and plenty of crop tops. Swift kicked off this phase with this green-blue Elie Saab dress at the 2015 Grammy Awards. The gown featured a high-low skirt and shoulder cutouts. She rounded out the outfit with matching earrings and ring and contrasting purple shoes.

Swift maintained a sleek, short bob at the 2015 Billboard Music Awards, which she wore alongside a plunging, white jumpsuit with side cutouts. It was a memorable night for the artist. In addition to premiering her “Bad Blood” music video at the show, she also added eight more prizes to her bounty of accolades.

Swift wore this shimmery, houndstooth crop top set to the 2015 VMAs. The singer rolled up to the awards show with the all-star cast of the “Bad Blood” music video, including Gigi Hadid, Martha Hunt, Lily Aldridge, Hailee Steinfeld and Mariska Hargitay. Her girl gang joined her on stage when she accepted the top prize of the night, Video of the Year.

Swift kept the crop tops coming during her 1989 world tour. This outfit, comprised of a bedazzled miniskirt and a black top with cutouts, was one of the standout looks of the tour.

Swift stuck with her signature red lip at the 2016 Grammys, although she switched up her hair with this shorter, blunt bob. She bared plenty of skin with this custom red bandeau top and high-slit fuschia skirt. The colorful outfit wasn’t Swift’s biggest moment of the night, though. She took home three Grammys, including Album of the Year.

Just a week after the Grammys, Swift returned to the red carpet for the Vanity Fair Oscar party. With her straight bob still intact, the singer looked sleek in this black, high-slit gown with a plunging neckline. She completed the look with gold accessories.

Swift showed off her edgy side at the 2016 Met Gala, which featured a “Manus x Machina: Fashion In An Age Of Technology” theme. The artist, who co-chaired the event alongside Anna Wintour and Idris Elba, fully committed to the theme, donning a metallic mini-dress with cutouts. Adding to the look: platinum blonde hair, dark lipstick and black lace-up heels.

After staying out of the spotlight for about a year, Swift resurfaced in August 2017 to introduce her sixth album, “Reputation.” And this time, she wasn’t messing around. Leaning fully into the brooding aesthetic of the record, the singer (literally) said goodbye to the old Taylor and adopted a darker look. New Taylor showed off her new sense of style at the 2017 Jingle Ball concert, where she donned snakeskin (a big theme of the “Reputation” era) and black shorts for her performance.

Swift brought her new vampirish vibes to the Reputation tour, donning dark lips and lots of glittery black costumes, including the one-sleeved bodysuit below. And in case you weren’t fully getting the message, she also brought a giant fake cobra on stage with her during most concerts.

Swift shone like a disco ball at the 2018 American Music Awards, with this shiny, long-sleeved mini-dress and matching thigh-high boots. It was another big night for the star. In addition to opening the show with her performance, she won four awards, including Artist of the Year. That brought her total to a whopping 23 awards, breaking the record for the most AMAs won by a woman.

As Swift began teasing her next album, “Lover,” she made yet another radical switch in style. She traded the crimson lipstick and shiny snakeskin for brighter hues. Having already filled her social media feed with pastel-colored imagery, she officially debuted the new look at the 2019 iHeartRadio Awards, wearing this technicolor sequin romper and butterfly-adorned heels.

Just days before dropping the first single from her new album, Swift attended the Time 100 Gala. For the occasion, she once again adopted a softer-hued outfit. She donned this pale pink and yellow gown with billowing sleeves, topped with a bejeweled floral headband and a heart ring.

In advance of her new single “Me!,” Swift surprised fans at a mural created by Kelsey Montague in Nashville, Tennessee. The star commissioned the butterfly mural to promote her new song, putting clues about her upcoming music in the piece. Swift’s outfit for the appearance — a light blue, embroidered crop top and matching skirt and pink-dyed tips in her hair — perfectly complemented the mural.

Swift continued to stick with the pastel theme at the 2019 Billboard Music Awards. To walk the red carpet, she wore this ruffled, lavender minidress with lace sleeves.

Shortly after dropping the single “Me!,” Swift opened the Billboard Music Awards with the song. For the first live performance of the new “Lover” era, the singer fully embraced the album’s candy-colored aesthetic. She wore this fringed, one-sleeved leotard, jeweled turquoise boots and — once again — dip-dyed pink hair.

Swift donned another rainbow-colored outfit at the 2019 iHeartRadio Wango Tango show. For her set, she wore a yellow shirt tucked into brightly colored, high-waisted shorts. With the performance taking place during Pride Month, Swift also took the opportunity to urge fans to sign her petition for Senate support of The Equality Act.

Though not quite rainbow, Swift did go quite colorful with her outfit for the 2019 MTV VMAs. The singer wore this bold rhinestoned Versace blazer dress with black, over-the-knee boots. Swift ended up taking home the Video of the Year award for “You Need to Calm Down.”

To take the stage at the VMAs, Swift changed into a gold bustier and sparkly royal blue shorts topped with a matching blazer. She didn’t completely ditch the pastels for her performance, though. To sing “Lover,” she brought out a light pink guitar with the name of the title track emblazoned on it in glittery letters. Clearly, the singer is enjoying a rosier phase these days.