Spot The Difference Pictures: How Many Can You Find? - The Delite Skip to content

Spot The Difference: How Many Can You Find? 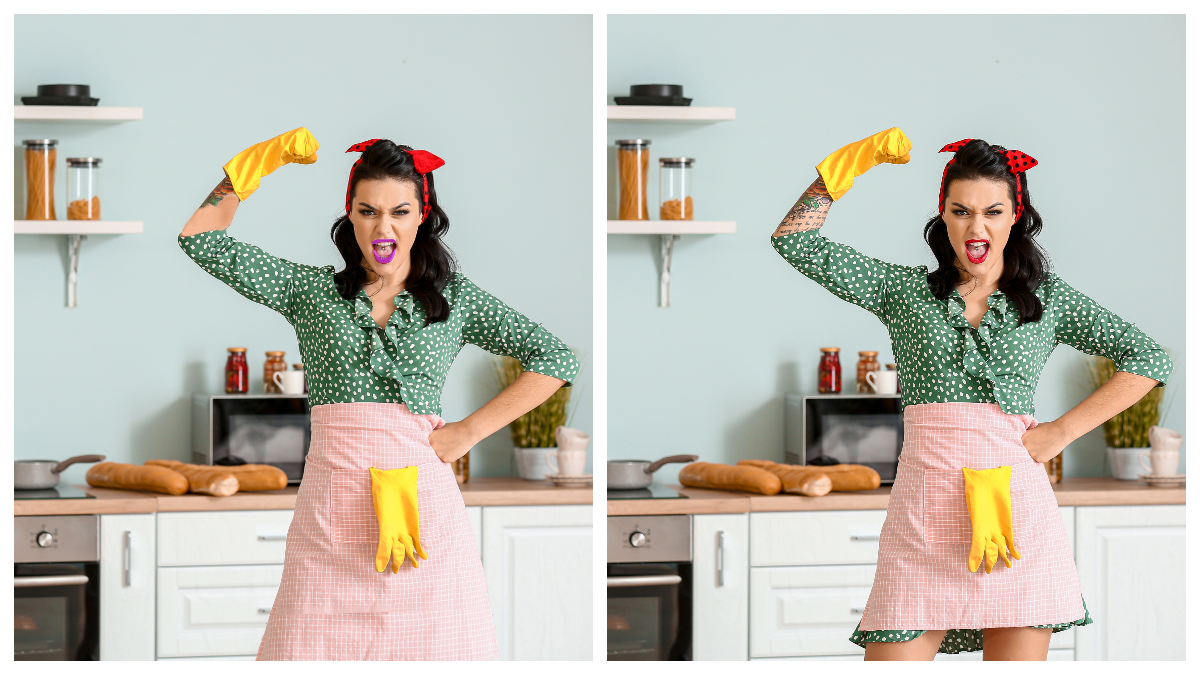 Who doesn’t love a good puzzle? We’ve created some picture puzzles that will test how observant you are as you try to spot the differences between two images that look nearly identical.

For each puzzle, there are five differences between the pair of pictures. See how many you can find and then go to the next slide to see them all revealed.

How many can you find?

A couple kids are making snowmen in this wintery scene. If you look closely, you’ll notice that not everything is quite the same between them. How many differences can you see?

1. The left kid’s hat is missing its top. 2. The left snowman has a new set of black buttons. 3. The middle snowman lost its bottom buttons. 4. The right snowman has an extra button at the bottom. 5. The house in the background had its roof cleaned off.

The home workspace is something many of us have gotten used to in 2020. This puzzle shows a pair of well-decorated offices that are just slightly different from one another. Again, there are five differences for you to find.

1. The chair had its connecting supports removed. 2. The lowest shelf has a new plant on it. 3. The picture on the desk was flipped upside down. 4. A new shelf was added to the wall on the right. 5. The cactus that was below the painting is now gone.

This animated bar scene is full of fun. The puzzle is also full of differences for the keen eye to spot. Be sure to look everywhere for the changes.

1. Four bottles were removed from the top shelf. 2. The bar stools had their footrests removed. 3. The painting was changed. 4. The man in green got a beer. 5. The bottle on top of the right shelf was taken away.

Wouldn’t we all like to have this kind of confidence when we step into the kitchen? This fierce woman is either doing some cooking or cleaning (it’s tough to tell with those gloves) and she’s got plenty of attitude either way. Can you spot all the changes between these two photos of her?

1. The items on the left part of the shelf were swapped from top to bottom. 2. Her text tattoo was removed. 3. Her apron was lengthened. 4. Her lipstick color was changed. 5. Her bow lost its polka dots.

This looks like a nice place to take a stroll. We’ve got walkers and riders enjoying a pleasant day in this puzzle. There are some tough-to-spot differences between the two shots.

1. Some clouds were added to the sky. 2. The top of the chimney was trimmed. 3. The bicycle was removed. 4. The lines on the street were taken off. 5. The circle in the middle of the roundabout was removed.

This little girl is hard at work making her dollhouse look perfect. We put some effort into creating some sneaky differences between the two shots. Can you find all five?

1. The paint on her cheek was erased. 2. Some paint was added to her foot. 3. The runny blue paint on the left can was cleaned up. 4. More notches were added to the front of the house. 5. The bottom panes on the lower side window were removed.

Here we have a living room that looks quite comfy with nice couch, a great view and a cute dog. What’s not to love? There are technically seven differences to find in this puzzle.

1./2. The two paintings were swapped. 3. The left curtain lost its hooks. 4./5. The curtain tiebacks changed colors. 6. The flower pot changed color. 7. The drawer on the coffee table was removed.

Remember the good old days when we could go to places like pool halls and have fun together? These three people are enjoying a game of eight ball. Can you spot the five differences and win our friendly game?

This picture doesn’t bring back fond memories for many of us. Although, if all math teachers had as much fun as this guy, maybe we’d love the subject a lot more. Find all the differences and you’ll get an A+.

1. The teacher got a tie. 2. His belt lost its buckle and notches. 3. His apple was removed. 4. An equation was added to the board, under his arm. 5. One of the equations on the right side of the board was erased.

These three women are having a good day at the skate park. While helmets would be advised, they look like they know what they’re doing. Finding all five differences might be tricky.

1. The left woman got some bold blue lipstick. 2. The left woman’s sock lost its stripes. 3. The middle woman’s ankle tattoo was changed to a heart. 4. The right woman lost her hat. 5. A palm tree was added.

I don’t know about you, but I’d love to have this much open space in my kitchen. We’ve done a few things to the room to make its decor a little different in the second image. See if you can find all five changes.

1. The bowl on the top shelf was removed. 2. The fixture from the bottom left drawer was removed. 3. The rug was extended. 4. The box in the far right cabinet was removed. 5. A planter was added to the right side of the counter.

Our invitation to this birthday bash must’ve gotten lost in the mail. We’ve got a group of kids and a mountain of sweets. What could go wrong? Try to find all five differences and maybe they’ll give you a slice of cake.

Kudos to these two bikers for wearing helmets! This couple seems to be out on a nice ride at sunset. Can you spot all five differences between the two pictures of them?

1. The reflector was removed from the front wheel. 2. The mirror was taken off. 3. A Victory Motorcycles logo was added to the bike. 4. The woman’s arm tattoo was changed. 5. The designs on her belt were removed.

We’ve got a space full of colorful toys on display in this puzzle. There are dozens of playthings in the pictures and five differences between the two images. Can you find them all?

Some people are gathered for a serious game of cards in this puzzle. The stakes are high for you to try and find all five differences between the two shots. Care to go all-in?