Some Of The Most Paused Movie Scenes Ever 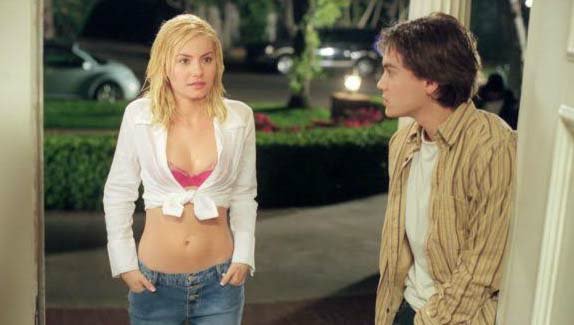 For one reason or another, everyone pauses movie scenes. And while the most common reason is probably that you need to go to the bathroom, there are also plenty of other reasons. Sometimes there’s just something on screen you really don’t want to miss. Here are some of those most famous scenes.

This was one of Sharon Stone’s most famous roles. Even people that haven’t watched the movie know about her role in it. Or more accurately, they know about one scene. And that scene is when she uncrosses her legs during a police interrogation. For a split second you can see, under her short dress, that she’s not wearing underwear.

The Cabin In The Woods

In The Cabin in the Woods, a group of college students take a trip to the titular cabin. As it turns out, anything they would touch in the cabin would lead to some kind of creature coming to kill them. While they end up being attacked by a zombie family, at one point you can see a whiteboard of all the different creatures that could’ve attacked instead. A few of the crazier options included a dragon bat, a merman, sexy witch, Kevin, and an angry molesting tree.

The Wolf Of Wall Street

The Wolf of Wall Street has plenty of moments to pause and absorb. And a lot of them focus on Margot Robbie. This movie really helped catapult her to superstardom. It just so happened that it had to deal with her showing off her naked body several times throughout the film.

Whether it’s the original 1990 version or the 2012 remake, both versions of Total Recall have one thing in common. And that’s a three-breasted woman appearing in the movie.

At the beginning of the second Captain America film, Steve Rogers is stated to be making a list of different things to catch up on. After all, he had been frozen for decades. Well, you can actually see that list while he’s writing down a recommendation from Sam Wilson. You can check out all the major media and historical milestones he’s written down. The list also changes in every country.

Tron was an interesting and landmark science fiction film of its era. With the film based off of computers and video games, there were bound to be some easter eggs in the movie. And one of those happens to be a game of Pac-Man visible on a map in the film.

Love And Other Drugs

Love and Other Drugs is another film with a lot of moments you can pause. There’s plenty of nude scenes of Anne Hathaway and Jake Gyllenhaal to keep any watcher entertained. Or in this case, pausing the movie.

At the end of the film Teen Wolf, there’s a scene where everyone’s celebrating at the end of a basketball game. And this is when you can a certain individual at the back of the bleachers. As it turns out, somebody left their fly undone.

For some time, this one was considered just a dumb theory, but it’s actually true, at least in some respects. After Simba sees his father, Mufasa, in the stars, his body begins to dissipate. And the stars briefly read as “SEX”. The actual intent was for it to say “SFX”, and it does for most of the time it’s visible. There’s just a brief moment where the “F” looks like an “E”.

Steven Spielberg and George Lucas have been friends for years, so them putting easter eggs of each other’s works isn’t too surprising. In The Phantom Menace you can some members of ET’s species in the Galactic Senate.

This is one of the most “blink and you’ll miss it” scenes in all of cinema. As the titular Rescuers are flying through the city, you see a brief flash of an actual photo in one of the windows. The photo is of a naked woman. In later re-releases, the photo was removed. The animators just slipped it in because it was much harder to notice back when the film was made.

This one’s based more so off of a theory than an actual fact. As Dorothy, the Scarecrow, and the Tin Man are walking down the Yellow Brick Road people pause this scene to get a glimpse of something. That black spot near the back of the set, people thought it was a Munchkin that hung themselves.

At the beginning of Zootopia when Judy Hops goes to the city of the same name, she plays the movie’s theme song on her iPod. You can briefly see the names of several song parodies of different Disney films.

In Batman v. Superman, there’s a notable scene of the brooding Bruce Wayne taking a shower. And during that scene you can see Ben Affleck’s butt. It’s really worth pausing to get an eyeful for a moment.

This is another scene featuring male nudity. At this point in Far and Away, you can see a young Tom Cruise resting on bed. He’s also completely naked with only a bowl covering his privates.

Three And A Baby

If you’re unfamiliar with this film, you don’t have to be to find this part that shocking. As it turns out, that person in the background wasn’t supposed to be in this scene. And isn’t exactly acknowledged either. It’s actually a cardboard cutout of Tom Selleck. Not anything creepy, but this led to theories of a ghost boy on set.

Mega Fox portrays an angelic being in Passion Play. The movie reminds people why the general masses find her so attractive. She spends quite a bit of the film topless after all.

Amanda Bynes appeared in quite a few more raunchy films in her earlier years as an actress. One of those films was She’s the Man. And in that film, there’s a part where she lifts up her shirt to flash an athlete.

As such a famous movie, people are probably familiar with this scene. Namely, that scene where Jenny’s playing guitar, in public, while butt naked.

This one was actually surprising, even to fans of the book. A kiss was called for between the fake Harry and Hermione. However, people were surprised by the pair appearing nude as they kissed each other passionately.

Oh the mistake the animators made here. Peter Pan is a mostly innocent film, but there was one mistake with making Peter’s shadow in this scene. Doesn’t it look a little inappropriate here?

People often pause this scene at the end of Psycho because of image people think is superimposed over Norman Bates’ face at the end of the film. As Bates smiles, it looks like a skull is appearing over his face. But no one’s ever been able to figure it out for sure.

This is a blink and you’ll miss moment in the first Iron Man film. As it turns out, you can see a damaged version of Captain America’s shield. In the sequel, they make this gag a lot more obvious though.

Spoiler alert! At multiple points throughout the movie, there are quick flashes that people try to pause the movie during. And during those flashes, you see Tyler Durdan, a figment of the narrator’s imagination, appear.