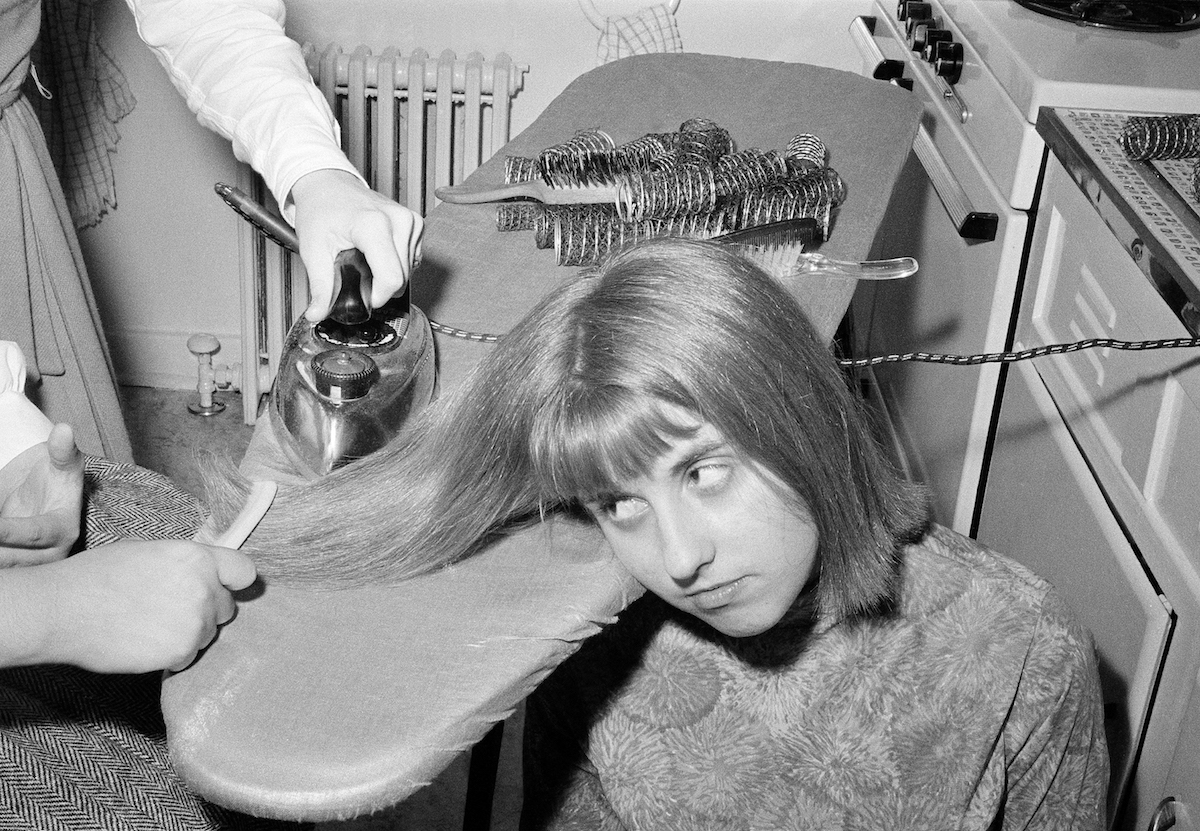 It’s nice to take a trip down memory lane and remember the good ol’ days. Many people who grew up in the 1950s and 1960s look back with fondness, sharing stories of a simpler, less stressful time.

But sometimes it’s good to take off those rose-tinted glasses and remind ourselves of the things we’re more than happy to leave behind. From the weird and wonderful (celery-flavored Jell-O, anyone?) to the downright dangerous, here are popular habits from days gone by that we just wouldn’t try today.

Paint Our House With Lead Paint

Paint containing lead was banned in the United States in 1978 when people finally realized that it probably wasn’t a good idea to inhale a highly toxic substance that can enter the bloodstream. But in the 1950s and 1960s, you were highly likely to live in a home with lead paint. In fact, the Environmental Protection Agency says 69 percent of homes built between 1940 and 1959 contained lead-based paint.

Expose Our Kids To Explosive Chemicals

The Gilbert chemistry set was designed to encourage budding young scientists — but this was no harmless toy. It contained highly volatile and potentially lethal chemicals, like ammonium nitrate and sodium cyanide. If parents had known chemistry kits could poison their children or blow their home to bits, they might have chosen different birthday gifts. Today, we have less dangerous ways to introduce our children to science concepts.

Asbestos, a natural mineral composed of thin fibers, was used in the construction of many homes before the 1980s — in cement, roof shingles, steam pipes, ceiling and floor tiles, textured paint or spray-on insulation. Asbestos is toxic, and can be dangerous if the fibers become airborne and are inhaled. The U.S. banned spray-on asbestos in the late 1970s.

Everyone knows Jell-O goes well with fruit and ice cream, but back in the 1950s cooks loved to pair the instant gelatin with a range of savory foods. The result was spectacular molded salads using veggies, hard-cooked eggs or even meats. Even the creators of Jell-O were on board the savory train, introducing Celery, Italian Salad, Mixed Vegetable and Seasoned Tomato flavors.

The 1960s might have given the world such sartorial gifts as the miniskirt and the bob haircut, but some of the decade’s fashion is best forgotten. In 1966, the Scott Paper Company created something a little different than the bathroom tissue it was known for. Fortunately, the paper dress was little more than a passing fad — by 1968 everyone had learned how impractical it was.

Anyone who was young and carefree in the 1950s or 1960s probably has a hitchhiking tale to tell. But thanks to increasing car ownership and the heyday of horror movies, along with discouragement from authorities, thumbing a ride from the side of the road has lost most of its romantic appeal. Nobody wants to get in a car with a serial killer, right?

In the 1960s, getting a tan was the goal. And protecting the skin from the harmful effects of UV rays was … well, not so much of a priority. In fact, any lotion sun-worshippers applied was likely to be a tan enhancer. These days, the dangers of too much sun exposure are well known, and there’s no excuse for going to the beach without SPF.

Why make a peanut butter and jelly sandwich when you can enjoy the delights of jellygrill? This 1960s delicacy consisted of a large helping of grape jelly and processed cheese of your choice (such as Kraft’s Velveeta) between two slices of bread. If you think it sounds awful, you’re not the only one, which is why the jellygrill didn’t last.

It’s hard to believe people used to light up a cigarette on flights, but in the 1960s it was normal to recline your plane seat into a cloud of smoke. By the end of 1990, smoking was prohibited on all domestic flights under six hours in duration. If you’ve noticed a tiny ashtray on the wall next to the lavatory door on a plane, that’s because it’s still a legal requirement. If someone decides to break the law, they need somewhere safe to stub their cig out.

Drink Wine With Every Meal

White wine with breakfast, lunch and dinner? It doesn’t sound like the healthiest eating plan, but it was all the rage, thanks to a book by Helen Gurley Brown, “Sex and the Single Girl,” published in 1962. Gurley Brown’s egg, steak and wine crash diet, which saw a resurgence in the 1970s thanks to a reappearance in Vogue, definitely wouldn’t get the backing of a registered dietitian today.

Big hair was in vogue in the 1960s. Its revival was partly due to Jackie Kennedy, who rocked a bouffant like nobody else. FYI, the bouffant is defined by the Oxford Dictionary as hair “styled so as to stand out from the head in a rounded shape,” from the French word for “swelling.”

Twist Away Our Waists

If the egg, steak and wine diet didn’t whittle away those inches, women in the 1960s might have turned to the Trim Twist. It was a simple device: a single, rotating board that you stood on, then started twisting. Unfortunately, it didn’t work.

Coffee is one of the most popular hot beverages around the world, and in the 1960s, there was no lower age limit on this caffeinated refreshment. That’s right — even infants could enjoy a cup of joe first thing in the morning. It’s what Dr. Walter Sackett recommended in his 1962 book “Bringing Up Babies.” Dr. Sackett claimed that kids should be given black coffee starting at the age of six months, with the reasoning that they needed to be introduced early to family habits. To be fair, we don’t think all that many parents followed his advice.

We know a lot more about the health risks of smoking than we did in the 1950s, and smoking rates in the U.S. have massively declined. If you smoke during pregnancy, you’re likely doing so knowing full well what all the risks are. But expectant moms of decades ago had an excuse — they were regularly told it was okay to light up during pregnancy. In fact, a 1966 book by Laury Oaks, “Smoking and Pregnancy: The Politics of Fetal Protection,” said it was absolutely fine to have up to 10 cigarettes a day while growing a baby.

Bottled water was first commercially available in the U.S. in 1767, but its popularity declined in the early 20th century and it wasn’t revived until the 1970s when Perrier launched a successful ad campaign. Many thirsty kids in the 1950s and 1960s relied on the hose to stay hydrated while playing outside. Unfortunately, the water coming through hoses wasn’t regulated like water in the home was, and may have contained unsafe levels of lead. Good news for Perrier, then.

In the U.S., new cars weren’t fitted with seat belts until the 1960s, and it wasn’t a legal requirement to use them until the 1980s. According to the Department of Transportation, seat belt use reduces serious crash-related injuries and deaths by about 50 percent. There’s no denying that buckling up is the single most effective way to protect yourself when traveling on the road (and many modern cars will alert you to the fact that you haven’t, so there’s no excuse).

There’s nothing like a tall glass of fresh orange juice. Frozen or powdered stuff just doesn’t hold the same appeal. But back in the 1960s, orange drinks came in different forms because orange juice starts to degrade as soon as it leaves the farm. A spoonful of powder in a glass of water turned into an orange-flavored drink (think Tang). You could also get orange juice as a frozen concentrated product that needed to be mixed with water, a form that dominated the industry for several decades. Orange juice back then was not as we know it today, and is probably best kept in the past.

There’s no denying that the idea of eating ice cream for breakfast has a certain forbidden appeal. But in the 1960s, people put ice cream on their Cream of Wheat (a porridge-like breakfast staple made of cracked wheat that’s still available today). Ice cream and porridge? We’ll pass, thanks.

Not to be confused with legal drag racing, street racing is an illegal form of racing cars on a public road. In the U.S., the roots of modern street racing go back to Michigan in the 1960s, when the three main Detroit-based American car companies (Ford, General Motors and Fiat Chrysler, a.k.a. “The Big Three”) were producing high-powered performance cars. Because a private racing venue wasn’t always available, drivers used public roads to show off their speeds. Street racing still happens today, but it’s much more difficult to organize an illegal and extremely dangerous road race.

Long before hair straighteners and flat irons became widely available, women had to resort to somewhat unusual (some might say desperate) measures to achieve straight, sleek locks. The 1960s was not a decade that embraced curls, so the electric clothes iron became every fashionista’s best accessory. All you had to do was lay your tresses down on an ironing board and get your mom or friend to go over them with the iron. Can you smell the singed hair?

Get A Lobotomy For Mental Health Issues

In 1949, Portuguese neurologist Egas Moniz won the Nobel Prize for inventing lobotomy, a surgical procedure that was later described by one psychiatrist as “putting in a brain needle and stirring the works.” It involved severing the brain’s connection to the prefrontal cortex and was believed to “cure” mental illness. If it sounds horrific, that’s because it was — many patients ended up a lot more ill than they were before having the surgery. Luckily, we have many other treatment options available today.

Ride A Bike Without A Helmet

In the 1950s and 1960s, it was rare to see someone riding a bike with any sort of protective clothing or helmet — even in dangerous races like the Tour de France, as shown below in 1952. Nowadays, while there’s still no federal law in the U.S. requiring bike helmet use, most states and localities started adopting laws in the 1980s – although most of them are limited to the under 18s. Some cyclists still don’t like wearing a helmet, but the message is clear: every bike ride should begin with putting on a helmet, says the National Highway Traffic Safety Administration.