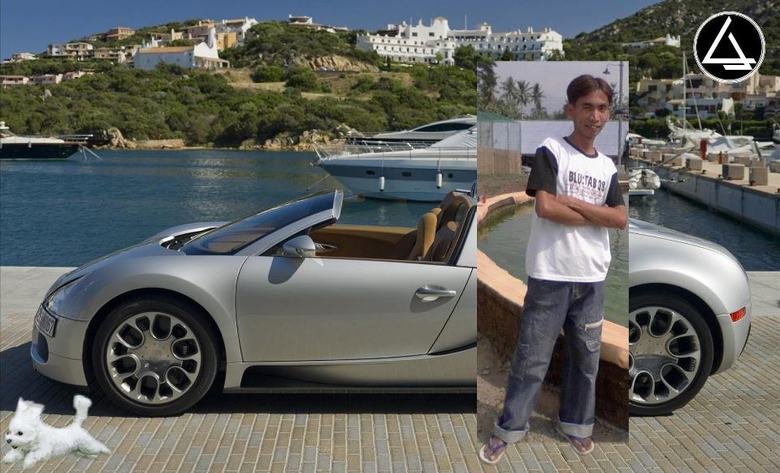 Photoshop isn’t inherently bad. Sometimes you can touch up a photo, get rid of small imperfections, just save you time so you don’t have to take a new one. But sometimes people go way too far when it comes to photoshop. That’s how you end up with photos that don’t even look like real people. Or sometimes you fail so spectacularly it’s easy to figure out that it’s doctored. Here are some examples of those photos that make people doubt that the pictures you see on Instagram are even based in reality.

Even with a side-to-side comparison, you’d probably be shocked to learn that these are the same person. Yes, the woman had herself digitally de-aged to look more attractive. That means someone must have not been telling her how beautiful she was, because she looked stunning in the first image. She had her face and chest smoothed out, but that ends up having her look more like a doll than a real person.

People give respect to their servicemen. They help protect their country after all. But a closer look at this image and you can see that the head of this person is not the head of the actual subject. It’s a little hard to tell what’s real and what’s photoshopped exactly, but it’s clear that there’s some photoshopped falsehoods.

This is a pair of twins well-known for showing off their muscles on Instagram. And while they’re undoubtedly muscular, it’s definitely not raining here. Really? It’s raining so hard that their shirts are soaked through, but their hair is completely fine?

Do you know who this is? Really? You don’t? Well, this is Madonna. She’s currently 63 years old, so it may be clear to you that she doesn’t actually look like this now. She didn’t really even look like this when she was young. It’s a real hame she felt she needed to change herself so much in her photo. She’s still rather beautiful, even in the present.

These two photos were taken at two different times, but it’s pretty easy to see the differences here. She’s fairly toned and fit in the first image. But in the second, she tried way too hard to shave off some weight. Now she looks inhumanly thin. She looked so much healthier before.

So, the edit on the face here already looked pretty fake. It looked like someone took a magazine cover, cut out a model’s face, and stuck it on there. but the bars practically disappearing around where the face is what really seals the deal. Not unless this person’s face can melt metal.

Now, this man could potentially rock these clothes. Or otherwise even stand on this ledge. But we know it’s not him. This isn’t some kind of forced perspective making his head look so small after all. It was cut out and put on this body. Someone really should’ve double-checked this before sending it out.

This woman’s hips are very unrealistically wide, especially in proportion to her body. Although, one might not be able to tell this photo was photoshopped if it wasn’t for the window behind her. And that window shows the actual size of her hips.

So, did he try to make his arm look buffer or thinner? This guy’s already pretty muscular so it’s hard to see why he’d want to alter the photo in any way. It’s still very obvious because of the warped space in the background around his arm. He’s making waves in the water and on the sandy beach.

If you win the beauty pageant for Ms. Slovakia, you’d assume that means you’re attractive as you are, right? Well, this winner decided she still needed to put a filter on when taking this photo with her grandfather. It would look strange enough on its own, but then she didn’t put the same filter on her grandfather’s face. It really gives you a peak into the uncanny valley.

Reflections always seem to betray people that attempt photoshop. It looks like she added in eyeshadow and changed her lips for a closed-mouth smile. It’s a real shame she felt the need to do this, cause based on the reflection she was already pretty cute.

Are These The Same Person?

This Instagram influencer had been posting images for a long time. People thought she was gorgeous and those looks gained her quite the following. But she made an appearance on live television and she was unrecognizable. It’s not that she looked unattractive, but the number of differences nearly outweighed the similarities.

This is another example of why you shouldn’t try to smooth out lines on people’s faces. This is an older woman, but an attractive one. Getting rid of all the wrinkles on her face turned her from an attractive, older woman to an inhuman-looking doll.

Teeth whitening isn’t all that bad. It’s understandable why someone might want to do that. It’s just a touch up. But making them this white is not a good idea. Even people who have had their teeth whitened don’t have them shine this brightly. It’s the uncanny valley that makes them look inhuman. And the fact that they’re eating McDonald’s makes this photo even more ironic.

There really was nothing wrong with the first picture. Yet they decided to photoshop in some edits anyway. She thinned out her jaw, stomach, and arms. It really just makes her look more disproportionate if anything.

Comparing Yourself With Models

Taylor Swift is pictured here with some of her friends. And they’re all models. Models are often conventionally attractive, but almost everybody considers Taylor Swift to be attractive as well. That’s why it’s all the more disheartening she felt the need to alter the photo. You think that’s untrue? Look at the bar in the background they’re leaning on. It’s clearly warped.

It’s not very clear what changes were made to her thigh. Maybe something was shaved away. Point is, it gives her leg quite a weird shape. She looks almost impossibly flexible in this image.

Sticking A New Head On Their Body

Well, the original subject of this photo does have a rather muscular frame. But that’s obviously not their face. Not only does the skin tone not match, it’s clearly taken from a magazine or some other photo.

It’s hard to tell what part of this is actually real. It looks more like a painting than a photo. Whoever photoshopped this image clearly didn’t do a very good job.

The Kardashians are known to alter their photos a lot, or even just their actual bodies. They probably developed that habit from their mother. Kris Jenner once posted an image of herself with Gordon Ramsey, and all of their wrinkles were smoothed out. But everyone learned the truth when Ramsey, himself, posted an unaltered version of the same photo.

Man, this lady’s got some big guns. Too bad they aren’t real. Either that or the shadow of her arms was edited. Which one do you think is more likely?

He looks like he’s in pretty good shape. Too bad he didn’t think so. The number of pounds shaved off from his sides and stomach does not match up with his hips and chest. Seriously, why change yourself when everything you’ve got already fits together perfectly.

She almost looks like she’s wringing herself out in this one. The amount of weight taken from her stomach makes her look like she’s anorexic. Or at least she would look like that if she didn’t look in-shape everywhere else.

You know when you look at photos of someone and can tell when someone’s abs are clearly painted on. Yeah, that’s the kind of situation we’ve got going on here. What’s worse, showing off your natural belly or having people make fun of you for a bad photoshop job?

This woman’s physique was already perfect. It’s another case of it really being a shame she felt the need to photoshop out some of her weight. She may look thinner in the second picture, but how will people feel after seeing her in real life?