Pareidolia Experiences Captured In Photos - The Delite Skip to content 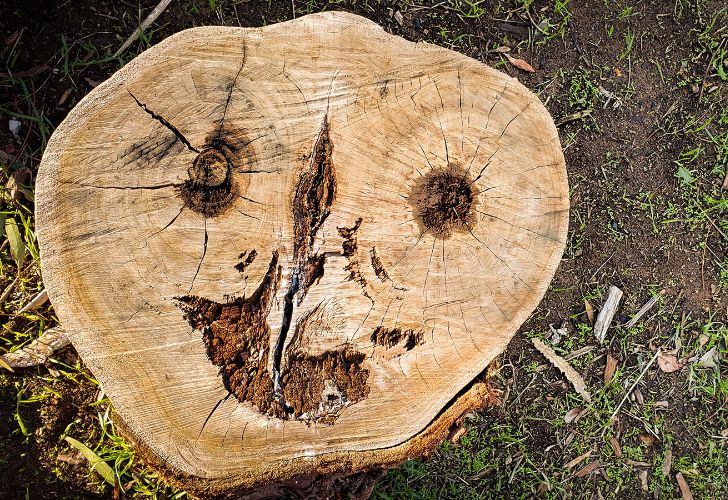 Pareidolia is the tendency to find meaning, faces, or patterns in everyday things. The most commonly seen way this happens is with the appearance of smiley faces. Of course, those smiley faces aren’t actually faces and just happen to be shaped in a certain way. But they can still be pretty amusing. Here are some of the most amusing examples of pareidolia experiences.

When you got shocked you always make a sort of “O” face. It’s curious to imagine what this building saw that made its face permanently look like this. It’s an old house so it’s certainly had the chance to see quite a few things. Like that fruit tree in the foreground having been planted. Or maybe it was just surprised by the fact that it realized its eyes were the heads of two statues.

They’re only a small flock, but they left quite the impression. Flying off into the sunset, they’re probably as happy to be together as the smiling face their formation made appears to be. Or maybe they actually just hate each other. After all, three’s a crowd.

Ribbit! Looks like a frog hopped into your coffee. Don’t worry, he’ll probably be gone in a few more sips. And frogs certainly aren’t the most dangerous animal you could put in your mouth. You’ll be fine. Unless that’s a cane toad. Never put a cane toad in your mouth.

The Face Of Chocolate Milk

When you drop gallon containers of milk they pretty likely to crumple like this. That is, if they don’t break. But this one looks a little but like an Easter Island head! Certainly an interesting face on their part. Just make sure to be careful with you milk and chocolate milk. Or else you might find yourself seeing faces in them forever.

It almost looks like a shocked alien from one of those CG animated movies. It looks like it wants to get up and start crawling around your house. But hey, that’s strollers for you. You don’t allows think about what the back of them look like anyway. Especially when folded up.

Those squinting eyes. That small mouth. This mop looks irrationally angry. And the yarn of the mop looks like they just have a series of blonde dreads. Maybe it’s angry about how bad its haircut is. Or maybe it’s just angry that it’s being used as a mop.

When you roll up magazines or other papers like this it really gives a certain impression when you place in the mouth of this mailbox. Or at least any other mailbox that looks like a blank face. He looks a little out of it too.

Orange You Ready To Dance?

This orange is truly ready to dance. They’ve got their hands up and look ready to sway those hips. Let’s just put on some music for them. What kind of dance to they do? They seem like they’re great at it.

It’s a hard face to explain. You know what that face is and what it represents, but you can’t put it into words. But, at the same time you still think it looks hilarious. They certainly look surprised.

At the bare minimum, someone didn’t get all the seeds out of this pepper. It looks like its got a gnarly maw of teeth. And it really doesn’t seem like a particularly kind host. It looks like it might try to take a bite out of you instead.

Poor potato looks so sad. Maybe if it got a quick wash before getting boiled it’d feel a little better. Something’s gotta help him feel better. Otherwise he just continues to look a little haunting. A bit more on the disturbing side.

This Onion Will Make You Cry

This onion’s smarmy face as you start to cut it. It knows what it’s doing, and it doesn’t care. It’s going to enjoy making you cry. And it’s not like you can stop until you’ve finished.

Those brown spots inside of bananas always seem to make faces. But normally they don’t seem so sad. They probably didn’t want to get cut up in the first place. Maybe they’ll look happier if you turn them upside down.

Eye closed with a smile on its face. This loaf of lemon raspberry bread has made peace with its situation. And it seems to actually be looking forward to it.

This one’s not so much a human face. More like a robot face. And it looks very happy to eat your sunglasses now that you’re in the car. This “Iron Giant” must certainly be hungry.

Sometimes when you can’t fit your boxes in your recycling bins you end up with these little gems. It looks a little happy actually, like it wanted to greet you. The flap on its left side even looks like it’s waving at you.

The Man In The Clouds

This cloud formation would probably look completely different if you were looking at it straight on. Fortunately, we’re looking at its profile. And it looks like Zeus, himself, has manifested before us!

Worn Out And Fed Up

It’s just a fact that the more you sit in chairs the more worn out they’ll get. And this one just looks tired of all the sitting. And a little miffed too. Next time you need a chair, don’t pick this one. They clearly won’t like it.

Dog In the Wood Grain

It seriously just looks like a chihuahua or beagle, or some other small dog like that. Just etched into the wood. It’s actually a little cute. You might even want to take this dog home with you. Until you realize that it can’t ever leave that spot.

The shape and structure of the apple does make it look like a baby face (or maybe a Cabbage Patch Kid). But the colorization of the “mouth” and “eyes” makes this look like a bit more of a demon than normal. The apple might have rotted a little.

Skull In The Parfait

Everybody loves parfait! At least until a dark omen like this appears in your desert. You might be having nightmares about this bloody skull after a little while. You might not like parfait anymore after this encounter.

Do you think Pinocchio’s life would’ve been a bit easier if his nose bent upwards after it grew out a certain length. Hopefully not, that puppet needed to learn a lesson regardless of how his nose grew. But this one still gave way to a funny image.

You must have done something really questionable for the light switches to looking at you like this. Their faces and head structure actually looks like they could be a Muppet.

Speaking of Muppets, what a coincidence! Putting in some pasta to get boiled. And then the bubbles help form this shape. Technically he’s not the Cookie Monster though. More like the Gnocchi Monster.

Cat In The Bag

Well, technically not in the bag. More like he is the bag. Plastic bags are so light and malleable, it’s pretty easy to get them stand up. But they don’t look like animals all that often.