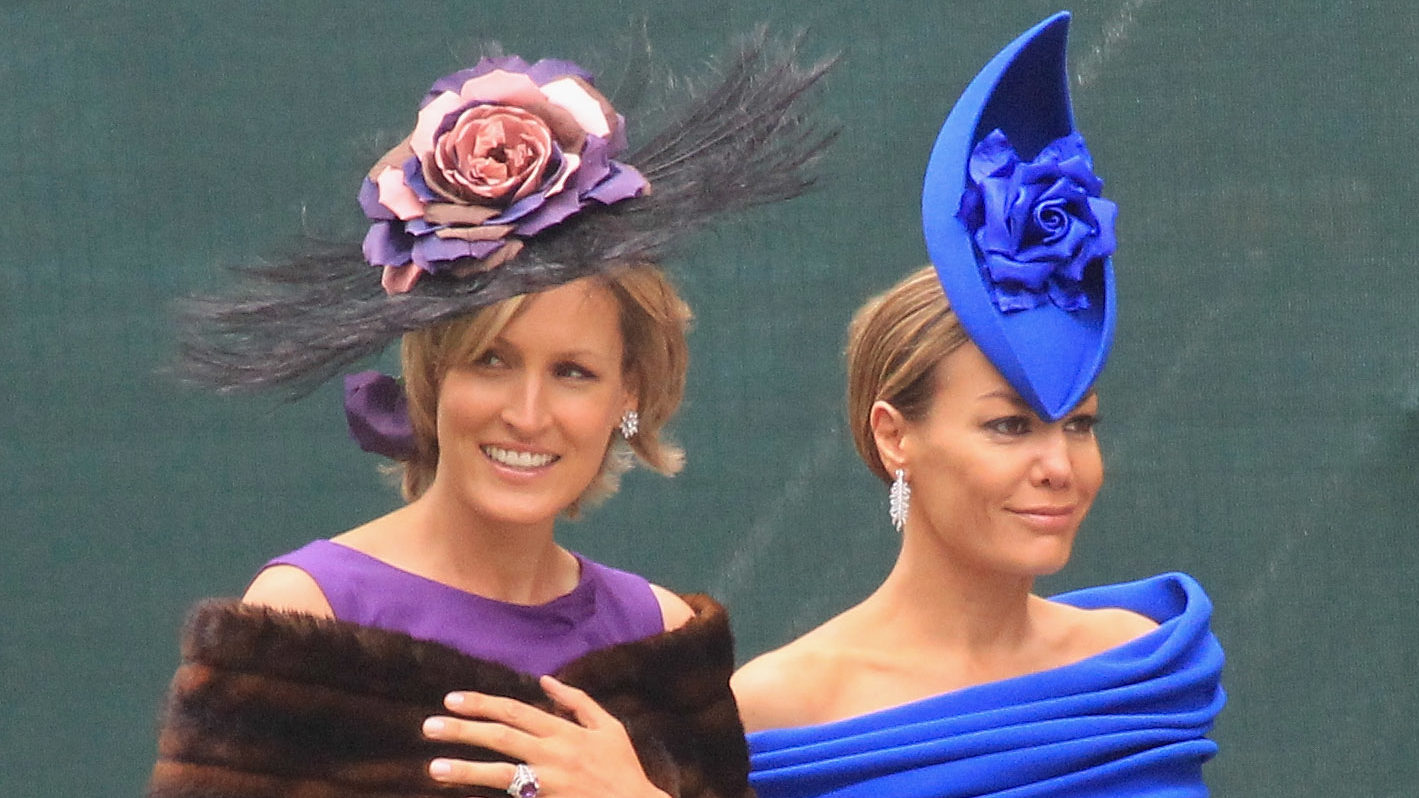 It’s not hard for royals to turn heads on an ordinary day, but when they step out for weddings and official events they pull out all the stops. Sometimes looks are chic and simple, but the hats are always striking and they always get us talking. They are even, quite often, literally over the top.

Over the years, the royal family and their friends have brought us many memorable moments in millinery. Hats off to everyone who dared to wear these outrageous toppers.

For Prince Andrew and Sarah Ferguson’s wedding in 1986, the Queen Mother and Queen Elizabeth looked like two peas in a pod. They coordinated their lavender ensembles right down to the accessories for the big day: purple hats and matching pearls.

Queen Elizabeth wore a fine feathered headpiece to Prince Edward’s 1999 wedding to Sophie Rhys-Jones. The soft spray of feathers frame her royal features. It perfectly coordinated with her purple ensemble.

Princess Margaret seems to have discovered a genius hack for waving to the public en route to the Royal Ascot in 1987 with the Duchess of York. She wore a sunny yellow hat with wavy fabric, so she can rest her hand. Her topper is as sweet as lemon meringue pie.

From a distance, Princess Anne’s blue fascinator looks subtle and simple. However, up close you can see the unique twisted shape that resembles a mini tornado. The spiral effect is truly spectacular.

The Duchess Of York swapped her tiara for a Davy Crockett-style hat on a trip to Canada in 1987. She spent time in the North West Territories and went canoeing. Her furry headband helped her blend right in with the wilderness.

Princess Margaret wore this pastel green topper to the Royal Ascot in 2009. It perfectly matches her pastel ensemble and features mixed textures for an extra wow factor. It includes netting, feathers and two separate tiers.

Good things come in threes. It’s hard to pick just one showstopper from this snap with Queen Elizabeth, Princess Margaret and the Duchess Of York attending Ascot. However, Princess Margaret’s red plumed, fluffy topper is a head above the rest.

The Princess of Wales stepped off the plane in Dubai in 1989 with an ultra-coordinated ensemble. Her Philip Somerville hat integrated a turban head wrap with a minimalist white brim. Her blue and white color scheme also matched her plane.

Though Kate Middleton’s wardrobe generally skews conservative, a few of her hats did make the cut. Middleton wore this Russian style cap for the Cheltenham Races in 2006. The oversized furry hat kept her cozy and warm.

The Duchess of Cambridge wore a pale peach hat to the wedding of Zara Phillips and Mike Tindall in 2011. The beautiful creation was a study in contrasts. One side is sleek and smooth, and the other is soft and floral.

Trooping Of The Turquoise

The Duchess of Cambridge has grown more daring in her millinery choices lately. For the 2018 Trooping of the Colour, she wore an asymmetrical pastel turquoise fascinator with fanciful fabric. Her celebratory choice matched the parade, which marks the official birthday of the Sovereign.

Meghan Markle donned her very first fascinator for Christmas Day church service in 2017. She wore a brown bespoke fascinator designed by Philip Treacy. Since then, she’s worn many more but this one still stands out thanks to its clean lines and copper hue.

For the opening day of Royal Ascot, the new Duchess of Cambridge wore a wide black-and-white hat by Philip Treacy. Over the years, the Royal Ascot horse races have brought out the best hats. In fact, women must wear hats that cover at least four inches of their head. It’s no surprise that Markle brought out one of her most exquisite toppers.

Princess Eugenie of York’s fascinator at Prince William and Kate Middleton’s Royal Wedding in 2011 was so bright it almost distracted from the main event. Her multicolored headpiece featured flowers, feathers and more. The vivid blue base coordinated with her equally bright dress.

Princess Beatrice’s fascinators are the stuff of royal legend. One of the most eye-catching was this butterfly-themed one. She wore it to the 2008 wedding of Peter Phillips to Autumn Kelly. The kaleidoscope of butterflies looks like they might take off from her head at any moment.

The Duchess of York and Princess Beatrice share a love of extravagant headwear. The mother-daughter duo cheered on the King Edward VII Stakes in headpieces that also deserve applause. It’s hard to see the detail in her mother’s, but you can’t miss the bright red spikes jutting out from Princess Beatrice’s hat.

Princess Beatrice wore a sculptural Philip Treacy hat to the royal wedding in 2011. It was such a showstopper it instantly spawned memes and its own parody Facebook account. Then, it went on to raise more than $131,000 for charity through an eBay auction.

Princess Eugenie and Princess Beatrice chose cheery creations to cheer on the horses at Royal Ascot in 2008. Eugenie’s skyscraper is a fitting royal purple. In contrast, Beatrice donned a white cap with a spray of black sculptural accents. Both closely resemble a fireworks show, and certainly received plenty of oohs and aahs.

Birds Of A Feather

Princess Beatrice and Princess Eugenie waved to crowds as they traveled to the annual Trooping The Colour ceremony at Horse Guards Parade in 2016. There’s no question people took notice along their route. Beatrice wore a striking orange cap, only subdued by its small stature, and Eugenie opted for an angular feather topped fascinator.

When Sarah Ferguson stepped out for her daughter Eugenie’s wedding, people could not stop talking about her green and gold hat. The sizable gold bow adorning it resembled wings, causing some to compare the vivid topper to the golden snitch from Harry Potter.

Princess Anne’s daughter Zara Phillips attended Prince William and Kate’s Royal Wedding in a doubly beautiful Philip Treacy headpiece. Her hat was black, but it was anything but ordinary. In fact, it featured a tilted oversized brim atop looped, light-catching adornments.

Perhaps the Duchess of Cambridge is excited about the Royal Ascot horse races, or maybe she’s exclaiming about all the incredible hats. Zara Phillips’ blue fascinator features a sky-high bow. In fact, it’s almost as tall as Prince William’s top hat.

While a flower accent or two is not uncommon in headwear, Camilla’s cap takes it to the next level. Her cap features a full head-turning bouquet. She wore her garden-party stunner to Zara Phillips’ wedding in 2011.

Camilla, Duchess of Cornwall, didn’t worry about upstaging bride Kate Middleton at her wedding to Prince William. She wore a sculptural stunner in a natural color. The hat featured an oversized curved brim accented by twists.

Laura Parker-Bowles nearly outdid her mother, Camilla, at the latter’s wedding to Prince Charles in 2005. The bride’s daughter donned a massive metallic fascinator. The hat features a complicated nest of gilded pieces and a golden bow.

While not a member of the royal family, Oprah is America’s next best thing and she made a surprise appearance for Meghan Markle and Prince Harry’s nuptials. Naturally, her hat of choice was larger than life with an array of flowers, feathers and more.

While not royals, high-society sisters Santa Palmer-Tomkinson (now Montefiore) and the late Tara Palmer-Tomkinson brought their own flowers to Prince William and Kate Middleton’s royal wedding in 2011. They each coordinated their floral toppers with their dresses for maximum impact. There were plenty of flowers at the ceremony, so these ladies got to keep their blooms.

Throughout her reign, Queen Elizabeth has worn a great many hats. Her style tends to be very coordinated and full of color. Her lime green topper for Prince Harry and Meghan Markle’s wedding was no exception, with a brilliant purple feather.