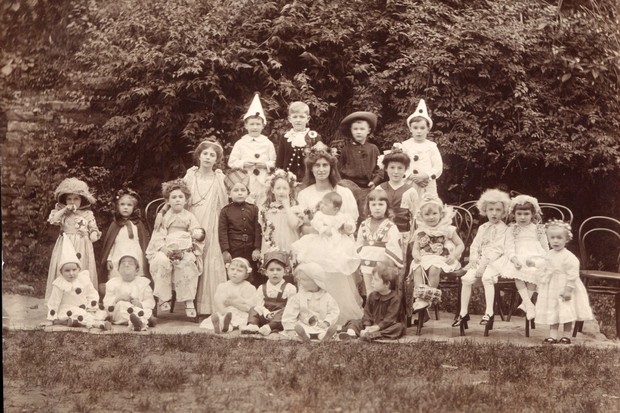 The art of taking photos was invented in 1826 and ever since then, it’s always been the way people immortalize events. From birthday parties to peace treaties people always want to make sure to remember things as they were. However, there are some photos out there that even historians are afraid to look at or that you just ordinarily wouldn’t think about. Here are some photos that will never appear in history books.

Yes, this isn’t New York, and it isn’t Las Vegas either. Something people seem to forget is that the Statue of Liberty was a gift from the French. It was built in France, then shipped over to America piece by piece to be rebuilt there. It’s not often to see any pictures of the statue back in France.

Salvador Dali may have been an artist, but even his contemporaries would call him eccentric. Something rather prevalent seemed to be his love of goats. Not only us he being drawn in a small, drawn carriage here, rumors had it that he used goat feces as “perfume”.

The Pet Deer Of Audrey Hepburn

On the subject of animals, did you know Audrey Hepburn owned a deer. She met the deer and named them Pippin while shooting the film Green Mansions. She fed them from a baby bottle and reportedly even snuggled up with them at bedtime.

It’s incredible and somewhat depressing that anyone could get 32 people to stand still on a checkered board to be used as the pieces of a life-sized chess game. It’s like something out of the Harry Potter. Although, this was in the Soviet Union, so sometimes, things like this are to be expected.

It’s like seeing a ghost. This is one of the last known images taken of the Titanic before it sunk in 1912. Most of the time photographs only show it in the harbor, casting off, so seeing an actual photo of it on the sea is a bit strange.

Have you heard of Laika. She was the first animal to ever go into space. She was a stray in Moscow that was sent into orbit in 1957 by the Soviet Union as a part of their space program. Unfortunately, Laika died a few hours after departure. A monument of her was later erected in Moscow to memorialize her.

Shortly after Laika, Ham the Astrochimp was used as America’s answer. The first animal sent into space by the US and was also the first Hominidae to enter space in 1961. Fortunately, Ham did make it back home. His only injury was some slight bruising on his nose.

People used to be incredibly judgemental in regards to what type of swimwear women could wear. Pictured here is an official whose job was to make sure women’s swimsuits met the minimum length they were allowed to be. This was in 1922 along the Potomac River in Washington, D.C.

Nowadays, behind the scenes footage of different films isn’t that hard to come by. But back in the day, it would be very rare to see anything relating to a “making of”. This particular image shows the photo shoot of that helped promote the film The Seven Year Itch. Specifically, it’s the famous photo of Marilyn Monroe trying to keep her dress down after walking over a subway grate.

The famous blockbuster in 1975 has its fair share of fans. And one of the most famous elements of that film was the giant, mechanical shark named Bruce. This was the film that made people afraid of sharks, so seeing someone rest in this creature’s jaws like that is pretty unsettling, even if we all know it’s fake.

There were 800,000 women that served in the Soviet Armed Forces during World War II. Most of those people were medical staff, but a few still served as gunners, pilots, and snipers. Here is an image of a woman smiling as she mans a machine gun.

The first woman to complete the Boston Marathon was Kathrine Switzer in 1967. It’s quite obvious that the men she ran alongside weren’t keen on her participation, grabbing onto and trying to stop her from running. Fortunately, in 1972, women became able to officially register and compete in the race alongside men.

Montana was, and still is, a mostly agricultural state. Women provide necessary assistance to helping to preserve that farm life. That’s probably why these men found it so necessary to hang up a “WIVES WANTED” sign outside their cabin.

The Path To Giza

This is probably one of the oldest travel photos ever taken. Back before the Pyramids of Giza had become tourist attractions, you could really see how far the desert stretched out, and how big those pyramids were, and still are.

A Telephone Tower In Stockholm

Have you heard of the Old Stockholm telephone tower. It was built in 1887 and connected over 5,000 phones in the city. The tower was built just before telephone companies began hiding their wires underground, so this tower was obsolete after 1913. The building was demolished after a fire in 1952, but even before then you couldn’t find a place like this in the world. Something that looks like a building covered in massive spiderwebs that is.

The Cafeteria In Disneyland

Disneyland has been around since 1955 and has had many visitors and workers come through it. And one of those most important to the park’s day to day activities are the cast members. It certainly is interesting to see all of these people dressed up and getting lunch in the middle of the day. Even those in the big mascot uniforms like Goofy and Mickey Mouse.

The 50th Anniversary Of Gettysburg

The Battle of Gettysburg was a particularly bloody battle during the American Civil War. Pictured here is an anniversary and memorial service where Union and Confederate veterans met to reconcile. In relation to the event, then president Woodrow Wilson said, “We have found one another again as brothers and comrades in arms, enemies no longer.”

Basketball was created by James Naismith, a Canadian-American sports coach and physician. He came up with the idea while teaching P.E. at the YMCA International Training School in Springfield, Massachusetts. Given how old a lot of sports are, it’s not very common to see a sport after having recently been invented. Although, a peach basket is a little ways off from the hoops we all know today.

Everyone’s familiar with the MGM lion, the lion that roars at the beginning of films and TV shows made by the MGM production company. Well, if you didn’t know before, that as an actual lion being filmed. Although, any of those images you see of a lion having its head stuck through a cone aren’t real, or at least not how they actually filmed the lion. It was as simple as filming a person, really. There have been a few different lions over the years. This one’s name is Jackie.

The Battle of Gallipoli was fought during World War I between 1915 and 1916. The Allied countries of Britain, France, Australia, and New Zealand were forced to retreat from the Turkish Army. This is considered a defining moment in Turkey’s modern history, and as a momento are these two bullets, having collided in midair during the fighting.

23 nuclear devices were tested at Bikini Atoll by the United States from 1946 to 1958. This image is of one of those tests. With all of the nuclear weapons that went off in the area, the island was made uninhabitable due to the radiation.

Pablo Escobar At The White House

Pablo Escobar had a personal motto “plato o ploma“, which means “silver or lead”. That speaks volumes for this drug lord’s morals. Given that knowledge, that makes this image of Escobar at the White House all the more interesting. It’s a little hard to believe someone as wealthy and powerful as him would’ve just been present for a regular tour.

Something you might not think about a lot is that the Eiffel Tower actually needs to be painted. This is a group of painters doing the dangerous job in 1932. It’s been repainted 18 times, normally happening once every seven years. It takes 60 tons of paint, 1,500 brushes, 1,500 sets of work clothes, and a full year for 25 painters to complete the job.

During the World Wars and Cold War, people were a lot more paranoid about incoming attack.s The British Isles in particular had seen quite a lot and citizens had more commonly begun using gas masks and bomb shelters. Another, less popular tool was the gas resistant stroller, designed to stop chemical weapons from harming your child. However, given their appearance, they never really took off.

Another idea that didn’t take off in London was the idea of these baby cages. In 1934, London proposed using them as a way for infants to get access to fresh air and sunlight, without actually leaving the house. The optics on the decision weren’t particularly great, so the idea rejected pretty soon after.