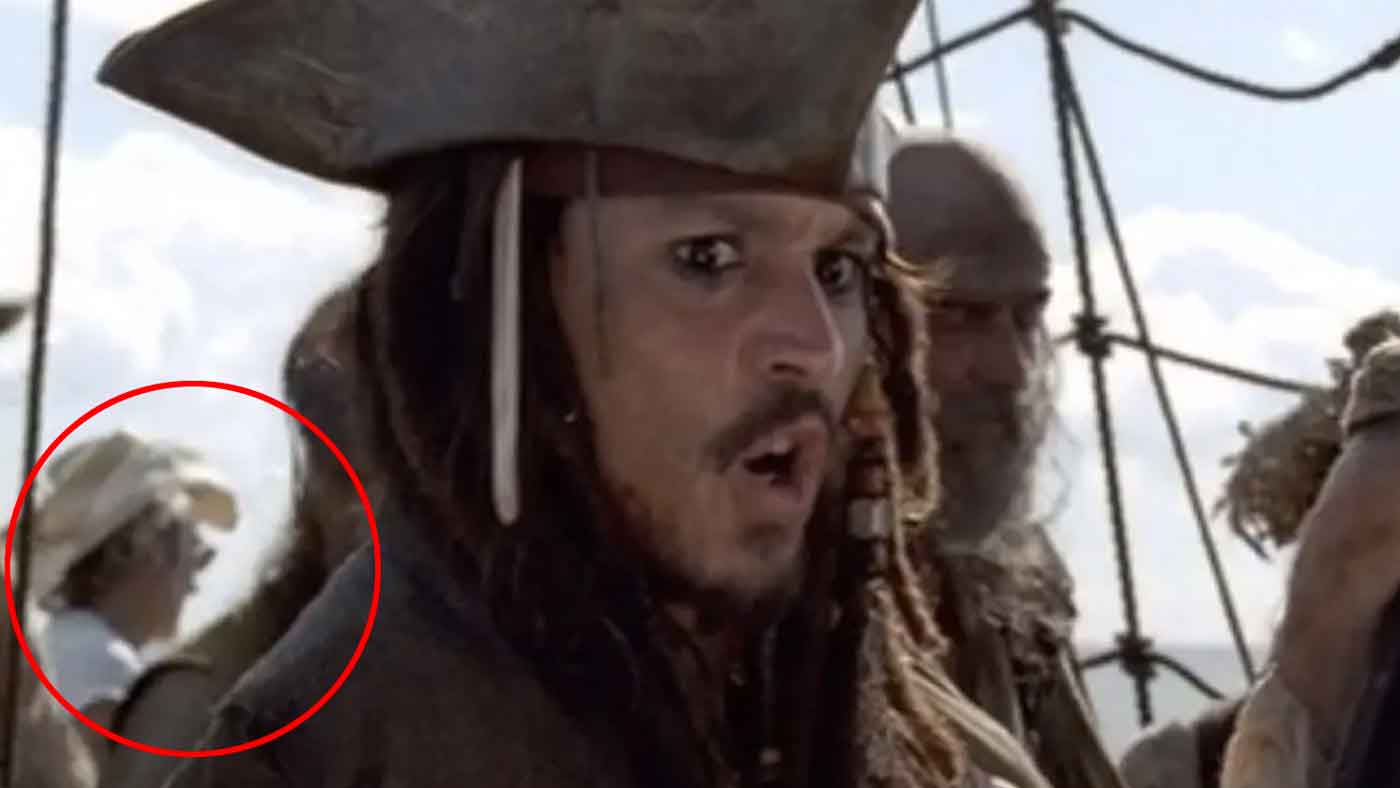 Movies are ways to transport audiences to another world. Whether they’re fantastical, futuristic, or even grounded in our own reality. However, some films have made mistakes, mistakes so minor, yet glaringly obvious, it could break one’s immersion in the movie. Here are a few of those mistakes.

Independence Day – Got The Address Wrong

Independence Day was a big blockbuster in its time. During the film, several landmarks and famous buildings are destroyed by an alien invasion, including the Empire State Building. However, in the movie, it’s visible that the ESB is located on 53rd street. In real life, it’s on 34th street.

If you’ve seen Top Gun you remember this scene. Where Maverick and Goose fly one over the other like this. However, this maneuver is entirely impossible. Not because it’s incredibly difficult to pull off, the vertical stabilizers on the jets would collide, leading to a fatal crash.

The Aviator was a phenomenal success. It stars Leonardo DiCaprio as Howard Hughes, a famous for many things, but the primary focus being on his achievements in modern aviation. Omitting any general changes made to tell a better story, there is one minor issue with the film. There’s a part where Hughes buys chocolate chip cookies. Those cookies were invented in 1930. And this movie takes place in 1928.

Django Unchained features the titular character played by Jamie Foxx, a freed slave during the era before the Civil War. During the film, Django dons a pair of sunglasses. And therein lies the problem. It’s not so much that sunglasses didn’t exist yet, but they weren’t very common and normally only used when prescribed by doctors.

Titanic was one of the highest grossing films of all time. And yet, even it still has a few inconsistencies. At one point Jack, played by Leonardo DiCaprio, tells Rose that he and his father used to fish at Lake Wissota. The problem with that is that the Titanic sank in 1912. Meanwhile, Lake Wissota hadn’t actually formed until 1917.

In The Hurt Locker, there’s a scene where you can see the characters playing on an Xbox 360. It’s a truly bizarre situation, because the Xbox hadn’t been released until 2005. Even stranger, the game they were playing, Gears of War, wasn’t released until 2006. And this movie takes place in 2004.

Fans of Pirates of the Caribbean are probably well aware of Captain Barbosa’s love of apples. Specifically, he seems to have an affinity for Granny Smiths. However, Granny Smiths didn’t exist until 1868, 140 years after these movies are supposed to be set.

Public Enemies is a Great Depression crime drama featuring Johnny Depp as John Dillinger, a bak robber.  At one point in the movie, Babyface Nelson and Pretty Boy Floyd, two other criminals, are killed by John Dillinger. But historically speaking, Dillinger had died before either of them.

One of the events in the famous movie is that the titular Forrest Gump receives a letter from Apple about investing. The film was in 1975 but the logo on the letter wasn’t used until the following year. Additionally, Apple wasn’t a publicly traded company until 1981.

Russell Crowe’s portrayal of Maximum in Gladiator is one of his most famous performances. Throughout the movie, Maximus is also referred to as “The Spaniard”. The word “Spaniard” is old, after all, it refers to people from Spain. However, Spain itself would not exist for another 1100 years from when this movie is set. Gladiator is set in the year 180 CE.

Saving Private Ryan has one of the grittiest and most accurate portrayals of war in film. During the final battle in the film, Captain Miller, played by Tom Hanks, finds himself critically wounded and making a final stand as he leans against a Ural M-63 model motorcycle. The one inaccuracy seems to be that this model of motorcycle didn’t exist until 18 years after the year the film took place.

Back To The Future – Marty’s Guitar

Back to the Future has plenty of fans. One of the most famous scenes from the film is when the protagonist, Marty McFly, travels back to 1955, goes to a high school dance, and plays a Gibson ES-354 guitar. Knowing that he didn’t bring his own guitar with him from the future, it’s definitely out of place. As that model of guitar wasn’t produced until 1958.

This may be one you may have considered yourself, but 300 was never a movie too interested in historical realism. At one point, Xerxes and his army do everything in their power to bring down the Spartans. Part of that involved using bombs. Of course, gunpowder and explosive residue of this nature hadn’t been invented until the 9th Century.

The Sound Of Music – Good Luck!

In The Sound of Music, taking place in German-occupied Austria, the Von Trapp family are stopped by Nazi officers. One of the officers soon signals to the family “good luck” by using a crossed fingers hand sign. However, in German-speaking countries, that’s not the hand sign they’d use. Instead, he should have pressed his thumbs. This is known as “Daumen drücken”.

In the biopic named after the Civil Rights leader, Malcolm X calls for someone to call 911 when his house is under fire. However, 911 didn’t exist yet. It wasn’t created until three years after his assassination.

Matthew McConaughey portrays Ron Woodroof in Dallas Buyers Club, a man who has HIV/AIDS in 1985. There’s a scene in the film you can see a poster of a red Lemborghini Aventador in the back. Although, the car wasn’t available until 2011.

In Panic Room, there’s a scene where Jodie Foster’s character lights a propane canister in an attempt to avoid it as it rises. However, propane is actually heavier than air, so the canister should have simply fallen to the floor in the first place.

Sherlock Holmes was a surprisingly good action mystery starring Robert Downey Jr. and Jude Law. However, the geography of the chase scene at the end doesn’t seem to make much sense. It starts in the sewers at the Houses of Parliament and ends at the Tower Bridge. However, those two locations are more than two miles apart, making a quick chase scene impossible.

Halloween is a famous film and a just as famous franchise. However, you’ve probably missed this minor error. Halloween is meant to be set in a fictional town, but it’s still supposed to be in Illinois. Yet, in the background, you can see Californian palm trees. Those types of trees probably wouldn’t be able to survive in Illinois.

Christopher Nolan is considered one of the greatest modern filmmakers in the modern era. However, even he’s prone to mistakes. A newspaper that appears in The Dark Knight misspells the word “heist” as “hiest”.

Lord Of The Rings – Gandalf’s Watch

This one isn’t so much a mistake on the writer’s fault, but Ian McKellen and the costumer’s. It’s a minor issue overall, but that’s what this list is for. During one of the big battles involving Gandalf the White in Lord of the Rings, played by the aforementioned Ian McKellen, you can see a watch on his arm. Considering their more medieval technology, it’s probably fair to say that they didn’t have watches in Middle-Earth.

Troy turned out to be a successful film, detailing the events of the Trojan War. The film had great action, surprisingly resonant emotional beats, and was just an overall great ride. However, there was just one problem with the movie. And that was the airplane visible in the Trojan sky millennia ago.

Remember that famous scene from Spider-Man, where he’s just learning to use his powers and begins experimenting in his room. That leads him to webbing a lamp and accidentally pulling it towards him, which soon breaks on a wall. Yet, after just a change in camera angle, you can see the lamp back on his dresser, completely undamaged, once again.

The Usual Suspects – Not The Same Plane

The Usual Suspects is considered a phenomenal neo-noir mystery film, with a great cast to boot. And the mistake this film made has nothing to do with any of that. The first scene shows the front of a 747 with four engines. And moments later, when it shows the same plane, we see the back of it and it now only has two engines.

It can be difficult to properly denote the passage of time in a film that takes place over multiple years. However, a film could at least attempt to age up the actors a little. Throughout The Patriot, none of the characters age at all. Not even the youngest children.