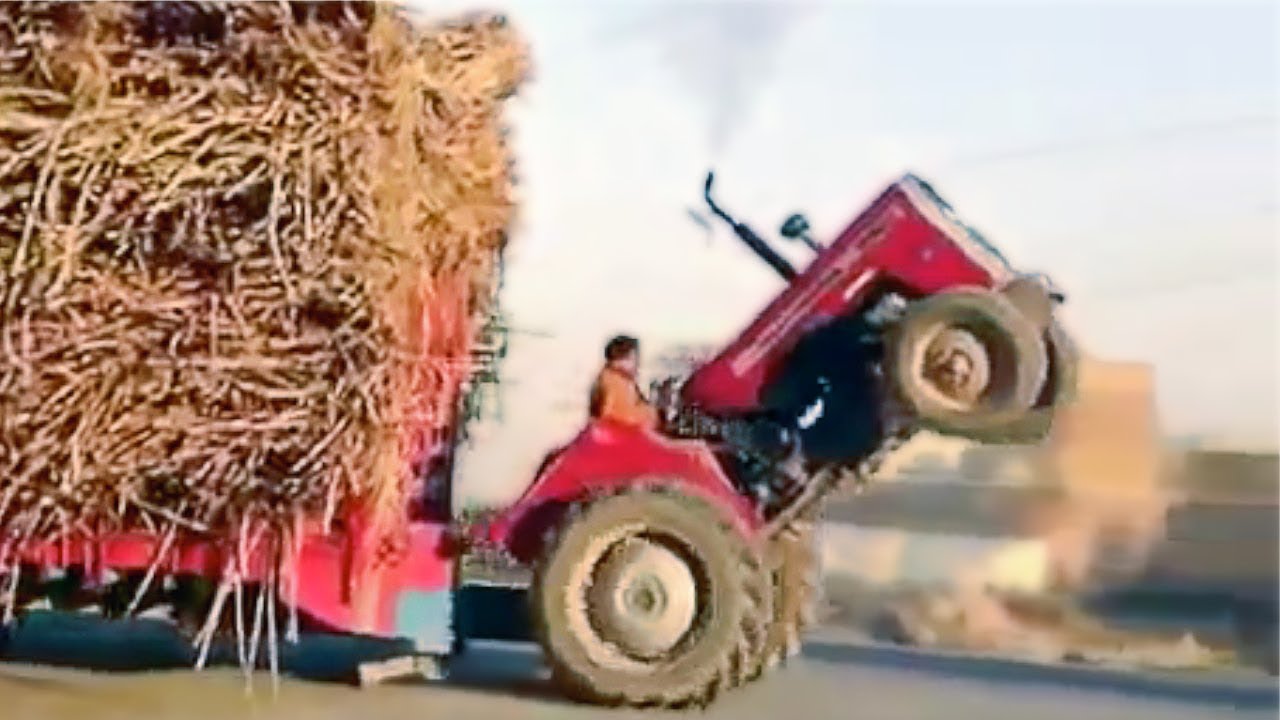 The tractor, a stable of modern agriculture and construction. Something that seems sturdy and reliable. So, you know it was the driver’s fault when it came to these mistakes. Here are a bunch of hilarious fails from tractor drivers.

What’s going on here exactly? It looks like the tractor was driving out of that hole when suddenly the Earth shifted. Either way, it’s stuck.

Judging from the ground and dirt in this image, the ground’s pretty flat. That seems to imply that this buried tractor in the foreground was intentionally buried. Especially ironic considering the fact that this model was designed to scoop up dirt and do the opposite.

This one might not have even been the driver’s fault. It could just be the fault of whoever built that pylon. Either that or the driver rammed into the pylon. Either way, it collapsed on on the tractor.

Trip To The Beach

What a nice trip. Everybody likes visiting the beach. Even tractors like to head over to it. Although, let’s hope they don’t get too wet.

Was the normal street sweeper out of service or something? Regardless, it doesn’t seem as though tying ten brooms together and putting them on the back of a tractor is the best way of replacing it.

This tractor seemed to have been really eager to get to the top of that railroad car. For what reason, that remains unknown. But now it seems to be a little stuck.

What a cute group of friends exploring this old tractor. Just goes to show you that puppies can make anything look better. And that includes an old, rusted tractor slowly sinking into mud.

The mud has to be some kind of quicksand if three tractors got stuck in it. Man, this must’ve taken hours to dig out.

Tractors are best when used on flat land. Going down a ramp would be a bad enough idea. Who decided to have this tractor go down the stairs?

Looks like someone was a little eager to get home from a hard day’s work. And they’ll probably be paying for that eagerness for quite a while.

Looks like they got out of the tractor just in time. Fortunately no one has to go down with the tractor here. Although, they might need someone to pull it out of that lake later.

It looks like this one’s a little bit more than tilting. It looks like it’s in the process of falling over. And it’s already destroyed the roof of that house in the background.

Your eyes may first take you to the fallen off wheel. But after only a few more moments of observation, you’ll see that this tractor is incredibly messed up. It’s probably easier to count the things that aren’t wrong with this tractor than the ones that are.

Keep The Weight Off

Speaking of damaged tractors, this one’s missing a wheel too. Fortunately, the driver’s got a friend to compensate. If you put all the weight in the right place, you can keep the thing balanced. Although, it’d be much easier to just get a new tire.

Slide Into The River

Again, tractors are best if used on flat surfaces. Although, whoever was driving this tractor may have simply had it get away from them. How else would explain a tractor sliding off into a river from pretty solid ground. Then again, the driver might be bad at driving tractors.

It looks like someone got into a little bit of trouble while tilling the land with their tractor. It might’ve rained making the ground a bit muddy or something and caused the tractor to sink in. Regardless of the reason, its gonna take some effort getting that tractor moving again.

Look out! You’re going too far! Oof! When a lake’s frozen, that doesn’t mean the ice is that thick. It looks like it took a truck to pull this tractor out of the frozen lake.

This one might not be a mistake, but whoever put it together surely has a great sense of humor. The spider tractor may not be able to do everything a spider can, but it can certainly look intimidating.

Playing With A Toy Jet

Oh wait, that’s a not a toy! Hopefully that plane’s out of service because that tractor driver shouldn’t be messing with it like that. Although, that does look pretty fun…

This’ll be a story to tell the kids. What a way to bring the bride to her wedding then in the scooper of a tractor. That’s what you can call “riding in style”.

Oh no… This isn’t good. Someone put too much pressure on this tractor. It looks like it overheated. Or some of the gas ignited.

Well at least the only property damaged by this turned over tractor is the tractor itself. Can’t say the same for a few earlier entries on this list.

Someone tried stacking up too much hay. It’s so much the tractor can’t even move forward. Best it can do is pop a wheelie.

Reaching Out From The Snow

Here we have another buried tractor. This one seems to be reaching out of the dirt and snow like a zombie coming out of its grave. It certainly makes for some funny imagery.

Rusting By The Ocean

Here we’ve only got part of a tractor. The rest of it probably didn’t have much of a fun time at the beach. Not only is this just the scooper, it looks pretty rusted from its extended stay in the ocean.

Come on son! Get down from there! With that smaller tractor, probably a toy, so high up the tree, it looks like a parent trying to rescue its child.

Too Close To A Tidal Wave

This tractor fail actually has a more concrete backstory. A tidal wave of some sort hit the area while it was close to the lake shore. And, with the way the dirt and mud moved, that ended up burying the tractor. Hopefully, they’ll dig it out eventually.

This is why you shouldn’t ignore those weight limits on a bridge sign. You might end up with situations like this. And this is a bit more bad of a situation to be in than just needing to dig your tractor out of some mud.