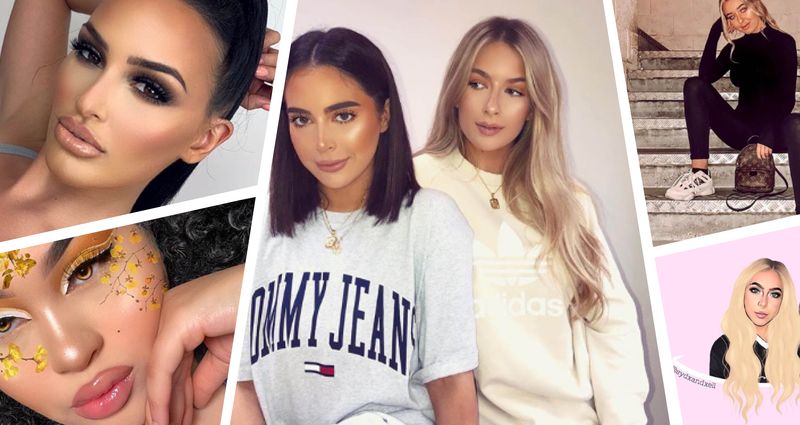 Do you want to become an Instagram influencer? Well, you better be willing to put in a lot of work, cause it’s not as easy as you might think. And a look behind the camera of how some of these photos are taken might surprise you. Let’s just take a look at your expectations vs. the reality of the situation. Then you might end up changing your mind.

It seems as though Instagram models are always posing in some dangerous way. Rianne Meijer seems to be known for doing stuff like that. Although, primarily as a joke to parody other influencers. You can see the utter fear on their face in the second image as they put their head out of the window of the car. Although, you can also tell from the background that the car’s parked.

Influencers often make working out look so easy. It’s almost like they lack the ability to sweat. Geraldine West put an end that thought by posting a photo of her going out on a run. Makes it easy to see that influencers are still people, just like the rest of us.

Have you ever tried petting a pigeon. It’s not really something that can be done. They’re a lot more volatile a species than you might think. These images taken by @ViennaDoLL on Twitter exemplifies that perfectly.

Your backyard can sometimes be the perfect place to get an amazing photo. You can take some pretty good ones with just a tree and some leaves. Although, keep in mind how ridiculous you might look from the outside.

Dogs have Instagram accounts too, although they’re run by humans. This pug is often taken in photos where it’s on a plane. However, that’s a doctored photo. It’s really just looking at a washing machine. The machine’s noise is also the sound of the supposed plane engine.

Getting Out Of The Pool

There’s so many picture perfect images like this where someone’s just doing a mundane thing. In truth, no one can make that look great. The second image is what they actually look like as they’re climbing out of the pool. Their hair doesn’t even look wet in the first photo.

When You Wake Up

People often take selfies of themselves in the morning, claiming they just woke up like that. Everyone knows that people actually get done up after waking up. @the_truth_is_not_pretty decided to post contrasting images of a done-up photo and them actually having just woken up. It’s like night and day.

A late night trip to the shore is rarely ever glamorous, but some Instagram models make it work. Not Rianne Meijer though. She show’s the reality of going out late at night in a big coat. And it’s not that pretty.

Remember that talk of Instagram models doing dangerous things while posing? Well, here’s another example of that. This young woman’s in a pretty precarious situation, but she’s got a pair of people on her back. They’re just there to make sure she stays safe while the photographer gets the shot.

People take these cute photos of them getting out of bed or laying down. And you probably don’t think much of just that. But upon closer examination, you realize that both of their hands are in the photo. You can try using a tripod or get someone else to take the photo, but that’s not what @ViennaDoLL does. Instead, she takes the photo with her foot.

@ViennaDoLL’s got another photo, this one of her on a roller coaster. The point where they take a photo on the ride is always at the climax when everyone would freak out. You can take a cute picture before the ride starts, but the reality of it will always come through later.

Are you aware of what the “follow me” photo trend is? It’s where the subject of the photo is reaching back to take the hand of the photographer, beckoning them to follow them. Geraldine West decided to make a parody of that type of photo, possibly showing the truth of some of those photos. That being that she was actually holding the hand of a mannequin.

Never eat noodles on the first date. It’s just not a pretty sight. There are some Instagram influencers that make slurping down noodles look glamorous somehow. Although, that’s before they actually start trying to eat them. One look at this before and after shot and you’ll see that no one can make that look good.

Vacation photos of the famous always seem to look glamorous. They’re intended to make the general masses jealous after all. However, when snapping a photo in a sunny or tropical locale, the natural lighting can get a bit tricky. That being, you’re always gonna have to squint if the sun’s getting in your eyes.

Considering their good looks, people would often think that Instagram models don’t eat anything unhealthy. And that would include fast food. Well, as it turns out they do eat fast food. And Rianne Meijer decided to exemplify that with this Instagram post. There may be some models that pose a little bit more flatteringly in their posts, but Meijer decided to look 100% genuine here.

It’s All About The Angles

Riane Meijer also is here to show us the importance of angles when taking a picture. The first one is a slightly lower angle shot, with her head tilted upwards. The second one is Meijer just looking down with the photo coming from directly below her. It’s not a flattering angle and it shows off her double chin. Never take a photo from a lower angle.

How often do you see Instagram photos of women in skirts and short-sleeve shirts posing outside in the winter? Cause once is enough. There’s no way someone can look that good and stay warm. As a matter of fact, they don’t. This one influencer shows the reality of the situation. As soon as that shoot’s done, you bundle up.

When it comes to shopping, Instagram models seem as though they can just afford the most expensive clothing items. Well, if it’s not given to them by whoever they’re promoting, that’s because they buy things cheaply. Social media influencers may be popular enough to be able to use that as a career, but they’re still not rich. Geraldine West shows the real contrast between shopping at Louis Vuitton and getting your basic necessities at Aldi.

Chilling In The Pumpkin Patch

When the leaves start to fall and the pumpkins start to grow, it’s the perfect time to take autumn photoshoots. Well, keep in mind that trying to get the perfect photo in a pumpkin patch could mean getting tons of dirt on your shoes. That’ll make the situation a lot less glamorous after the fact.

Don’t try action shots on your own. They can get pretty dangerous. Fortunately for this young woman, there was a soft hill of grass behind her. The initial shot looks cool, but the after photo is not.

A lot of Instagram influencers take photos with pets to help boost their platform. Animals are cute after all. But remember, they’re not just cute creatures that help you gain more followers. They’re living animals that need to be taken care of. And that’s how things can lead to you cleaning your puppy’s pee off of your floor.

The Reality Of Exercise

How many glamorous shots of people working out or in sporty clothing do you see on Instagram? A lot, right? They look like they haven’t even started working out. This young woman looks absolutely perfect in the first image. But then after she relaxes her stomach you see what she actually looks like. She was just trying really hard to look good before.

These lavender-colored trees do look lovely on their own. However, they may not look beautiful enough for someone taking a photo. And that’s where photoshop comes in. The first image is someone that tried to make everything look bright purple. The second image is the reality of the situation.

How To Make A Thumbnail

Another situation wherein someone decided to take a photo in a death-defying situation. It may not look that dangerous by itself, but the angle at which they’re leaning back they could easily fall from. Fortunately, she’s got a safety net. And that safety net is someone grabbing her by her bag’s strap and making sure she doesn’t fall.