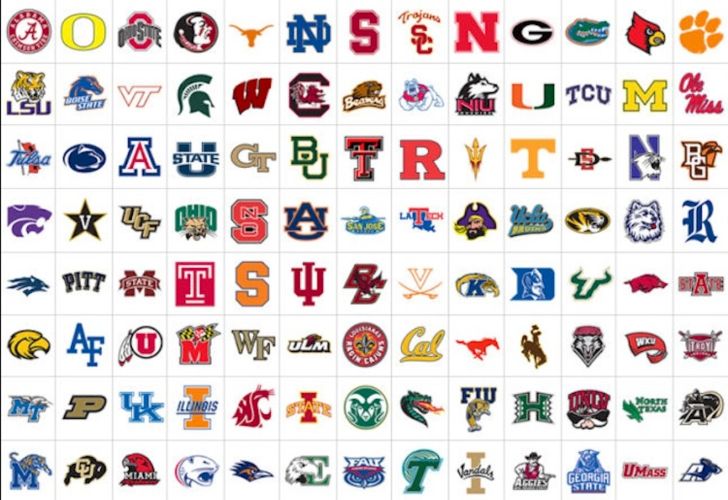 College football seems to be almost as popular as football at the professional level. In some states it is more popular. It’s widely televised and everyone wants to see who wins in the end. However, with all the twists and turns, things can be a little confusing. To show the skill of the top college football teams right now, here are their current power rankings.

The Tar Heels have been rising through the ranks are on the right track to the conference title game. Although, they’ve been cutting things close with their scores. A good amount of their wins have only been by one score. Although, the quarterback, Drake Maye’s, been showing off his skills. He’s gotten 1,903 passing yards and 21 scoring passes with just three interceptions this season.

The Wolfpack had a poor opening performance, but still managed to eek out a victory against ECU in Week 1. Devin Leary, the quarterback, actually played on his birthday. And he did a good job, throwing four touchdowns and running two more for a 55-3 victory.

While the Mississippi State Bulldogs lost against LSU a few weeks ago, they’ve since come back with a vengeance. Will Rogers’ passing game has seriously improved which allowed them to win with an impressive 40-17 lead over the Hogs. Not to mention, he threw for more than 350 yards in that game.

The Boilmakers’ quarterback and wide receiver, Aidan O’Connell and Charlie Jones, have been quite productive this season. Purdue’s been finding different ways to prevail in comparison to their piers. They still have a lot of errors in their plays, but put themselves in a position to challenge for the Big Ten West Division.

In Week 6, the Bearcats managed to return from a ten point deficit and grounded out a 28-24 victory over South Florida. The offense has proven itself, with running back McCelland even reaching a career-high 179 rushing yards and two touchdowns. They had a slow start at the beginning, but the second half is where they really shine,

In the Fighting Illini’s game against Minnesota, Chase Brown managed to lead the team in rushing yards. Offense has proven to be shaping up nicely, as has defense, which has been stout and opportunistic. Currently it actually leads the nation in scoring defense, with 12 interceptions over six weeks.

In their Week 6 game against Oklahoma, the Longhorns scored their most points ever in their 118-game history. They handed the Sooners their third-worst defeat margin ever, as well as their worst shutout loss. They managed to pick up nearly 100 more yards in the game than the Sooners, although they did have to keep switching out their quarterback.

After a few consecutive losses, Kentucky really needed a win against Mississippi State. And they certainly managed to get one. Keeping their quarterback, Will Levis, healthy has been the key to their success. Although, they also need to find a way to keep him safe during plays. He’s taken a few too many hits this season. It’s the Wildcats defense that’s playing most of the weight at this juncture.

The Nittany Lions’ running game had been lost for years. Bit it seems as though they might have finally found it thanks to freshman Nick Singleton. He’s already had ten carries and run for 179 yards this season. Penn State’s seems just about ready for their next game.

During their game in Week 5, Syracuse played all over Wagner with a 59-0 shutout. They managed to get 631 total yards, with two players passing the 100-yard mark. Sean Tucker even ran for 232 yards on 23 carries. And their defense proved to be so effective that they limited the Seahawks to only 50 total yards and four first downs. THey’re at 5-0 for the first time since 1987.

The Wildcats really made an upset against Oklahoma in Week 4 with the final score being 41-34. They’ve demonstrated a balanced offense, with 511 total yards 277 of which were on the ground. Adrian Martinez, the new quarterback transfer, accounted for 382 of those yards as well as five touchdowns.

The Utes had a poor opening week against Florida, but have been improving their standing since defeating Southern Utah. Scoring 38 points in the second quarter, only eight FBS team have scored more in a single quarter. Ten different players actually got at least one carry during the game.

The Ducks had a decisive win in Week 3, giving them the confidence they needed. They’ve displayed a balanced offense and a strong run defense in their games so far. It seems as though a prior loss might be one of the only things keeping them away from a a higher ranking on this list.

Sam Hartman is back on the Demon Deacons’ starting lineup as the quarterback. He missed the season opener thanks to a blood clot near his collarbone, but his return has allowed for the team to improve their game. He’s a fifth-year senior that led Wake Forest to the ACC title game last year, threw for 300 yards and four touchdowns with no interceptions. He’s definitely certified. It’s just a matter of seeing if he can elevate the rest of his team in the coming weeks enough to improve their ranking.

The Cowboys rebounded after giving up 546 yards to Central Michigan. In their game against Arizona State, they held the Sun Devils back to only gave up 354 yards. Dominic Richardson also did an incredible job as a running back, getting his third 100-yard game and making five receptions. The power ranking for the Cowboys could possibly move up to the top ten in the coming weeks if they keep playing like this.

The Trojans have displayed that they currently have one of the best offenses in college football. Caleb Williams completed 20 of his 27 passes for 341 yards and four touchdowns in Week 2. The team was held up a little during the second half, but their victory was never in doubt. The defense of the Trojans is a little mixed in comparison though, but the team’s overall managed to consistently score more than 40 points in each game.

15 penalties and a terrible showing from the offensive line, and almost no production from its receivers. Yet, Alabama still managed to beat Texas. They’re currently relying too much on Bryce Young, and those mental mistakes could really cost the Crimson Tide in the future.

In their Week 5 game against the Huskies, the Bruins proved to have a capable offense, despite a hiccup early on. UCLA’s offense got almost 500 yards  and 40 points total for the team. They managed to pull off an upset that made them a surprise contender for the Pac-12.

The Horned Frogs decimated Oklahoma during their Week 5 game, with a 55-24 win. It’s only the second win they’ve had over OU since joining the Big 12 in 2012. They gained 668 yards, which included 361 rushing yards and average 8.8 yards per carry. It truly was a dominating performance. Max Duggan even became the first player with three passing touchdowns and two rushing touchdowns against Oklahoma since Patrick Mahomes in 2016.

Luke Altmyer’s turn as the starting quarterback for the Rebels led to a quick 28-0 lead. Unfortunately, he injured his throwing shoulder and was forced to leave the game. While they still won 59-3, Altmyer’s been replaced as the opener due to his injury. Fortunately, they seem tstrong enough to keep pushing forward, even without him as the starter.

DJ Uiagalelei completed 21 of the 27 throws he made for 231 yards in Week 2. The Tigers’ offense looks sharp, and even the backups seem capable enough to hold down the fort. They should have plenty of encouragement moving forward. Although, more recent games have shown that they still have areas they can improve

J.J. McCarthy got to start as the quarterback in Week 2, leaving Jim Harbaugh to battle for the spot back. He threw the ball 12 times, only missing the target once and getting 229 yards and three touchdowns from it. Although, he also didn’t play the whole game. The Wolverines’ defense has also continued to have success, holding Hawaii at only 47 yards in the first half of the game.

The Volunteers managed to barely get an overtime victory at Pittsburgh last Saturday. It was a real back and forth game, taking opposing players out of commission, while several fumbles and other mistakes almost cost them the game. Tennessee’s defense really pulled through, keeping them in the game until the bitter end.

The Bulldogs have been really excelling with quarterback Stetson Bennett. His plays haven’t been perfect, but at the end of Week 2 they had another blowout victory (33-0). Bennett was done by the third quarter, having passed for 300 yards and a touchdown, as well as rushing for a score. Despite emptying the bench in the second half of the game, the Bulldogs have yet to give up a single touchdown, at least in their first two games this season.

The Buckeyes passing game really surged in Week 2. Marving Harrison Jr. got 184 receiving yards and three touchdowns, while Emeka Egbuka got 118 yards and one touchdown. C.J. Stroud’s cannon arm averages 19.5 yards per completion. While the offense is thriving, the defense seems to be struggling a little bit, but still didn’t allow a single touchdown in the game.