Child Stars, Then And Now - The Delite Skip to content 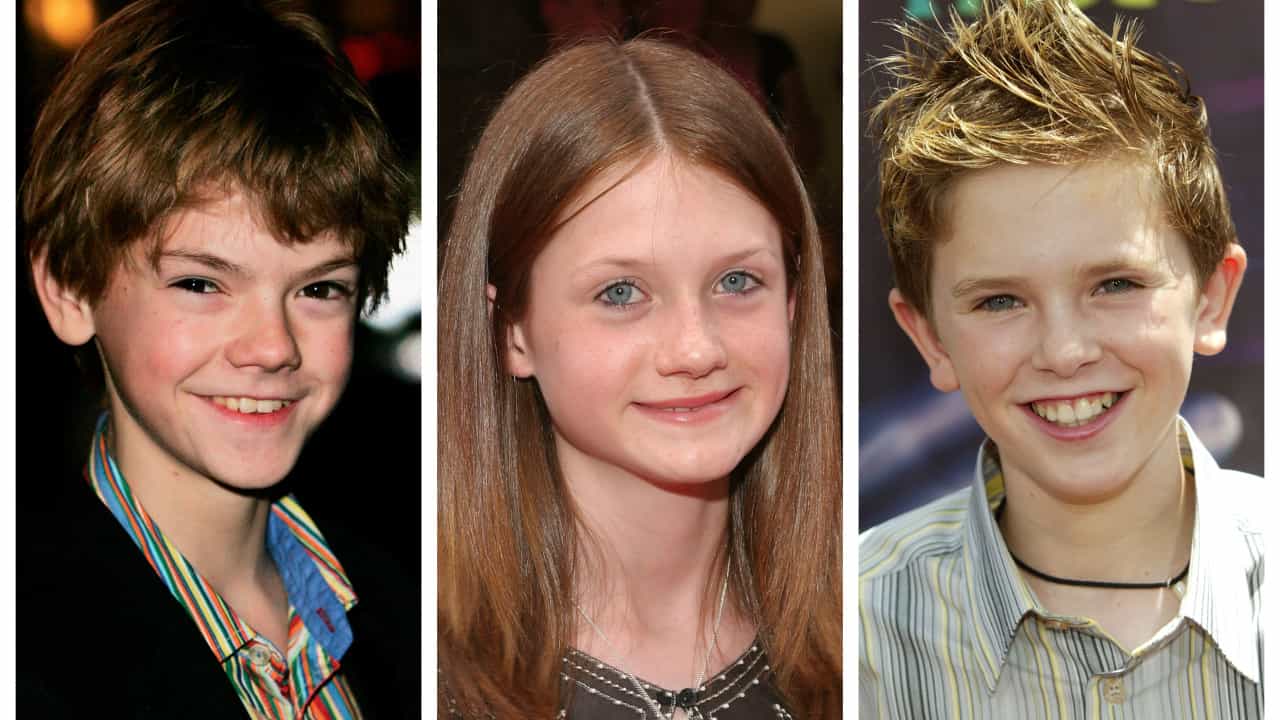 Show business can be a hard life, and it’s extra hard on child actors. Sometimes, they even end up missing on a lot of milestones most children have, instead becoming famous. And in some cases, they end up being bullied because of their portrayal of a certain character, leading them to leave show business altogether. However, some people that started as child stars are now adults, and are still performing today. Here are a few of them to show how much has changed.

Anna Sophia Robb had a quiet rise to stardom. She appeared in supporting roles in movies like Because of Winn-Dixie and Charlie and the Chocolate Factory. But since then, she’s found a great amount of personal fame. She appeared in the hit movie Bridge to Terabithia, as well as other films like Race to the Witch Mountain. She’s since been making more appearances in television and film, and even Ed Sheeran’s music video for his song, “Shivers”.

Daniel Radcliffe still hasn’t quite shaken the image as the Boy Who Lived in the Harry Potter franchise. Everyone got to see him grow up, not just as Harry, but as an actor too. Now well into adulthood, Radcliffe is still acting, appearing in films like Kill your Darlings and the television series Miracle Workers.

Thomas Brodie-Sangster appeared in a few movies as a kid, including Nanny McPhee and Love, Actually. He kept up that acting career into the later years, taking on television roles as well. He’s been in Phineas and Ferb, Games of Thrones, and Queen’s Gambit.

While Chandler Riggs is most well-known for his role as Carl on The Walking Dead, it wasn’t his first foray with zombies. He was actually in a horror movie called Jesus H. Zombie in 2006. Now an adult, Riggs has appeared in a new series called A Million Little Things.

Jerry O’Connell’s come a long way since he was the chubby kid from Stand by Me. He appeared in several films, but eventually took a break from acting in 2009 to attend law school. Of course, he’s since returned to Hollywood, a handsome-looking man. Currently, he’s a talk show host.

Joseph Gordon-Levitt appeared in a few properties as a child, including the hit series 3rd Rock from the Sun. But it was when he reached adulthood that his career really took off. 10 Things I Hate About You, Inception, and The Dark Knight are just a few of the properties he’s been in.

Freddie Highmore was one of the most popular child actors for films when he was still young. He appeared in a ton, including Arthur and the Invisibles, Women Talking Dirty, and, most famously Charlie and the Chocolate Factory. He’s appeared in several other properties as he’s gotten older, and made the jump to television. Some of his most recent work includes Bates Motel and The Good Doctor.

Thora Birch had an early start in films like Hocus Pocus. Initially playing a little sister, she’s continued acting into adulthood. She even won a BAFTA award for Best Supporting Supporting Actress for her role in American Beauty. She’s continued to give stellar performances onscreen, even after taking a four year break between 2012 and 2016.

While it wasn’t their first acting role, Dylan and Cole Sprouse are most famous for playing Zack and Cody in The Suite Life franchise. They took a break from acting after the show ended to go to college, but eventually returned to the spotlight. They’ve since struck out individually, appearing on TV shows like Riverdale for Cole and movies like After we Collided for Dylan.

Tyler Posey started his acting career at the young age of 11. He appeared in films such as Collateral Damage and Maid in Manhattan. He lost out on the role of Jacob Black to Taylor Lautner in Twilight, but did get to play a famous wolf of his own. He ended up playing Scott McCall in Teen Wolf.

Kiernan Shipka probably had the youngest beginning of her career. She made her acting debut at five months in an episode of ER. Although, he big break came from her role in Mad Men. Since the show ended in 2015, she’s since moved on to more voice work, as well as portraying Sabrina in Chilling Adventures of Sabrina.

Bonnie Wright’s most famous role was as Ginny Weasley in the Harry Potter franchise. A major supporting role, we all got to see her grow up over the years, just like all the other child actors. After the last movie wrapped up, Wright decided to become a producer instead. She hasn’t been in front of the camera in a while, but she does ample amount of work behind it. She even once directed a short film called Know Thyself.

Abigail Breslin started her career in Toys ‘R Us commercials. But her first big acting break was in the movie Signs. With that movie’s success it shot her into stardom. She’s appeared in other films throughout the years as well, including My Sister’s Keeper, Zombieland, and Stillwater.

Christina Ricci first began acting at age nine when she was casted in the film Mermaids. Her breakthrough role was as Wednesday Addams in The Addams Family. This got her more roles with the creep factor, such as Sleepy Hollow and Monster. In her adulthood, she still takes the more chilling roles, appearing in Ax and Cursed and Yellowjackets.

Rupert Grint was another Harry Potter actor, with his breakthrough being the iconic best friend Ron Weasley. Grint was a big fan of the books, so he jumped at the chance to audition. While he hasn’t appeared in as many films as his former co-stars, Grint’s still acting in television and on the stage. He also acts as a producer for television.

Miranda Cosgrove was one of the most famous child stars on Nickelodeon. After a breakthrough role in School of Rock, she had starring appearances in shows like Drake and Josh and iCarly. For a time, she was even the highest-paid child actor in the world. She’s begun to focus more on a music career in more recent years, but has since turned back to acting. Currently, she’s once again starring in the iCarly reboot on Paramount+.

Everyone remembers Frankie Muniz for his titular role in Malcolm in the Middle. And that led him to other movie roles, such as Agent Cody Banks, Big Fat Liar, and Dr. Dolittle 2. As an adult, Muniz has taken a break from acting and is focusing more on a career in motorsports. He’s also the drummer of the rock band Kingsfoil.

Emma Roberts acting debut was with her aunt, Julia Roberts. She continued acting through the years, growing up before everyone’s eyes. She’s been in movies and shows like Blow, Hotel for Dogs, We’re the Millers, and Scream Queens. She’s had a pretty steady career.

Dakota Fanning debuted on ER at age five as a car crash victim, and she’s admitted to it being one of her favorite roles. Although, it was her role in Man on Fire that earned her critical acclaim. She’s continued her acting career into adulthood, not just having a strong acting career in live action, but in animation as well.

Lindsay Lohan has had a rocky life. She debuted as a cute, freckle-faced ten-year-old in the soap opera Another World. But as she got older, she appeared in more movies, including The Parent Trap and Freaky Friday. But, as an adult her life began to spiral when she got into drugs and alcohol. She’s been making a comeback recently. Most of her roles haven’t been particularly well-received, but she’s doing her best.

Danielle’s big break was as Topanga Lawrence in Boy Meets World. After the show ended, she still had some minor roles in movies and TV series. She even hosted The Dish, which aired on The Style Network. But in 2014, she began reprised her role as Topanga in the spin-off Girl Meets World.

Soleil Moon Frye first appeared in the made-for-TV movie Missing Children: A Mother’s Story. But it was her role in Punky Brewster that made her a household name. She’s since guest-starred in numerous TV shows. At age 45, she’s still acting, and even appeared in the Punky Brewster remake. But when she’s not acting, she’s also directing.

Initially just having acting roles in commercials, Michelle Trachtenberg managed to get the head in Harriet the Spy. Not long after, she played Dawn in Buffy the Vampire Slayer. She’s since had a more sporadic portrayal of characters in different movies and television series. One of the most notable being her role as Georgina in Gossip Girl.

One of Zac Efron’s earliest roles was as a guest star in an episode of Firefly. But his real big break was when he played Troy Bolton in the High School Musical franchise. He’s had a lot of acting roles since then, even breaking free from his more child-friendly appearance with movies like 17 Again and Bad Neighbors. He’s had some trouble with rehab over the years, but he always manages to get back on his feet.

It’s impossible to forget about Ariel Winter’s role as Alex Dunphy in Modern Family. She won several awards for her role during its production. And over the 11 years the show aired we saw her grow into a adorable child to a beautiful, young woman. She’s made a few appearances in other media, before and after Modern Family ended, but it seems as though she has nowhere to go but up.