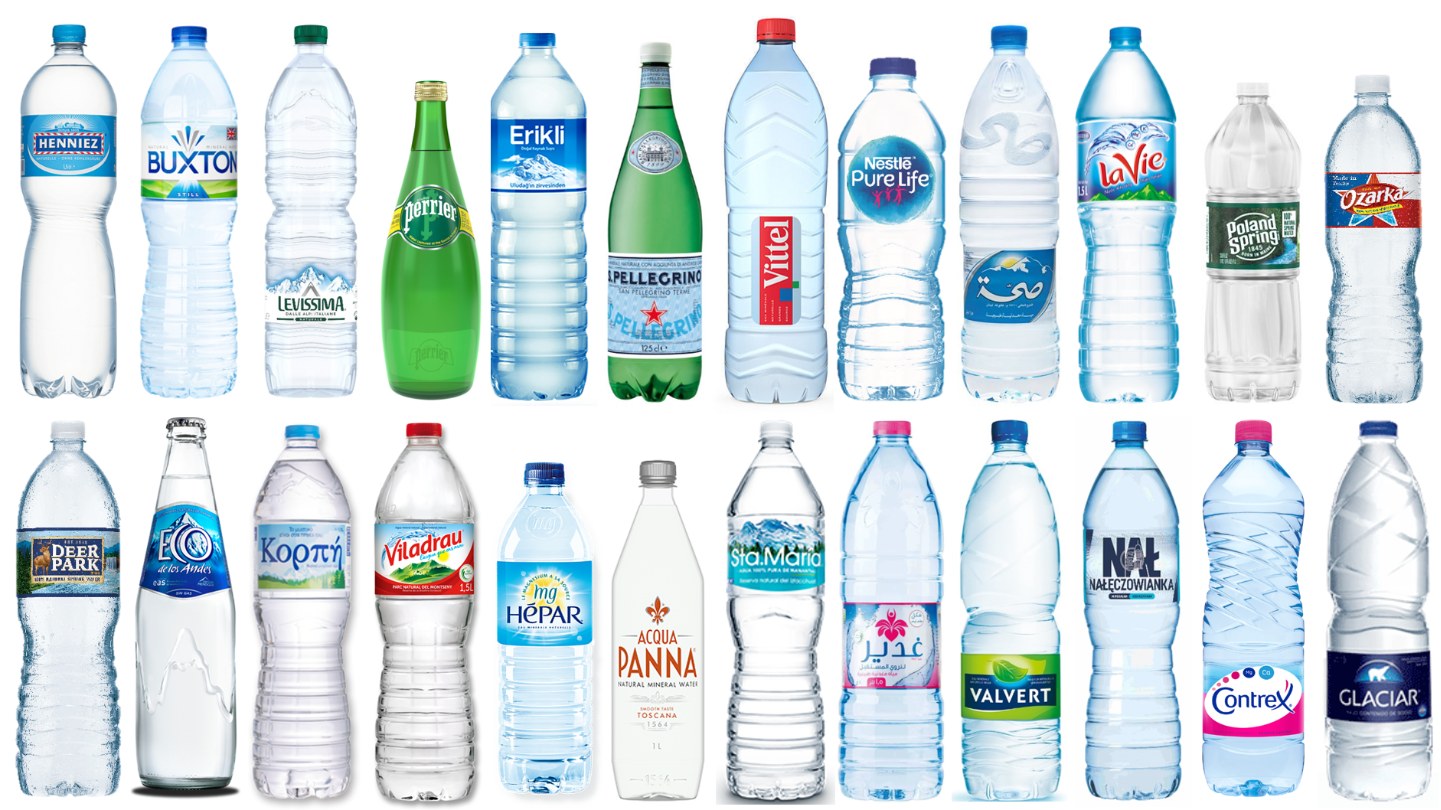 Water is the most important thing people consume to stay alive. So, clean drinking water is important. And that makes bottled water, a portable sources of the liquid, even more important. However, not all bottled water brands are created equal. Here are all of the major brands ranked from worst to best.

Is this actually even water? Propel has a pretty long list of ingredients, something you wouldn’t expect from something just labeled as water. This is a Gatorade product after all, which makes promises relating to replenishing your electrolytes and vitamins. However, it also has sodium, artificial sweeteners, and preservatives.

Nestlé Waters is the largest bottled water corporation in the world. As a result, one would expect the water with their name on it to be higher on this list. But the sad truth is that their own water is just painfully average. It doesn’t taste particularly bad, but it certainly doesn’t make you want to come back for more.

Have you ever heard someone talk about Dannon Spring Water? Probably not, and that should tell you all you really need to know about it. It’ll quench your thirst in a pinch, but it won’t do much else for you.

Dasani is certainly a more familiar brand of water. It’s also rather consistent. It tastes the same no matter what you do to it. It also just tastes like tap water, which is likely not why some people are buying bottled water in the first place.

According to Penta, themselves, their water undergoes an 11-hour, 13-step process to get purified. That certainly sounds good, and Penta tried to make it seem like their water was superior to that of normal water. And that’s why they’ve suffered numerous lawsuits over the years.

Poland Spring is one of the many brands owned by Nestlé. It actually is groundwater that was taken and harvested from localities in Maine. Originally, it was taken from a legitimate spring in Poland, but demand became too high forcing them to use other springs across the state.

The hook for Eternal Water is that it’s self-filtered from traveling through layers of ancient rock, absorbing necessary minerals as this occurs. You can really taste those minerals when you take a sip too. It’s like taking a sip from a water fountain in an elementary school.

Another spring water, filtering out anything dangerous, but all of the flavor comes straight from the ground. The water was originally sourced in Deer Park, Maryland, but is currently also sourced from locations in Florida, Pennsylvania, Maryland, New York, South Carolina, and Michigan.

Like Penta, Aquafina goes through a rigorous purification process. This one has a name though, a seven-step process called HydRO-7. They use reverse osmosis, ultraviolet light, and ozone sterilization to remove everything you otherwise wouldn’t want in your water. Which is good, since Aquafina just comes from local municipalities.

At least Crystal Geyser’s water is relatively inexpensive. It has those regular “bottled at the source” claims that all spring water seems to have, although it’s obviously transported to a different location before it’s legitimately bottled. It’s not a particular interesting taste, but it’s certainly not bad.

Right out of Florida, this is a pretty good brand of water. As a spring water, it was purified naturally through limestone. It certainly has a better flavor than the plastic taste of most other water brands. Some people apparently have trouble differentiating this one from Fiji Water on a blind taste test, and this brand will actually fit in your cup holder.

Ice Mountain’s owned by the same corporation as Zephyrhills. It’s a sort of midwestern equivalent to its more eastern brother. It’s primarily sourced from Michigan, but they also get the water from springs in five other states.

And now is the south central version of Ice Mountain and Zephyrhills. After being sourced from springs in Texas, the water is put through an 11-step quality process. It’ll always have this slight mineral taste.

Arrowhead’s sourced through 13 different springs across the western United States, and it’s primarily sold there as well. It doesn’t taste too bad, but it’s still only somewhat above average as far as flavor goes on this list.

Life tries really hard to give itself a cool-looking bottle. And it kind of works actually. The artistic appearance probably tricks people into thinking it tastes better than it actually does. It’s not bad (it’s water), but it’s also just a bit overly metallic.

The spring this water is sourced from comes from the source of a massive volcanic eruption that occurred over 5,000 years ago. As a result, it’s filtered through lava rock and is naturally alkaline. This gives it a more bitter taste, but that can be nullified if its consumed near freezing temperatures. That explains the Glacial tag.

According to Evian, their water undergoes a 15 year process before its ready to be drank. It starts out as snow in the French Alps, before melting and traveling through layers of glacial rocks. This filters the water and fills it with minerals and electrolytes. And boy can you taste those minerals. At least its not bitter.

You’ve probably seen this brand in a Starbucks. That would be because Ethos is Starbuck’s personal brand of bottled water. Considering that it’s from a coffee chain, it’s surprisingly good, and lacks any bitter taste.

Perfect Hydration’s “finest water possible” is purified through a nine-step process, also being enhanced with electrolytes and minerals. It’s a crisp taste, but as an alkaline water it has a slight bitter taste compared to most other brands.

Essentia certainly makes a lot of claims about their ionized water. They call it a “supercharged” alkaline water that has the bitter-tasting acidic ions removed. And it’s apparently impossible to get a precise reading of its pH level without a specific testing method. It’s still a crisp and clean tasting water, but Essentia tries a little bit too hard to make it sound better than it actually is.

This is a great water to take after a nice, solid workout. It has a little bit of flavoring from electrolytes and minerals added from reverse osmosis, but other than that it’s just good old water.

Mountain Valley’s a bit more n the sparkling side as far as water goes, but it’s a good water to help wash down dinner due to its slightly alkaline nature. The bubbles also aren’t that big of an issue for people that hate sparkling water for that reason.

This Nestlé brand is actually pretty good, originating from the Italian Alps. The mineral flavor is all natural , from limestone and volcanic rock. It’s then perked up with a little CO2 before being shipped around the world.

Another Italian water, this one coming directly from a natural spring. The non-carbonated water is clean, tastes clean, and has just a hint of mineral flavor.

Technically this isn’t a bottle, but it’s close enough. It’s strange to be drinking water out of a milk carton, but once you get past that hangup, you’ll realize that this water’s just clean and crisp. It’s just municipal water, but it uses an eight-step water purification process to make sure it’s ready to be drank. The lack of plastic is actually the real draw. The mostly paper cartons won’t affect the flavor of the water as much as a plastic bottle would.

Okay, La Croix isn’t as bad as you might think it is. It has softer bubbles than most similar sparking waters and it comes in a variety of flavors. It’ll take a while before you actually get tired of drinking this beverage.

This is basically the champagne of sparkling water. It comes from a natural spring in southern France. It’s touted as having more bubbles than other sparkling drinks, but it’s only for those that enjoy the mineral taste of spring water. Perrier water is actually naturally carbonated, but the water and carbon dioxide gas are captured separately. The CO2’s then added back into the water after its purified.

Did you know that this water actually is collected and bottled in Fiji? It’s actually another one of those waters naturally filtered through volcanic rock, and is rich in minerals and electrolytes to enhance the taste. The only real issue with this water is that the bottle doesn’t fit in any cup holders.

Smartwater is considered one of the top five brands in the United States, so it only makes sense that this brand makes the top five on this list. Smartwater is vapor-distilled, giving it a pure and smooth taste. And then there’s the extra electrolytes added for flavor.

The name makes it sound really pretentious, but it’s actually good. Voss has an interesting bottle and a crisp taste, with just enough minerals to give it some flavor. People just can’t get enough of this Norwegian brand.