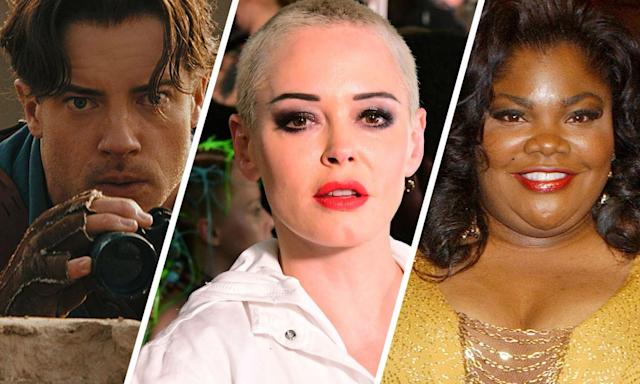 Brendan Fraser became a real big action star after his role in The Mummy franchise in the 2000s. But what made Fraser disappear from the acting scene was Phillip Bark. He accused the former president of the Hollywood Foreign Press Association of sexual assault. And almost immediately his number of acting opportunities dry up like water in the desert. Fortunately, in more recent years, Fraser’s career has had a little bit of a resurgence.

Rose McGowan was an alleged sexual assault victim of Hervey Weinstein around the time Scream was released. And when she began to speak out against him, she realized that she was having much fewer opportunities. According to McGowan herself, she had been threatened with being blacklisted if she spoke out.

You may be wondering what happened to Cousin Ed from National Lampoon’s Vacation. Well, while filming The Merry Wives of Windsor, Randy Quaid assaulted a member of the crew. Then his wife, Evi, got involved and sent inappropriate and threatening emails of herself to the cast and crew. As a result of all this, Quaid’s acting union, Equity, fired him. He was also fined $81,000 and banned from the union.

Feldman was once a child star, appearing in Lost Boys and The Goonies. However, he became an alleged victim of a Hollywood pedophilia ring and no one at the time took him seriously. He ended up turning to drugs to numb the pain, which effectively removed him from any acting roles. And thus, he ended up becoming blacklisted.

Dalton Trumbo was a member of the “Hollywood Ten”, people in the entertainment industry that refused to deny their involvement with the Communist Party. And then he was blacklisted… at first. He worked on the films Roman Holiday and The Brave One under a pseudonym, which ended up winning an Oscar. Word eventually got out about his involvement in these and other films, leading the Writers’ Guild og America to credit his name in all back-produced films.

Mo’nique won an Oscar for her role in Precious, but her involvement in that film is what ultimately led to her downfall. The actress, because she wasn’t being paid to appear, repeatedly refused to appear at press engagements for the movie. Lee Daniels, Precious’ director, revealed that she had been blacklisted due to her lack of commitment to the film.

Sondra Locke was known for her Best Supporting Actress Oscar nomination for The Heart is a Lonely Hunter. She had a 14-year relationship with Clint Eastwood that ended with them on poor terms. And that led to Locke being blacklisted by industry veterans. In a case settled out of court, Eastwood made a film development deal with Warner Bros. studios, but it turned out to only be a sham. None of pitches, which totaled over 30, were ever approved for a film.

Charlie Sheen used to be a huge Hollywood heavyweight. People just couldn’t get enough of him. But then everything came tumbling down. In 2011, he was checked into rehab for alcohol and drug abuse. Then he also had to deal with several domestic abuse claims. But what really got him blacklisted was when he publicly decried Chuck Lorre, the co-creator of the show he starred in, Two and a Half Men. Then he had the gall to ask for a raise.

A child star in Growing Pains and Like Father Like Son, everyone knows what kind of man Kirk Cameron grew into. Namely, he’s all about radical Christianity. It’s pretty obvious to see when he makes movies such as Kirk Cameron’s Saving Christmas. His inability to temper his religious and political views in the more liberal Hollywood caused him to effectively be blacklisted from mainstream film and television.

Roseanne Barr became a rather controversial figure in Hollywood after voicing her support for Donald Trump during his presidency. But she took things too far when she made racist jokes about Former Preseident Obama’s former Senior Advisor, Valerie Jarrett. The reboot of Roseanne was immediately canceled. The president of ABC even dismissed her by saying the tweet she had made was “abhorrent, repugnant and inconsistent with our values”.

Tippi Hedren was the star of Alfred Hitchcock’s Marnie and The Birds, but working on them wasn’t a fun experience. She accused Hitchcock of several sexual assaults throughout filming, and as she dismissed his advances he told cast and crew not to speak to her. He also had blocked Universal from being able to nominate her for any of her work on Marnie and generally just so that she couldn’t be hired for two years.

Isaiah Washington isn’t technically blacklisted from Hollywood, but his opportunities were suddenly cut to pieces. After calling one of his cast mates on Grey’s Anatomy a homophobic slur he was swiftly booted from the program. And to dig the hole deeper, he decided to use the word against when the show won a Golden Globe.

Mel Gibson used to be a powerhouse in the entertainment industry. But he’s gone on just too many rants to still hold the same amount of power. A car crash and some anti-Semitic rhetoric (and a rant) made him a rather controversial figure. He still directs from time to time, but it’s rare to see him in front of the camera anymore.

Cee-Lo Green reached the mainstream with his single, F**K You. This got him his own shown and a judge spot on The Voice. Although, he made some rather insensitive tweets on homosexuality and rape, and Hollywood didn’t take too kindly to that. His show was canceled, he was removed from The Voice, and he couldn’t even get anymore gigs as a musical performer.

Thora Birch was a cute child star, appearing in the fan-favorite Hocus Pocus. Although, what led to her career ending early wasn’t really her own doing. Her father physically threatened a co-star. And like that her career was over.

Jim Caviezel was once a Hollywood regular, but a lot of younger people may not know him by name. Well, there’s one role they may know him by: Jesus Christ. He portrayed the titular character in Mel Gibson’s (already off to a bad start) Passion of the Christ. Gibson actually warned Caviezel that he might get blacklisted by the Hollywood community. He took the role anyway and proved Gibson right.

Vince Vaughn used to be a powerhouse when it came to comedy films. Unfortunately, he wasn’t able to excel in films that didn’t rely on his comedic chops, and that came to bite him in the rear. It didn’t help that he voiced his belief that funs in schools would stop mass shootings. Rather than the pool of potential roles drying up for him, it more so just got absorbed into the ground a little bit over time.

Stacey Dash used to be a television superstar. But, like Kirk Cameron, Dash couldn’t keep her conservative views to herself. She shared some questionable comments about the transgender community. She had even suggested that Black History Month should end.

Another Grey’s Anatomy star, Katherine Heigl used to be riding high in Hollywood. But then people started finding out that she was hard to work with. And not just a little bit of nuisance either. She locked herself in her trailer over creative differences, demanded outrageous wardrobe substitutions, and questioned script decisions.

Justin Bieber’s calmed down in the last few years, but that doesn’t quite excuse his behavior in the past. He’s had several high-speed run-ins with law enforcement, then made things worse for himself by resisting arrest. While he remains a successful musician and recording artist, his life choices have mostly barred him from continuing an acting career.

Dorothy Parker was an unforgettable writer in the midst of her career, active primarily in the 1930s and 1940s. She was behind some pieces like Saboteur, Trade Winds, Suzy, and A Star is Born. Unfortunately, after World War II ended, she was labeled a communist. And if we’ve learned anything from Dalton Trumbo, that gets you blacklisted real fast.

Martin Lawrence is a Bad Boy in more ways than one. After being invited to host Saturday Night Live in 1994, he altered his monologue and ended up discussing female hygiene. As a result, his opening was removed and he was banned from the show. Yet, even today, he still makes homophobic comments.

During the Red Scare, Lena Horne was another Hollywood star accused of being a Communist. Of course, she actually disavowed communism in order to regain her spotlight in 1969’s Death of a Gunfighter.

Natalie Maines didn’t exactly help her career by criticizing George W. Bush on his invasion of Iraq in 2003. She apologized afterwards, but then rescinded the apology in 2006. Her band, the Dixie Chicks, ended up blacklisted by many radio stations, but they’ve since recovered.

Josephine Baker was a naturalized French actress and the first Black woman to lead a major motion picture. But after criticizing a reputable columnist in 1951, she was accused of being, of course, a Communist sympathizer. Her US Work Visa ended up getting canceled and she was deported to France. She had to wait ten years before she could return to the United States.