Best Starting Quarterbacks In The NFL (2023) 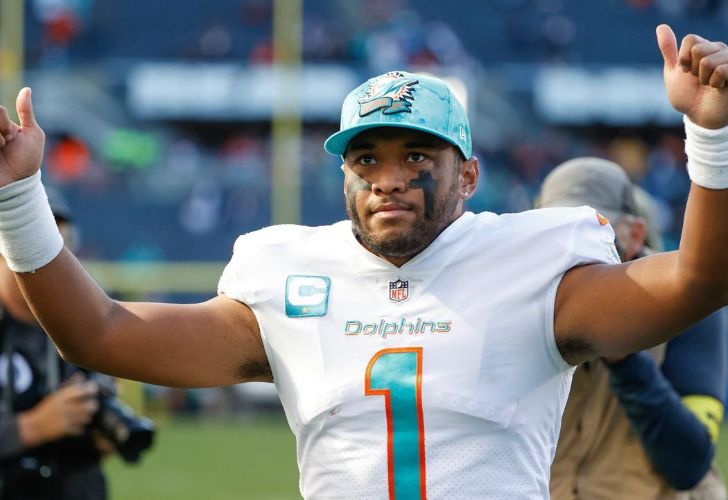 The cornerstone to any football team is the one that starts every play, the quarterback. A football team cannot function without them. Which is probably why having a good one is so important to every NFL team. Let’s take a look at this year’s lineup of starting quarterbacks. Let’s see which of them are the best and which ones are the worst.

Zach Wilson has a surprisingly good system to work in as a QB with the Jets. They upgraded his offensive line, wide receivers, and tight ends, giving him greater defense each play as well as superior targets. For his second year in the NFL, he can start to develop into a dynamic playmaker.

Davis Mills ended up being the starting quarterback last season because of the drama surrounding Deshaun Watson. He had a good arm, but was still erratic and inefficient. And he didn’t have much support power either. The Texans think he could help save their franchise, but others don’t quite think that’ll be the case.

During his final season in Atlanta, Matt Ryan wasn’t quite at the same level he was in 2016 that earned him MVP status. His arm strength declined and his efficiency was lower. Fortunately, he got a welcome change when he ended up with the Colts. And the team’s thrilled to have him raise their new receivers. He might be ready for a big rebound.

Taylor Heinicke’s replaced Carson Wentz as the Commanders’ starting quarterback, at least for now. And while not terrible, he is a notable downgrade in comparison to his predecessor. He still has a few good targets for the team’s passing game, however, which helps make up for any of his weaknesses.

The Brown’s offense really seemed to plummet after Deshaun Watson took over the QB position. Its understandable, considering how he was off the field for two years, but he was really struggling with his wideouts. Only 58.2 percent of his passes were completed. It might be the time for them to move on to a new quarterback.

Russell Wilson will be playing outside of Seattle for the first time in his entire career. He’s proven to be incredibly consistent in his career, even after his first true injury. It may take a little time for him to get used to the Broncos, but he’ll be bringing his all-around skill to the team.

Jones was rewarded for his actions last season, being given the starting quarterback position. However, he hasn’t exactly been living up to Bellichek’s standards lately. Or more accurately he’s been having trouble remaining healthy. Replacements have been needing to pick up his slack after ankle injuries. Bailey Zappe even had to replace him mid-game at one point.

Marcus Mariota is hoping for a rebound. He’s starting fresh with the Falcons after being replaced in Tennessee by Tennehill. He put in some good work during his two seasons in Las Vegas and has good history with Arthur Smith. However, he still feels more like a bridge for the rookie Desmond Ridder.

There’s not much to say about Sam Darnold as the Panthers’ new starting quarterback. People are hoping he’ll do well, but they aren’t holding their breath. As stated before, the offense in the Carolinas didn’t inspire much confidence.

Matthew Stafford had one of the more troubling seasons in the league, especially coming off of a Super Bowl win. The Rams had a broken operation from the start, with Stafford constantly being left open to absorb waves of punishment from the opposing teams. Its possible he won’t stay with the Rams for much longer.

Jameis Winston was considered the Comeback Player of the Year. But now another injury’s forced him off the field in the meantime, in this case being an injured back. Fortunately, Andy Dalton’s been holding things together pretty well in Winston’s absence.

Despite offensive skill injuries and line shakiness, Derek Carr’s proven to have had two great seasons, back-to-back. He’ll likely feel rejuvenated, playing with Davante Adams, as well as having a few other good weapons. He’ll have a more dynamic team under their new coach, Josh Daniels.

Kenny Pickett has officially replaced Mitch Trubisky as the Steelers’ starting quarterback. He has unwavering pocket confidence that seems as though it will lead to more picks. However, there is still more to like about his ball placement on the field. He also seems to have good general awareness and tough running.

At age 34, it’s looking like Ryan Tannehill may be about to get phased out. He was an ideal passer with a good arm and athleticism in the past. He even proved to be capable of some good running on his own. However, he lost his way last season. It seems as though he’s hit his ceiling.

So far Jones has been proving to be an underrated asset for the Giants. While he’s been doing rather well, he’s also still prone to injury. A bad ankle took her out a little while back and even his backup Tyrod Taylor ended up getting concussed. This forced the third string quarterback, Davis Webb, to have to take over.

Kirk Cousins actually has some of the best receiving corps in the NFL. Helmed by Justin Jefferson, they really help out when it comes to Cousins’ throwing arm and overall efficiency. However, despite his own skill and support system, he still only ranks in the middle as far as starting QBs go.

Murray’s worked on being more pass-efficient and less run-dependent. The results have been mixed, but he’s still proven to be one of the most dangerous all-around QBs in the NFL. He has a confident mind-set that helps motivate him. However, without DeAndre Hopkins as a target, his stats took a bit of a hit last season. Hopefully he’ll be able to make up for it this year.

It looks as though Brock Purdy will be the future of the 49ers franchise. Jimmy Garoppolo had more starts last season, but Purdy became a top ranked passer after taking over in just Week 14. And as a result, the 49ers led the league in points per game, yards per attempts, and yards per play. Not to mention, he has an excellent passer rating. It looks as though he’ll continue to thrive in the years to come.

Aaron Rodgers is turning 39 soon and is proving to be super-efficient after wining the NFL MVP award two years in a row. He’s settled into Matt LaFleur’s RPO offense too. He’s got an adjustment to make without Davante Adams and a more mixed receiving corps, but he’ll likely still be an elite player.

Justin Fields had a rough first season, but that’s changing quickly with his new play-caller, Luke Gentry. He brings a lot of helpful RPO concepts. Fields will hopefully have more of an opportunity to put his good arm and athleticism to good use. Being given more freedom to run will also help him with his passing growth.

Lamar Jackson took a few bad hits last season and ended up missing five games. Although, the worry isn’t about Jackson, himself, but more so his receivers and offensive line. They made sure to change up his receivers to better suit Jackson, and he looks a lot healthier than he was in the previous season. He should be playing like the MVP he was back in 2019 again.

Tom Brady has at least one more season left in him to chase after a final Super Bowl ring. The Buccaneers have some particularly strong weapons for Brady to take advantage of in Bruce Adrians, Rob Gronkowski, and Antonio Brown. There really hasn’t been a quarterback that shows how skilled he truly is better than Brady, even though he’s in his 40s.

Dak Prescott was given one of the biggest raises in NFL history at one point. The Cowboys really seem to want to hold onto him, but his health seems to be somewhat waning. Injuries forced him to be temporarily replaced by Cooper Rush. And while he hasn’t displayed the same physical talents as Prescott, he seems to have a certain technical skill that may make him a good replacement.

Initially, everyone thought that Drew Lock would be the starting quarterback for the Seahawks. But he just couldn’t beat out Smith for the starting position. Despite his previous resume, Smith’s been showing that he’s an efficient and dynamic player. Among the active starters, the only other quarterback that’s actually averaged more yards per attempt this year is Jalen Hurts.

Jared Goff was probably a bit surprised to find himself moved from the Super Bowl champion-bound Rams to the Lions. He replaced Stafford and hasn’t proven to be much different of a QB than McVay. However, the ceiling for play on the team wasn’t that high when it comes to QBs. And despite his supporting cast and targets, he hasn’t proven himself above average with his passes.

It’s impressive how skilled Tagovailoa has become in comparison to the other starters. He was previously falling behind his fellow draft mates, which made him seem like he wasn’t the Dolphins’ man anymore. But he’s been improving overall. However, Teddy Bridgewater proved himself as a potential successor, so Tagovailoa needs to keep things up to stay in the game.

It’s not really even Trevor Lawrence’s fault for the level of play the Jaguars displayed in his rookie season. The coaching staff was dysfunctional and had a lot of questionable offensive strategies. Doug Pederson and Press Taylor can hopefully get him back on track to turn him into an impressive physical weapon. More completions and a dedication to running game would help Lawrence out greatly.

Justin Herbert’s first two years as a quarterback catapulted him to the highest-ranking quarterbacks in the NFL. He’s accurate, aggressive when he needs to be, and has a perfect combination of size and athleticism. He has a good chance of winning his first MVP award.

Josh Allen might not have had the most efficient passing numbers last season, but that’s probably about to change. Just looking at him play shows he’s become the greatest all-around force in the NFL right now. He’s still putting some things together, but it’s looking like there’s a good chance for him to be the NFL’s next MVP.

People barely even remember that Joe Burrow had a torn ACL his first year. He’s demonstrated a strong downfield passing game. Additionally, he’s showed the top-flight arm, accuracy, and toughness that made him a top draft pick in the first place.

Hurts still has plenty of room to improve as a QB. And if he does, and hopefully soon, he’ll have enough goodwill to become the Eagles’ next franchise QB. Philadelphia needs to get back to opening up the passing game with their new wideout, A.J. Brown. Especially after leaning heavily on running plays last season. And Hurts’ big year last season was what helped lead them to the playoffs.

Patrick Mahomes’ production and performance has been superior to a vast majority of his contemporaries. He has to adjust to passing without Tyreek Hill as a target, as well as new coaches, but he’s still in the prime of his life. He can carry the Chiefs’ offense in a different way.