Awkward Family Photos That Will Make You Cringe 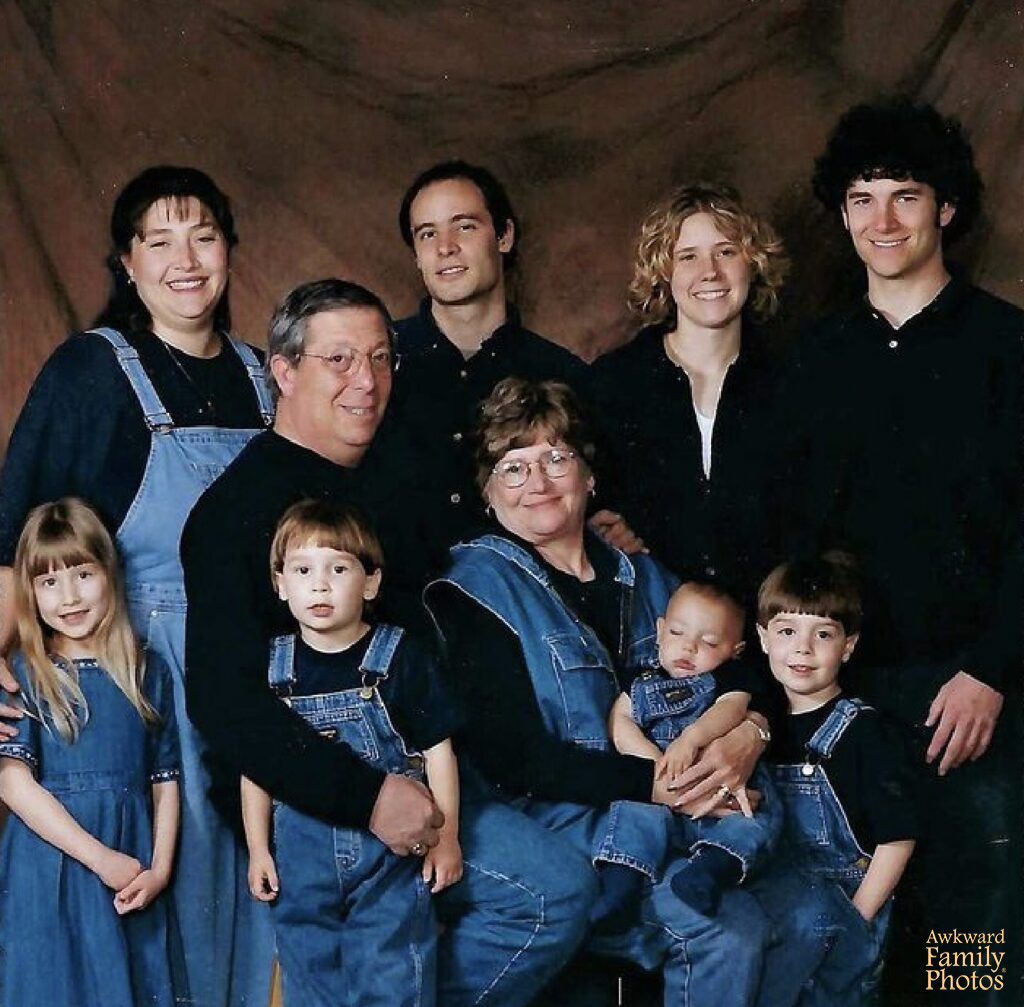 It happens at every family gathering. Everyone’s having a fun time, then all the cousins groan as one of the aunts or uncles says the fateful words: “let’s take a picture!” It can be annoying to drop everything to take a photo, especially if it takes a lot of tries to get the right shot. But, at least most of the time the photo might turn out decent. These families weren’t quite so lucky. Here are some of the most awkward, yet hilarious, family photos.

These kids have to have started crying the second the photo was taken. Why else would you you want a photo of three crying children holding the letters for “JOY”? The irony of it all?

Okay, the background here makes sense. But what’s up with the plungers? Are they supposed to be extra flowers or something?

A Gloomy Day At The Beach

Seems as though one of the kids was going through a phase. Regardless, they’re certainly not dressed for the beach. They must stick out like a sore thumb. And they probably can’t handle the heat that well.

These three must really think they’re cool. After all, they put it on a license plate and pointed at it in this photo. Can’t say it held up particularly well though.

This is an incredibly bizarre photo to take, especially with your baby. It makes you wonder whose idea was it in the first place. And what’s up with the rest of the family for going along with it?

There’s children resembling their parents, but this is just ridiculous. The child in this photo looks like a younger clone of their mother. It’s almost creepy. Doesn’t help that neither of them are smiling.

The Girl In The Window

Is that one of the kids or is that a ghost? It certainly seems like that’s why the child is just staring out the window. Either that or she might be a doll.

This image looks like it was either photoshopped or green-screened. But even making the photo appear as though you’re traveling through the cosmos, it doesn’t distract you from how little fun the cat’s having.

The leather Mrs. Claus outfit the woman’s wearing in this photo may not have the desired effect for this photo. Why the men in the picture aren’t wearing any Christmas paraphernalia at all is also just confusing.

Well, they enough family members to make a full rainbow. The question is really just why they thought this was a good idea. At least they look like they had fun with the photoshoot.

Either the woman’s overdressed or the kids are underdressed. Both seem equally as likely. And what’s up with that strap she’s wearing?

These gentlemen seem to be having a nice wine and fondu party with their cat. At least one of them is smiling. Doesn’t make this photo any less cringeworthy though.

Were they snarling like this before they took the picture? Either the dogs really don’t like each other or they absolutely loath the man in the middle.

In comparison to the last photo, this one isn’t staged. But that just makes it even more cringeworthy. How’d that kid even grow enough hair to style it into a mullet?

These haircuts actually do look like they were photoshopped. Although, it’d be equally as unsurprising for it to be real. Certainly wouldn’t be a photo you’d want to share with other people.

A Woman And Her Kid

This photo has the same aesthetic as that movie Midsommer. The pregnancy and goat doesn’t help with that culty vibe.

How’d he convince his wife to take this photo? She must have a great sense of humor, cause this photo just does not spark joy.

It’s probably just an optical illusion, but the girl’s head in this photo just looks off. She might look fine at first, at least until you look at her feet.

Cringy photos aren’t a modern creation, they’ve been around since the camera was first invented. The person in this photo doesn’t even want to be in it, they’re making sure their face isn’t in the shot.

All four family members seem to be enjoying themselves. Well, except the mother. It seems as though something shocked her at the last second. What could have surprised her?

This photo is actually staged. It was intended to make fun of the old family portrait style. However, making a mockery of that style doesn’t make this photo any less cringeworthy.

A family wanting to take a family photo is one thing. Even doing that with everyone in pure denim is another thing. But this particular pose… that’s what makes this cringeworthy.

The concept was probably to have a photo of a father looking over his family. But what we ended up with was a horror movie poster.

This photo was almost normal. It could’ve been normal. But someone had to just let the kid wear his scary pilgrim costume in it. It would’ve been a nice family portrait otherwise.

Based off of the look on this baby’s face, they were either reacting to the camera equipment or their parents. Regardless of the reason, they are not comfortable in this situation at all.

What an interesting photo with these parents and their children… wait a minute. It’s strange enough that this couple had all these monkeys, but they even managed to somehow get them in all of these outfits. Wonder how that went down.

A Little Choked Up

This one’s about as awkward as it is frightening. This young man seemed to have moved his hands from the woman’s shoulders to her neck, ominously staring blankly into the camera. At least one other person noticed this was going on.

It’s All In The Hair

The pant suits are one thing, but here, it’s all in the hair. The child and mother have especially old-fashioned and massive hairstyles. It looks all the more noticeable in comparison to the dad who’s bald.

It looks like someone decided to go as a family to a Renaissance Fair. Although the father really went the extra mile with his costume. His centaur half looks very realistic. Too bad the daughter seems to not be enjoying herself.

The fact that they’re all redheads is fun enough, but looks like they all wanted to wear the same outfits for this photo as well. Not that there’s anything wrong with that, but the outfits aren’t exactly flattering. And it looks like the father recognized that too.

This seems like it’s just an ordinary family photo, just having a good time. Oh wait, but there’s also a crazy axe-wielding clown in the background. Hopefully it’s someone they know.

This one’s a lot more wholesome than a lot of the other awkward-looking photos. The group’s all clad in Snuggies, with a mild holiday season color theme to boot. It’s kind of cute, even if they do all look silly.

Well, the kids don’t really seem to be enjoying taking this photo. It might have something to do with a cat allergy. Otherwise, the kittens may just not be enjoying their time in the kids’ pockets.

The monkeys and kittens were bizarre, but at least everyone looks like they want to be in this photo. Or, at the very least, the rabbits aren’t trying to escape. They are very cute though.

In this family, everyone smokes! Not exactly the best habit for children to have. And that one kid seems to be enjoying it just a little too much.