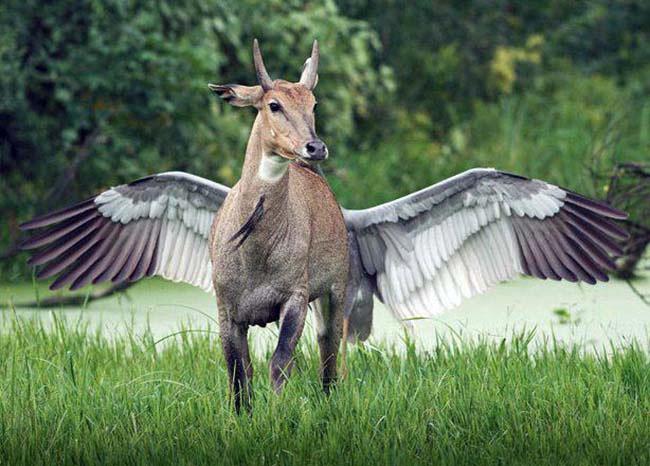 Photography is an interesting art form. People can stage thing to make them look more lovely or just even more bizarre. But sometimes, there are photos that are one in a million. That’s to say that you can only take these photos with perfect timing that you could never even plan for. Let’s take a look at some of that amazing photos.

This ship hit a pretty bad wave or something while it was cruising along. The tilt almost caused all of the cargo to fall off. And that would’ve been very unfortunate.

Looks like someone was a little late on the ejector seat there. The jet may have crashed, but at least the pilot got out.

You may not see it immediately, after all, gators are stealthy creatures. That’s the reason this woman didn’t see the gator. Don’t worry, both the woman and the gator were unharmed following this encounter.

Sucked In By The Whale Shark

This would really be a scary sight. The whale shark is the largest fish in the ocean, and they have a rather intimidating presence. Fortunately, they’re big softies. They only actually eat plankton and other tiny creatures.

This man really got some hang time after being thrown from his race car. While the crash may have been scary, the trip back down was probably just as bad.

Speaking of car wrecks, here’s another close call. The car literally crashed right beside someone.

A Fear Of Clowns

A fear of clowns is called caulrophobia. Let’s hope that the man from the bakery with all the trays doesn’t have that.

Right Into The Boat

This person probably thought that they could do a cool trick with their bike. Maybe they thought they could jump the river or something. Well, instead, they’re going face first into that canoe.

There’s a wandering eye and then there’s this. Rubberneck all you want, just make sure you don’t walk headfirst into a pole.

“I feel like I’m flying!” Well, the bird actually was flying, and apparently you did something to bother it. Just goes to show you how reenacting movie scenes is a bad idea.

Shark In The Waves

Surfing’s pretty difficult to get the hang of. Trying to avoid a shark while learning probably isn’t the best situation to be in, even on a smaller wave.

Going out in the middle of a bay or lake may not be as good an idea as you’d expect. This humpback whale’s beach is well as way to splintering the pair’s boat.

Camels seem a lot less volatile than they actually are. This woman learned this first hand when this one gave her a nasty bite on the side of the head.

The cat seemed to jump or pounce at just the right moment where you couldn’t see its legs. Now it’s a just a ball of fluff headed towards the camera.

It’s pretty hard to get an image of a bee in the middle of losing its stinger. Unfortunately for bees, their stingers aren’t designed to pierce human skin and the removal of their stinger spells their doom.

This girl clearly wasn’t prepared for the ball straight to her face, given how there was barely a reaction even as the ball leaves an imprint on her face.

Taken Out Of The Game

Everyone in this image is clearly moving to avoid the bat. Unfortunately, one man was unable to react in time. And he was smacked right across the face.

Cougar In The Shadows

It looks like this hunter is about to lose his catch. Either that or him and this cougar are going to have a fun time together.

Creating a bird feeder sounds nice on paper, but then you have situations like this. Birds can be territorial too ya know.

This skydiver was really falling with style. Perfectly positioned to appear to be standing on the clouds.

First a jet, then a car, now we’ve got someone getting ejected from a horse. Looks like their grip on the reigns wasn’t strong enough.

Right Into The Eye

People that are more familiar with firearms are aware of recoil. Standing up with this scope right to their eye is frankly, a recipe for disaster.

Going snorkling can be really fun, so much so you’ll need to take a photo of it. Depending on the amount of fish around though, you’ll probably be photobombed.

Looks like this person should’ve stopped in for a pit stop during the race they were in. Or they should’ve just gotten a better bike.

You can’t really even fully fault this man for the soon to be broken vase in this image. The one he was taking a picture of was in a glass case, so why wasn’t the other one? Not to mention, if this was a possibility, why would you leave things open enough that people could walk right up to the art?

Most of the time, people think of crocodiles and alligators as apex predators. Well, looks like the eagle didn’t agree in this case.

What kind of fluid this is isn’t clear, but whatever it is, this person got drenched in it. Hopefully they’re having fun as opposed to being attacked.

Spearfishing isn’t a particularly easy thing to do. Just look at this man, who actually missed the fish. However, catching him in midair like that as his stick punches through the surface of the water, it looks incredible.

Popping bubbles is always fun. They always pop so fast though, gone in an instant. But if you slow things down, you can see what the bubble looks like as it collapses.

Happy Faces In The Sky

It’s funny enough that the birds were flying in a happy face, but the sun too? That cloud has a great sense of comedic timing.

If it wasn’t for the rim of this mirror, you might actually think this girl was invisible. It’s a pretty amazing photo overall though. Even more impressive is that the cameraman isn’t in the mirror’s reflection.

This photo was taken at the London 2012 Olympics. The Olympic Rings had been hanging on London Bridge, and it just so happened that, during the games, a Harvest Moon had appeared, transforming itself into the sixth Olympic Ring.

Man, this dog has some pretty big antlers. Well, it’s actually an optical illusion. That’s just a gnarly tree behind it. Even so, it still gives off the energy of Max from How the Grinch Stole Christmas.

Hello From Your Friend Ray

Somebody must’ve heard about what happened to Steve Irwin. Either that or they just feel weird. Sting rays are mostly harmless, even their stings are unlikely to cause permanent damage. However, in this case, if the top of the head of the man behind the sting ray is any indication, the sting ray didn’t jump on these women of its own volition.

Within The Palm Of Your Hands

You’ve probably heard about holding the world in the palm of your hands, but what about the sun? It looks like former president Barack Obama had his hands in just the right spot while giving this speech.

Waterfalls are truly a sight to behold. And making one yourself with a water bottle would certainly be spectacular. At best though, it makes for a wonderful photo opportunity.