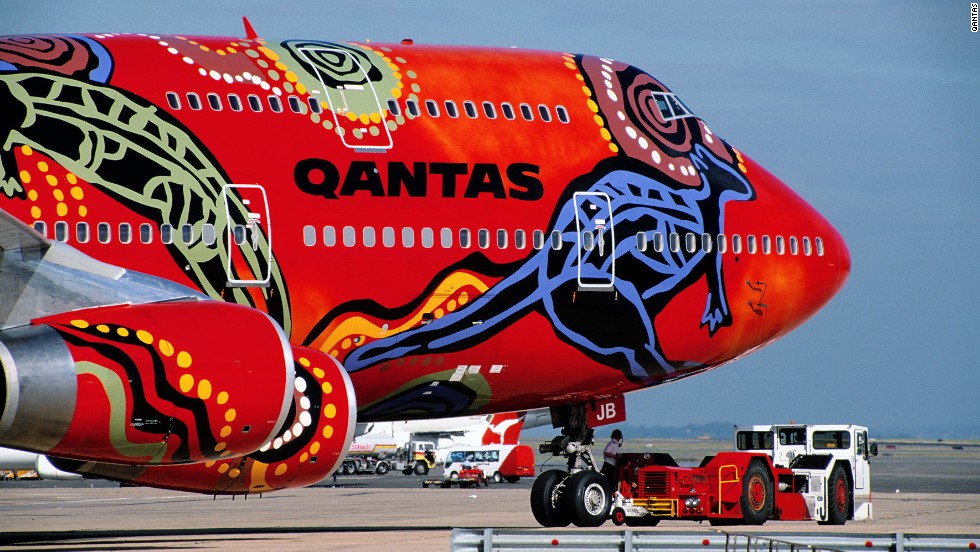 When you take a trip, ordinarily you hop on a plane with the same, basic ordinary paint job. Well, what if you saw one of these pull up through the window instead. They don’t fly any differently, but boy do they have personality! Here are some aircrafts with the most ridiculous and cool paint jobs around.

This plane looks like it’s going so fast it’s going into the digital realm. It’s a Russian jet that’s even been referred to as “digital camo”.

This plane’s design looks incredibly sleek. It’s not incredibly interesting or bombastic like some of the other paint jobs on this list, but it does have a certain cool factor.

Behold the duck-billed plane. It’s a little strange that it’s patterned like a clownfish, but that doesn’t make the paint job any less interesting. Nice job Nokair.

This small jet is pretty flamboyant. But that really just makes you have to admire it more. How long does it take to paint a plane? Now how difficult would it be to paint it with all these rainbow patterns with clear segments.

Pepsi has a tendency to make a lot of strange advertisements (ever heard of Pepsiman?). Comparatively speaking, this isn’t the craziest thing they’ve done. But you do have to admire the commitment and paint job.

Jaws Of The Beast

Someone did an excellent job with this paint job. Really looks like the jaws of a shark, and has actually depth to it too. Looks like you could crawl right into the mouth. Not to mention, the area on the side looks like gills. This was supposed to be a shark after all.

Things may have started out festive, but quickly took a left turn with this one. Santa should really get a radio or something to help him communicate with planes. We don’t want situations like this happening again. How else will the children of the world get their gifts.

After Santa got his sleigh destroyed in that freak accident, he needed a new sleigh. Fortunately, or unfortunately depending on your perspective, the only thing available was this fighter jet. It’s probably a bit faster, but might have more trouble landing on rooftops.

Some people get leopard print clothes. Someone decided to paint the leopard’s head on the nose of their plane. It look incredible, but also a little bit more adorable than a big cat would be expected to look.

This plane just seems like a really cool guy. Painting on the mouth was one thing, but the 3D cigar really takes the cake. The artist really put in the work on this one.

That may be the biggest battery of all time. It’s an interesting advertisement. It’s hard to imagine that a plane could run off of batteries from Duracell. Although, if it could, that’d be a real glowing endorsement for the company.

The steampunk aesthetic is always interesting to see, but it’s rarely ever seen on aircraft. It’s a small craft, yes, but the painter put a lot of effort into making this thing look legit.

Eye Of The Tiger

Imagine being in a dogfight, and this jet banks, allowing you to see the top of it. The white tiger paint job will only be a momentary distraction before you look into those eyes. The eye of the tiger. You’d be shaken in your boots and probably retreat at the soonest opportunity.

Not a plane, but a helicopter is an aircraft. The paint job must have not just taken a while but looks a lot like an actual bird of prey. Maybe it can hover as fast as one too.

This isn’t the only fighter jet painted like this. It has a stylized maple leaf on its top and is painted cherry red. This is some hardcore patriotism.

How fitting that the call sign of one of the new characters in Top Gun: Maverick is Rooster. Roosters may not be able to fly normally, but this one certainly can.

There are plenty of bird and big cat paint jobs on aircrafts, but what about snakes? The black mamba in particular is one of the most venomous snakes in the world. They’re probably more dangerous than any of those other beasts.

Salmon Swimming In The Sky

A salmon can swim upstream and up waterfalls. Why shouldn’t one be able to swim in the sky as well? Swim in the sky, all the way to Alaska! It is an Alaskan plane.

The paint job on this cargo plane is rather restrained. There aren’t any gaudy animals or patriot flags painted on the vehicle. There’s just a small, high-quality painting of Mater from the Cars franchise’s face placed on the nose.

Under The Turtle Shell

Airbus decided to give this plane an interesting paint job. It’s that of a turtle with two of its babies. It’s cute, and nothing makes you feel safer than hiding beneath a turtle’s shell.

You probably don’t think of the Greek’s air force that often. The most dominant religion there is Christianity and it really shows. This jet as a painting of Saint Michael on its undercarriage.

From A Galaxy Far, Far Away

R2-D2, C-3PO, and BB-8. The most iconic droids from the Star Wars franchise. And here they are in plane form. Whoever wanted them painted like this is a big fan of those movies. And whoever got this photo taken was an even bigger fan.

You gotta be safe. Just because restrictions in airports have been lessened, doesn’t mean you shouldn’t be wearing a mask anymore. When even the plane’s wearing a mask, that’s gotta mean something.

We’re going to Disneyland! Let Tinkerbell lead the way to on of the happiest places on Earth! This plane was painted to celebrate and promote the 50th anniversary of Disneyland.