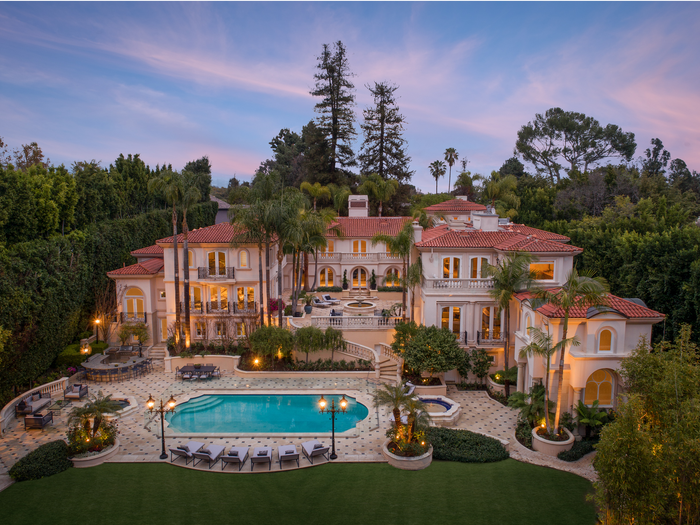 Home is where the heart is, and it appears that some celebrities must have incredibly large hearts. Either that, or they just really like having extravagant houses. These are some of the largest and most stunning homes, currently owned by celebrities.

Tom Cruise’s house in Telluride is listed at $59 million. And it certainly looks like it’s worth every penny. The action star’s house isn’t just large, but it also includes a pool and tennis court on the premises.

Celine Dion sold this house for $28 million in 2017. She may not own it now, but she must have had a great time in the house while she lived there. It’s almost like a water park with two pools, a lazy river, two water slides, and water cannons. It 500,000 gallons of water to operate! And that’s just the outside. The interior had 13 bedrooms and 14 bathrooms.

Justin Bieber doesn’t own this house, but he rents it to throw lavish parties. It looks a bit like an office building from the outside, but the glass structure is entirely residential. And, of course, it has a pool for cooling off on especially warm days.

Taylor Swift’s owned a few different houses since becoming famous, but this mansion is the definitely the best. It has several decks to take in the ocean view. And the bright white facade looks rather elegant against the Rhode Island water.

Madonna was actually the last person to own Leonardo DiCaprio’s house. So, it’s unexpectedly fancy and lavish. The purchase cost him $1.8 million. It’s only one story, but includes a pool, ample parking space, and a full basketball court outside.

One of the most successful rappers of all time of course has a house matching his worth. His mansion has 21 bedroom, 25 bathrooms, and a pool/hot-tub combo. Not to mention, it has its own recording studio, a full night club, and a lake!

When your combined net worth is over $1.8 billion, it’s completely expected they’d be able to afford a lavish house such as this one. It features a helipad, 12-person whirlpool, 15 car garage, and a fitness center. And for added security, the windows are bulletproof.

It seems as though the most amazing part of this house is its pool. It looks like a hidden grotto, or some kind of lake. It was actually built to rival, and potentially surpass, the one in the Playboy Mansion.

Selling his Beats line of headphones made Dr. Dre the highest paid rapper of all time. Then, he bought Tom Brady’s house for $40 million. It’s 20,000 square feet and has a rather impressive infinity pool.

Sofia Vergara bounty this house in 2014 for $10.6 million. The pool and spa area looks amazing, and the exterior is just beautiful. With 11,000 square feet, it also has plenty of room for seven bedrooms, 11 bathrooms, a sauna, and a wine cellar. And then the master suite has massive closets and a balcony.

Pharrell Williams hangs up his hats in a more modern home. His property not only includes a five-bedroom house, but a two-bedroom guest house as well. And being made of glass gives you an incredible view from the top of the hill, no matter where you are on the inside.

The property seems to go on forever. It’s 150 acres after all, and who else but Will Smith would buy it. It cost $42 million and is located in Calabasas, a fair bit away from the hustle and bustle of LA. The house was custom designed by the Smith family, featuring a pool, basketball and tennis court, an entire lake, and a built-in trampoline. Inside there are nine bedrooms, a recording studio, a Moroccan-themed home theater, and a meditation lounge.

Speaking of the Fresh Prince, Jennifer Aniston spent $21 million getting this house in Bel-Air, shortly after marrying Justin Theroux. Unfortunately, Theroux and Aniston began having marital issues. Fortunately for them, the house was big enough for them to divide it in half. Jennifer got a massive walk-in closet on her side and Justin got his own chicken coop with 40 hens.

Yes, critically acclaimed funny man Jerry Seinfeld owns a mansion. He has quite a few homes, but this one seems to be his favorite. It cost him $32 million and he bought from Billy Joel of all people. It’s 12 acres and includes a pool, barn guest house, and a baseball diamond. And then there’s the most important part, to Jerry that is, the 22-car garage.

Tiger Woods’ home in Jupiter Island, Florida isn’t as big as a gold course, but its layout and contours allow him to practice no problem. He can practice just about any gold shot under 150 yards. Forgetting about the gold stuff for a moment, his house also has two master bedrooms, several pools, a tennis court, an oxygen therapy room, and an elevator.

Outside of the size, this photo of Ellen Degeneres compound may not be that flattering. Well, that’s because this was when it was still under construction. Ellen spent $49 million to have a home built in the same enclave as Prince Harry and Meghan Markle.

The stunning part of Dr. Phil’s residence isn’t exactly the size or anything particularly lavish. It’s how artistic the interior is. There’s so much artwork, in both painting and sculptures, his own son has actually called it an “artsy house of horrors”.

In 2017, Katy Perry paid nearly $19 million for a secluded home in Beverly Hills. It has five bedrooms, three fireplaces, a double-edged infinity pool, and a beautiful patio. While it may not be as large as some of the other properties on this list, it’s certainly one of the most visually stunning. That pure white really does something for it.

Yes, John Travolta’s house doubles as an airport. He’s a well-known aviation enthusiast, so of course his house is built to taxi planes. There’s also a pool and other nice things, but they’re really overshadowed by the airport terminals.

Naomi Campbell’s house may be one of the smallest on this list, but it still one of the most interesting here. It’s even got a name, the Egyptian Eye of Horus. It’s located on an island just off the coast of Turkey and has 25 bedrooms and five lounges. It’s also designed to be self-maintaining, with natural light shining into it.

P. Diddy’s European-style villa in Holmby Hills costs $40 million. It’s got 11 bedrooms and eight bathrooms, on top of an underwater tunnel that leads to the pool and grotto. And let’s not forget about the separate building for the spa. It has it’s own steam room, beauty salon, and massage room. And back in the main house there’s a wine cellar and movie theater that seats 35 people.

Adele’s got a lovely home in England, but she also has a rather impressive one in Beverly Hills. It’s more modest than other mansions on the list with only four bedrooms and six bathrooms. But behind the gated entrance is a lovely pool, a spa, and a gazebo. And inside the house is a two-story foyer, a library, and, expectedly, a grand piano.

Steve Harvey’s come a long way from his early days as a gig comedian. And this is what allows him to afford one of the nicest and largest mansions there is. It’s 35,000 square feet and has a price tag of $15 million. It has 7 bedrooms, 9 and half bathrooms, a 77,000-gallon infinity pool, a full-sized movie theater, and a full tennis court.

Lady Gaga’s been living in this mansion since she really started raking in the dough with her music career. This Malibu, Mediterranean-style mansion costs $23 million. On the exterior, there are gorgeous patios and courtyards and a saltwater pool. The inside boasts hardwood floors, antique fireplaces, high ceiling, a great entertainment center, and a bowling alley.

It’s not a direct one-to-one, but something about Oprah’s home just reminds you of the White House. It only fits that she has a home as regal as she is though. Supposedly, it has a price tag of $52 million. And that’s without factoring in the guest house, which by itself covers 23,000 square feet of space.