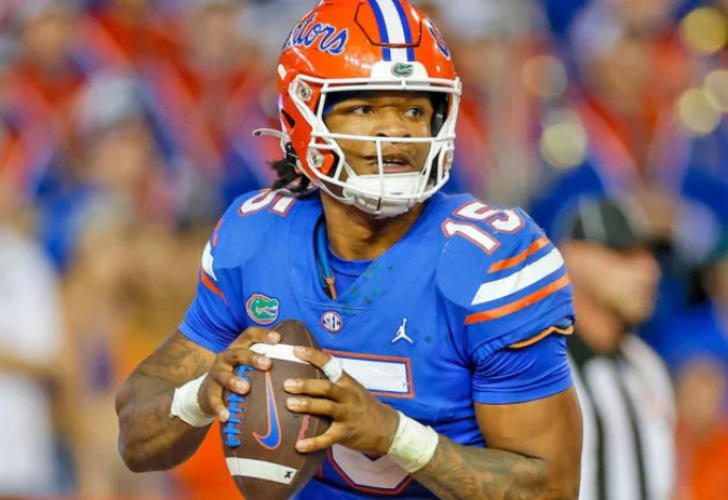 The 2022 season was full of upsets, rage, disappointment, and excitement. But, with things coming to a close, its time to look ahead. Even before the Super Bowl, people had already begun to make predictions on what the next season will be like. And that includes one of the most important pre-season events: the draft. Here’s what the 2023 NFL Draft may look like, starting at the end and working our way back up to who the coveted, No. 1 draft pick might be.

Darius Slay and James Bradberry have been an amazing duo for the Eagles. But they’re both going to be over 30 in the 2023 season, so the team may have to replace one soon. Clark Phillips III isn’t the larger player on the field, but he has a lot of potential in the slot corner.

The Chiefs could use another strong receiver. And Jalin Hyatt’s been having a great time at Tennessee. He’s had a stellar season making plenty of big plays.

Jordan Addison has an excellent mix of field-stretching speed and after-the-catch quickness. He could quickly develop into the go-to guy for the Bills. Josh Allen could use another weapon after all.

Russell Wilson needs the best chance possible next season to give the Broncos, themselves, a chance. And that’s where Luke Wypler comes in. He’s an athletic center that’s played football since high school. He also has some experience as a tackle.

The Bengals were interested in Trey McBride in last year’s draft, so it’s possible they’ll go for a tight end this year. Michael Mayer’s proven to have high production over the middle of the field and is an absolute unit.

Originally, it seemed as thought the Cowboys would draft Leighton Vander Esch, but dropped him from their board due to concerns about his neck. They were actually proven correct in their concerns. However, the Cowboys still need a new linebacker. And that’s where Jack Campbell comes in. He’s got the size and athleticism to be a three-down player in the NFL.

The Giants need to replace James Bradberry, so that’s what they should do with their first-round pick. Devon Witherspoon isn’t quite six feet tall, but he makes up for his lack in size with incredible speed.

The Jaguars have real issues with their cornerback. It’s why they have the lowest ranking against the pass at a point during the season. So, hopefully they’ll get to draft one of the top, rookie cornerbacks. That would be Max Melton, a fast, athletic player who receivers can’t outrun.

Getting a cornerback like Cam Smith in the first round only seems possible if everyone else needs to pick someone else. He’s a physical, explosive cover man, especially for his size, and has the potential to become a more polished, well-rounded, and consistent player. And with miserable secondaries right now, the Vikings are in desperate need of someone like Smith.

Kayshon Boutte would make for an excellent wide receiver. He has a good blend of perimeter field-stretching and inside route toughness. And the Ravens have been struggling offensively since Rashod Bateman has been out of the lineup. He’s make an excellent receiver for Lamar Jackson.

The Chargers have given up on Jerry Tillery. But, they still need help on the defensive line anyway. They’re still really bad against running plays. Mazi Smith has shown to be a monstrous nose tackle who can generate a pass rush.

The Seahawks need to continue adding to their defensive line. Their pressure rate is in the top ten worst in the NFL. Tuli Tuipulotu had an incredible 2022 season and he used his explosiveness and dexterity to great effect while on the field.

Soon, Jamel Dean will be a free agent. So the Buccaneers will be in need of proper personnel to defend their passing attacks. And Christian Gonzalez is a tall cornerback who is fast and athletic.

The Lions need to address their secondary if they ever want to stop the pass. And Joey Porter Jr. certainly has potential. They could really use his size, speed, and physicality on the team.

Kenny Pickett had some bright spots in his rookie season. Although it would be helpful if he had a left tackle to block his blind side. Jaelyn Duncan’s showed some solid athleticism in college football. Bringing him onto the team might be just what the Steelers need.

The Commanders have a real problem with covering anyone. William Jackson has been a complete bust as far as free agents go. They need someone that can stay with A.J. Brown and CeeDee Lamb, and Brian Branch has the size and cover ability to do it.

The Packers need a new receiver. And by this point, two of the top prospects will probably be off the board. So they should probably recruit someone for their offensive line instead. Paris Johnson has great athleticism and would make an excellent lineman. He can both tackle and guard.

The Patriots need offensive line help, but they also could stand to address their pedestrian receiving corps. Jaxon Smith-Njigba has shown amazing speed and athleticism. He’s well sought after due to his speed, quickness, and route-running skills.

Mekhi Becton has been a pretty big disappointment. It seems as thought the Jets need a new offensive tackle. And Tyler Steen looks like quite the player. He did a great job on Bryce Young’s blind side after transferring from Vanderbilt.

The Texans are in need of a second receiver, across from Brandin Cooks, in the near future. Getting a wide receiver like Quentin Johnston on the team would certainly be helpful. Johnston’s even been compared to Julio Jones.

Isaiah Foskey certainly seems like a good option with his powerful, explosive, and technically sound game. He has the potential to become more well-rounded for the NFL the more he develops as a run defender. And with Brandon Graham on the verge of leaving, the Eagles will soon be in need of an EDGE defender.

After going from Baker Mayfield to P.J. Walker, and then circling back to Sam Darnold in a run-heavy offense, it’s pretty clear that the Panthers need to get their quarterback situation in order. And that’s where Will Levis will come in. He’s a solid pocket passer, with the arm, accuracy, and quick release to thrive on the team. That is, as long as he has the right support.

The Falcons’ pressure rank has been abysmal in the last two seasons. Dead last, in fact. There’s plenty of talent in the defensive line for the 2023 draft, so the Falcons should pick up the best player they can. Myles Murphy has great potential as a 3-4 defensive end, but could also be a 4-3 EDGE.

The Raiders really seem to be in the need of a new quarterback. And that would be where Anthony Richardson would come in. He’s got a great arm and great athleticism. Although, he hasn’t had a particularly consistent time on the field since his 2022 debut.

The Lions could use a rangy bookend to help compliment Aidan Hutchinson. Tyree Wilson is explosive and versatile, even more impressive considering his size. He can play a multiple of impact positions along a front seven.

Jalen Carter has shown himself to be a dominant and disruptive force on the field. And the Seahawks need to do a better job of getting to the quarterback and stopping runs. With Carter on their team, they might finally patch the weaknesses in their defense.

The Colts received Matt Ryan, Nick Foles, and Sam Ehlinger after an absolute QB mess. The idea here is to get into a position where they don’t have to recycle veteran quarterbacks anymore. They may not land C.J. Stroud, but Bruce Young would be an excellent alternative. At this point, anyone would be hard pressed to choose between the two of them.

Kyler Murray could really benefit from an upgrade in the backfield. And that’s where Bijan Robinson would come in. He’s a running back with sky-high level attributes, certainly worth picking in the first round of the draft.

The Texans aren’t exactly guaranteed to get their quarterback of choice, but they’re still going early enough to get a chance. Of course, they also need to answer the question of if they want Ohio State’s C.J. Stroud or Alabama’s Bryce Young. For this mock-up, however, it seems as though Stroud is somewhat more likely.

The Bears will be picking first overall for the first time since 1947. They should be fine as far as quarterbacks go, having Justin Fields and all. The ideal decision would be the Bears trading down for extra first-down selection power, but if they stay in first, they may just pick Will Anderson Jr. He’s an active all-around playmaker that would help fill the hole made by Khalil Mack. Especially after saying bye to Robert Quinn and Roquan Smith.