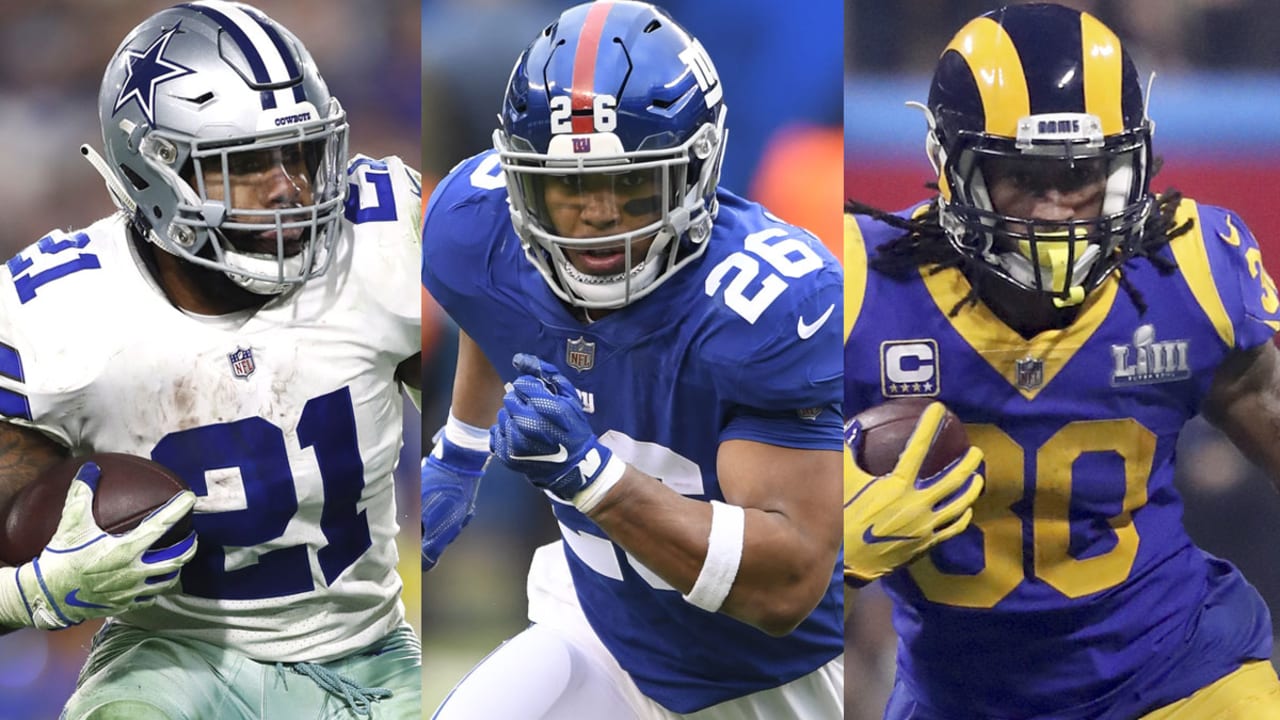 The running back is an important part of any football team’s offense. The quarterback gets most of the glory, but running backs are important receivers and targets. And these are some of the most skilled running backs in the in the NFL.

After losing his job in Indianapolis, Marlon Mack’s got to really up his game with the Texans. His torn Achilles tendon and Jonathan Taylor’s subsequent rise were the main contributing factors to Mack’s departure. With Davis Mills Mills as the quarterback now, hopefully Mack will get the opportunity to prove himself.

Miles Sanders got banged up pretty bad last season. Not to mention, the Eagles rotate their running backs more, with a few other skilled runners in the mix. He’s still his team’s number one running back, but it seems as though he may not hold that position for much longer.

Breece Hall is the rookie RB1 for this Jets this year, replacing Michael Carter from last season. They drafted him because of his performance at the collegiate level, leading FBS in rushing yards and touchdowns from 2019 to 2021. He’ll probably be in charge of jump-starting Mike LaFleur’s run game.

The Dolphins running game is about to either break down or break out. They have a talented group of running backs, including Mostert, who’s likely to lead the group in touches. He currently leads his team in rushing yards and touchdowns. Although, his success is based on his health. He’s missed 24 games over the last two seasons.

Jacobs had a promising rookie career, but his amount of carries has decreased. His legs have gotten a lot of milage after only three seasons and he’s gotten banged up as well. He’s never played a full season, so him being able to handle being a starter is an uncertainty.

Clyde Edwards-Helaire had excellent stats during his first six games. But his average went down a lot in the last 17. The Chiefs need to focus more on running plays and efficient carries. He needs to take better advantage of his opportunities, especially with a hungry newcomer like Ronald Jones II.

Gibson has been quietly producing in Washington for a while. He’s one of the five running backs with 1,000 scrimmage yards and 10-plus touchdowns in the past two seasons. The problem is that, after his big performances, he disappears for a long time. He’s not a particularly consistent player, hence his ranking.

Rashaad Penny got more rushing touchdowns in his last five games than in his entire career. Chris Carson’s retired, so Penny’s going to need to become more consistent to help carry his load. Otherwise, Kenneth Walker III will probably take away some of his opportunities.

This one has nothing to do with skill, but all about how misused Devin Singletary is. He just hasn’t been able to do his job with the low number of running plays the Bills have done. Josh Allen totaled 29% of Buffalo’s carries last season in fact. Singletary led the the Bills in carries, rush yards, and rush TDs though. He’s one of he most elusive backs in the league, but he doesn’t get enough usage.

Cordarrelle Patterson is a versatile playmaker who’s really started to excel as a running back. A year ago, he got 153 carries. The Falcons benefit from his skill, changing from a receiver to a running back. While he may not be the best, his position change was still good enough that he ranks over nine other running backs on this list.

Cam Akers did an excellent job coming back to the game after his injury to his Achilles tendon. He’s back at 100% and has the opportunity to be the guy in the Rams’ backfield for the season. He might not get a lot of carries, but he has the capability to really book it when he gets the ball.

Conner signed a three-year contract for $21 million. He’s just outside of the top 20 in this list, but that doesn’t mean he’s bad at his job. Why else would have gotten that contract? He’s missed a few games in his all of his seasons, and the Cardinal’s offense is still centered around Kyler Murray’s ability as a passer. He’s still used to Arizona’s passing attack, getting a substantial increase in the number of touches he got last season.

Travis Etienne missed his rookie season because of a Lisfranc injury. While he’s back in action now, it’s best to go with James Robinson as the faithful choice. He’s racked up 2,403 scrimmage yards and 18 touchdowns. And that was before tearing his Achilles tendon in week 16 last season. Now he’s healthy and back at camp.

It’s been hard to rank Leonard Fournette. Sometimes he’s giving an amazing performance, breaking through defensive lines to win the Bucs the Super Bowl. But other times, he tends to get very few carries, if any at all, when the Bucs lose. There were some concerns about his weight, but he insisted that he’d get back into shape for the season.

Saquon Barkley’s a good player, but he just hasn’t been available for most of his career. He led the NFL with 2,028 scrimmage yards in his rookie season. And since then, he’s compiled 2,391 scrimmage yards in 28 games since 2019. When healthy, he’s a great playmaker. But he really has to produce more and more consistently to be higher on this list.

Damien Harris proved that he was going to be a workhorse for the Patriots, breaking into the game alongside quarterback Mac Jones. His stats demonstrate Harris’ efficiency and how instrumental he is the the Patriots’ ground game. He gets fewer opportunities to run the ball as Jones’ develops, as well as the second year back Rhamdondre Stevenson. That’s why Harris ranks here on the list.

Elijah Mitchell had an excellent rookie season, filling in for Jeff Wilson Jr. after he was injured. This year, he’ll be the starting RB!. And we’ll see if he can play the game without getting injured and handling the position in Kyle Khanahan’s offense.

J.K. Dobbins was poised to break out after he average 82.5 rushing yards per game in his last six regular season games in 2020. Unfortunately, a knee injury kept him from playing in the 2021 season. People are uncertain whether or not he’ll actually even play at the beginning of the 2022 season. However, Dobbins, himself, voiced how he was ready to be the starter on social media.

David Montgomery has been one of the few bright spots in the Bears’ offense lately. He got 1,919 rushing yards in the 2020 season after all. It just depends on if the Bears actually want to run the ball. He only average 16 attempts to game, which is all that’s really holding him back from a higher rank on this list.

Jamaal Williams was a good addition to Detroit, but Swift is a good RB1 if he stays healthy. He’s a dual threat with explosiveness and long speed, poised for a breakout year. That is, if he’s available for the full season. Hopefully he’ll get more than the 10.2 carries per game he averaged since entering the NFL in 2020.

Jones and AJ Dillon had amazing production last season. They each compiled over 1,100 scrimmage yards. Yet, it will likely be Jones that maintains the RB1 position. He’s a special player when it comes to the run game. Although, his pass-catching ability will become more important with the departure of Davante Adams.

The Broncos traded away Russell Wilson to push the offense back up, but they’ll need to up their run game. And that’s what Javonte Williams is for. He’s been quite productive as a rookie, with 63 missed tackles forced on runs and 694 rushing yards after contact. He’ll remain a huge part of the Broncos offense this coming fall.

When it comes to Christian McCaffrey, you never really know what you’re going to get. He’s talented for sure, but he’s missed 23 games over the last two seasons. He’s also incredibly important to the Panthers’ success. if he’s healthy for the whole season, he’ll no doubt be a high-value Running back. Otherwise, we’ll just have to see.

With Ben Roethlisberger not in the spotlight anymore, the Steelers’ offense is ready to go through Najee Harris. He had a great rookie season, with no fumbles and 381 touches during the regular season. He’s durable and ready to lead the unit in the run game to provide a big boost in the pass game.

Austin Ekeler had 20 scrimmage touchdowns last season, yet he’s somehow still a sleeper in the Chargers’ offense. That’s cause it’s built to throw the ball to high-end receivers. He’s still a great playmaker and a perfect fit for Joe Lombardi’s offense.

Joe Burrow isn’t the only quarterback to benefit from a revamped offensive line. Joe Mixon’s run game was ranked 23rd in the NFL last season for his run game. The Bengals were at their best last season when Mixon was able to run the ball. Considering some of their pass-play failures, it would make sense for Cincinnati to give Mixon more of a chance to show off.

Alvin Kamara had 24.6% of all of New Orleans’ total scrimmage yards in 2021. The Saints expect him to be a big part of their offense this season. He’s one of the most versatile playmakers in the backfield and he should be fresh well into the season.

A lot of people have been bringing down Ezekiel Elliot and talking up Tony Pollard, especially after Pollard out-gained Zeke by 1.3 yards last season. However, that might not mean as much as you think. Elliot was a little banged up last season and still does everything the Cowboys need him to. And he’s looking good headed into this season.

Dalvin Cook is one of the most explosive running backs in the NFL. He’s averaged the second most scrimmage yards per game in the league since 2019. The Vikings are at their best when they hand the ball off to Cook. And the new coach, Kevin O’Connell, will likely be aware of this fact.

Nick Chubb is going to have to take up a lot of responsibility while Deshaun Watson is out. He’s been exceptional throughout his first four seasons. There’s a lot of confidence in his ability to carry his team. He’ll likely give another monster season this year.

Jonathan Taylor led the NFL in nearly every major rushing category last season. He’s a major part of the Colts’ offense and will continue to be throughout this season. The only real question is whether or not he can actually produce another season.

Derrick Henry missed nine games last season due to a foot injury, yet still finished ninth in the league. He’s still in a league of his own, and he doesn’t have any intention of slowing down in his seventh years in the NFL.